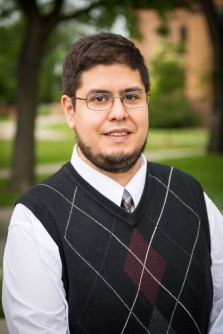 His research has been published in numerous journals, including Anales del Instituto de la Patagonia, Journal of Medical Entomology, The Great Lakes Entomologist, Iberian Journal of Arachnology and Zootaxa.

“Having that amount of publications seems a little hard to believe, but it’s honoring at the same time,” said Faundez, who grew up in Punta Arenas, Chile. “A while ago, I was thinking about reaching that number by the age of 50 or so. However, since I started my doctoral studies, I have had access to several funding grants and I have traveled to important museums like the Smithsonian. That gave me a lot of material to work on.”

Faundez credits his faculty adviser, David Rider, professor in the NDSU School of Natural Resource Sciences, for his encouragement to take on a variety of projects as he works in Rider’s lab. “I feel really fortunate to have these opportunities and being at a place that allows me to grow professionally,” he said. “Currently, I have a lot of projects going on, including new species from all over the world, medical entomology, teratology (specimens with malformations) and new distributional data.”

The research Faundez has produced is both sweeping and varied.

A sampling of the 17 species he has discovered includes:

• A fossil species of toad bug named “Nerthra subantarctica,” described in conjunction with Ashworth, who collected it in one of his early trips to the subantarctic region of South America.

In addition, Faundez discovered the false widow spider Steatoda triangulosa in North Dakota, which had not been identified before in the state. He also gave the first report of a bite by the false widow Steatoda nobilis in South America, which was featured in several media reports across the continent.

To put his accomplishments in perspective, Rider said faculty are pleased if a doctoral student publishes four to five papers and students who publish 10 articles are considered exceptional.

“You can see by how much Eduardo has exceeded the exceptional level,” Rider said. “Eduardo came to NDSU with professional experience, and knew how to write manuscripts and get them published. But still, the amount of research he has conducted and the number of papers he has published are truly remarkable. Furthermore, Eduardo tries to make it fun. When describing new genera and species, he often comes up with popular names drawn from recent books or movies.”

As he works toward his doctorate, Faundez is collaborating with colleagues at universities across the globe. His research portfolio, along with his renown, continue to grow.

“Although I´m reaching a nice number of publications, there is a lot yet to do,” he said. “It just encourages me to go further, because there is so much more work to do and I´m really happy writing these articles.”