NDSU Researchers to Receive Up to $9.62 Million for Center for Pancreatic Cancer Research 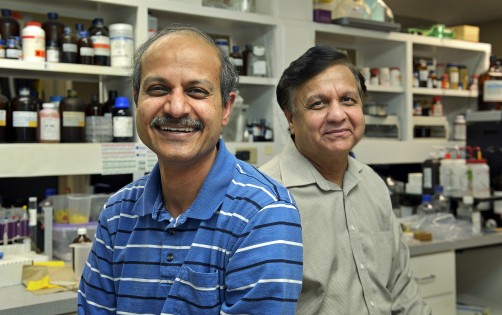 Sanku Mallik, professor of pharmaceutical sciences in the College of Health Professions at North Dakota State University, Fargo, and D.K. Srivastava, a James A. Meier Professor of chemistry and biochemistry in the College of Science and Mathematics, have been awarded a Phase One grant to establish the Center for Diagnostic and Therapeutic Strategies for Pancreatic Cancer at NDSU. The Center for Biomedical Research Excellence (COBRE) award carries the potential for grant funding of up to $9.62 million. The award from the National Institutes of Health is being used to establish a research center aimed at early diagnosis and treatment of pancreatic cancer.

Newswise — John Runsvold takes pancreatic cancer personally. As a survivor, John is active in the Fargo/Moorhead Pancreatic Cancer Awareness Group and The Angel of Hope group of Fargo. John, once a student at North Dakota State University and his wife Cyd, a graduate of the NDSU pharmacy program, say they see the value in a new center at NDSU, dedicated to researching ways to diagnose the deadly cancer earlier, and to developing therapeutic approaches that target the proliferation of pancreatic cancer cells.

Researchers in NDSU’s College of Health Professions and College of Science and Mathematics are receiving an Institutional Development Award (IDeA), Center for Biomedical Research Excellence (COBRE) grant of up to $9.62 million. The award from the National Institutes of Health is being used to establish a research center aimed at early diagnosis and treatment of pancreatic cancer.

Sanku Mallik, professor of pharmaceutical sciences in the College of Health Professions at NDSU, and D.K. Srivastava, a James A. Meier Professor of chemistry and biochemistry in the College of Science and Mathematics, have been awarded a Phase One grant of $2 million. They are using the funds to establish a Center for Diagnostic and Therapeutic Strategies for Pancreatic Cancer—the first disease-specific research center at NDSU.

“This award speaks to the high quality research performed by NDSU faculty and students in the pursuit of cancer treatment breakthroughs,” said Kelly A. Rusch, vice president for research and creative activity at NDSU. “This COBRE award will allow NDSU to significantly grow its capacity in this area through the mentoring of top-notch junior faculty and the recruitment of additional faculty.”

The grant will fund two additional junior faculty positions and will support up to 12 graduate students who will conduct fundamental studies on diagnostics, drug delivery and treatment of pancreatic cancer.

Researchers at NDSU’s center will collaborate with colleagues at the University of Nebraska Medical Center, including pancreatic cancer researcher Michael Hollingsworth of the medical center’s Eppley Institute for Research in Cancer and Allied Diseases. NDSU researchers also will have access to the medical center’s pancreatic cancer tissue bank. The center at NDSU will conduct fundamental research with a focus on diagnostic and therapeutic tools for controlling the onset and proliferation of pancreatic cancer, Srivastava said. He said the successful grant application was a byproduct of his and Mallik’s collaborative research work over the last 12 years.

The five-year survival rate for pancreatic cancer patients is approximately 7 percent, according to the National Cancer Institute. Life expectancy after diagnosis is often six months or less, Mallik said. A lack of early symptoms, short survival time and resistance to therapy are hallmarks of this deadly disease.

“And unlike other forms of cancer, the rate of pancreatic cancer is increasing,” Mallik said.

The Phase One COBRE grant is awarded through the NIH’s National Institute of General Medical Sciences. The center can become eligible for up to two five-year renewals. Centers of Biomedical Research Excellence support thematic, multidisciplinary centers that augment and strengthen institutional biomedical research capacity, according to the NIH.

Mallik and Srivastava’s grant marks the third such COBRE program at NDSU. Mark McCourt, James A. Meier and Dale Hogoboom professor of psychology, established the Center for Visual and Cognitive Neuroscience in 2004. Mukund Sibi, University Distinguished Professor and James A. Meier Professor of chemistry and biochemistry, established the Center for Protease Research in 2001.

Mallik received his Ph.D. in organic chemistry from Case Western Reserve University and a bachelor’s degree in chemistry from the Indian Institute of Technology, Kharagpur, India.