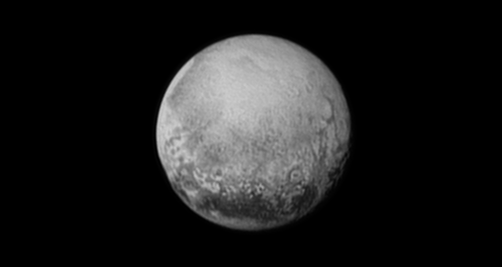 ATLANTA – The moment is finally here: after a decade of travel, the New Horizons probe is about to encounter Pluto. Flying faster than a speeding bullet – literally – the probe has to perform complex maneuvers, and go completely silent before scientists on Earth will hear anything, a Georgia State University astronomer says.

Making the encounter more nerve-wracking is that beyond the probe’s distance and limited maneuverability, the probe can either make observations, or transmit data – but not both. New Horizons is working on only 200 watts of power – enough to power only a handful of old-fashioned, incandescent light bulbs.

“What has been happening is that the mission has been emptying memory banks so it can store data,” Lepine said. “It’ll send us one last, nice picture of Pluto for us, and then there’ll be a blackout – it’ll be shooting pictures for at least 48 hours before it even starts to send back any data.”

While the probe can’t stop, and its cameras cannot move, it can twist and turn to observe Pluto and its smaller moons – Charon, Nix and Hydra – and then point its transmitter back to Earth. The data transmission will be almost painfully slow – at 1 kilobit per second, thousands of times slower than any cell phone or computer network on Earth.

“The probe will first select just 1 percent of the images it takes – two dozen or so – to transmit back to us in the next week or so,” Lepine said. “It will be September or November for all of the images to reach us.”

For more about astronomy at Georgia State University, visit http://www.astro.gsu.edu/.