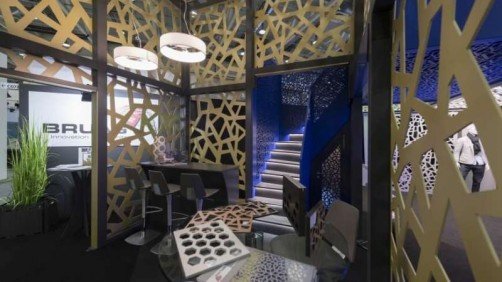 Laser cut decorative wooden and HPL-elements can be equipped with fireproofing now. 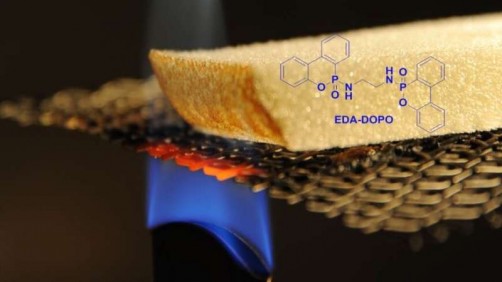 Foam sample with EDA-DOPO in a flame test in the Empa laboratory.

Newswise — Fire protection requirements are increasing worldwide - especially in public buildings and vehicle construction. This development means that more and more otherwise suitable materials such as wood can no longer be used in many buildings or means of transport and must be substituted by other products. The aim of the CTI funded research project was therefore to develop a flame retardant that increases the fire resistance of such materials without impairing the positive properties of the materials.

The new flame retardant called AFA (Anti-Flame-Additive) meets these requirements: It is colorless and can be mixed with water-based paints or UV protective coatings and can be used not only as a coating but also as an additive in wood-based panels. In addition, it is free of bromine and boron and contains no halogenated organic compounds. It produces no toxic vapors and develops its flame-retardant effect at concentrations as low as ten percent.

AFA is based on the substance EDA-bis-TEPT developed by Empa, a flame retardant from the class of organophosphonates. It combines phosphorus and nitrogen moieties in a single molecule, which has flame-retardant effects on cellulose.  The newly developed additive has already demonstrated its effectiveness in internal tests and has been protected by a patent application since 2018. Application tests are currently being carried out, for example the addition of AFA to various commercially available building materials and paint systems is being tested.

Initial tests with major wood-based panel manufacturers have been very positive. The same applies to the world's third largest manufacturer of HPL (High Pressure Laminates). After the AFA has been introduced into the cellulose during production, flaming of the material is reliably prevented. In a further step, AFA will undergo the fire protection and approval tests required for approval.

Empa's research partner in this project is Bruag Fire Protection AG, a sister company of Bruag AG based in Güttingen, TG. As a producer of smooth and perforated weather-resistant facade panels and balcony balustrades as well as decorative elements such as room dividers, stair railings or acoustic solutions for interiors, which are mainly based on wood-based materials. The internationally active Bruag AG is directly affected by stricter fire protection guidelines.  In Switzerland, for example, a new fire protection regulation was introduced in the building industry in 2015. Even internationally, the demands on fire protection are constantly increasing. At the same time, environmental guidelines are being tightened, which is gradually pushing conventional fire protection agents out of the market. As a result of these developments, Bruag AG is constantly on the lookout for suitable flame retardants. However, because no suitable product was available on the market, Bruag decided to take the initiative. The company, which is experienced in product and process innovations, found Empa to be the ideal research partner.

Another flame retardant developed at Empa is called EDA-DOPO and is already one step further on the way to commercial application. EDA-DOPO belongs to the class of phosphonamidates, contains no halogens that are harmful to the environment and has been registered in the EU chemical database REACH since autumn last year.

The registration of a newly developed substance is very time-consuming and represents an important milestone for commercial marketing: REACH-registered substances are considered safe for humans and the environment. They may also be transported in large quantities throughout the EU without a hazardous goods class and can also be used in residential buildings, public buildings and in public transport.

EDA-DOPO is currently used for mattress foams. Applications in the coating technology as well as in the plastic production are also in exploration.