Research and reporting focus is on conservation of Long Island waters 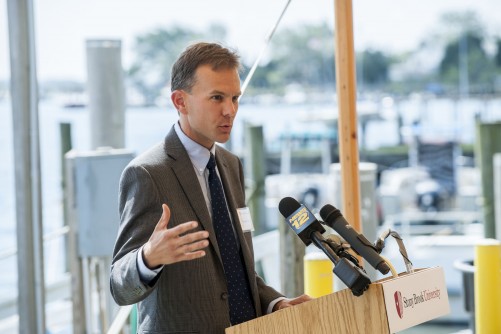 Newswise — Stony Brook, New York, April 1, 2014 – In response to increased pollution in Long Island coastal waters, experts from Stony Brook University’s School of Marine and Atmospheric Sciences (SoMAS) are launching the “Long Island Coastal Conservation and Research Alliance” (LICCRA), the mission for which is to engage in research and monitoring that can be used to protect and restore Long Island coastal ecosystems. Led by SoMAS Professor Christopher Gobler, LICCRA’s focus is to communicate important research findings to the public and to local, town, county, state, and federal government officials to ensure important regional findings are received by the individuals with the means to directly address key coastal issues. LICCRA will focus on multiple traditional coastal water quality issues such as harmful algae and hypoxia or low dissolved oxygen and how these factors affect fisheries. It will also investigate emerging coastal issues such as ocean acidification and other climate change processes. Research will be conducted by a team of Stony Brook University research scholars, graduate and undergraduate students and research technicians. Gobler says the new alliance will help meet the evolving needs of Long Island, given the degradation that we have seen in our coast waters in recent years. He says nitrogen loading from waste water and sewage to our bays has increased significantly, the incidence of red, rust, brown, and blue-green algal blooms have increased, while vital marine habitats such as seagrasses have declined by 90% and key fisheries such as clams and scallops have diminished by more than 99%. “LICCRA will assess coastal ecosystem issues from Merrick to Montauk, from Long Island Sound to Lake Ronkonkoma to Great South Bay, and, importantly, will function as an alliance,” said Gobler. “In that capacity, the Alliance will rapidly share and communicate its findings with the public and decision makers, so that the steps necessary to protect and conserve our coastal resources can be taken. Given the linkages between clean water, fisheries, tourism, and home values, these issues all are central to Long Island’s economic vitality.” The first official LICCRA event, a public seminar entitled “State of the Bays, 2014: Nitrogen loading, estuarine flushing, and the fate of Long Island’s coastal waters,” takes place on Friday, April 4th at 7 pm in Duke Lecture Hall on the Southampton Campus of Stony Brook University. It is free and open to the public. During the seminar, Dr. Gobler will review events in Long Island coastal waters in 2013, as well as new research findings directly related to Long Island’s bays, harbors, and estuaries. Before and after the seminar, Stony Brook University research scholars and graduate students will display posters based on recent research of Long Island’s coastal zones.

A multi-pronged social media approach will be launched to facilitate communication, including an active Facebook page (www.facebook.com/liccra) so activities, developments and findings may be shared with the public as they become available. For more information contact Christopher Gobler, 631-871-2109.