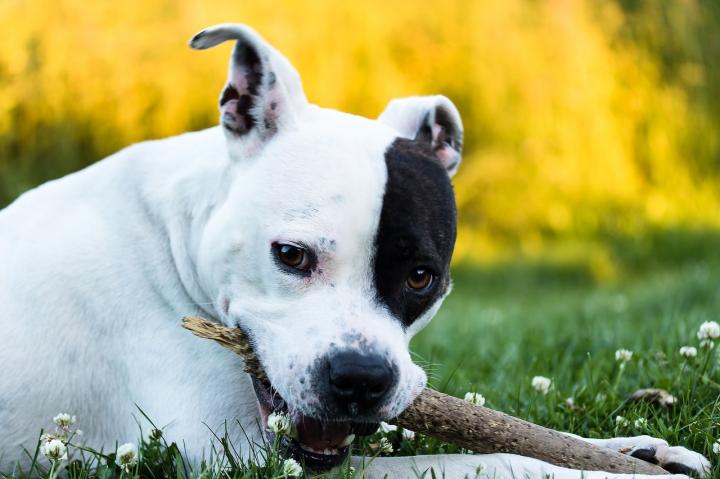 According to the study tail abnormalities in the American Staffordshire Terriers were less severe than the screw tails typically seen in English Bulldogs, French Bulldogs and Boston Terriers.

Newswise — A recent genetic study at the University of Helsinki provides new information on the occurrence of a DVL2 gene defect associated with a screw tail and its relevance to canine constitution and health. The variant was found in several Bulldog and Pit Bull type breeds, and it was shown to result in caudal vertebral anomalies and shortening of the muzzle. The DLV2 variant may also affect the development of the heart.

Dog breeding is often focused on appearance. In some breeds, the ideal body shape is bulky, with a broad head and short muzzle, short legs and a very short and kinked tail, also known as a "screw tail". In a previous study in the United States, screw tail was linked to a variant in the DVL2 gene. The variant has become enriched in English Bulldogs, French Bulldogs and Boston Terriers due to inbreeding. In addition to the shape of the tail, the DVL2 variant was suggested to contribute to other features typical of the above breeds, as well as what is known as the Robinow-like syndrome. However, its specific effects on body shape and health remained unclear at the time.

"In this study, we wanted to further investigate the frequency of the DVL2 variant in different dog breeds and determine its effects on skeletal development. The variant was identified in several Bulldog and Pit Bull type breeds, some of which had both the normal form and the genetic variant. This made it possible to investigate the consequences of the variant," says doctoral researcher Julia Niskanen from the University of Helsinki and the Folkhälsan Research Center.

The prevalence of the DVL2 variant varied greatly between breeds. All of the English Bulldogs, French Bulldogs and Boston Terriers in the study were homozygous for the variant, that is, they had inherited the variant from both parents. In other words, the normal form of the gene was not found in these breeds. Both the variant and the normal form were found in the American Staffordshire Terriers, Staffordshire Bull Terriers, Dogues de Bordeaux, Olde English Bulldogges and American Bulldogs.

To determine the effect of the variant on body shape, the researchers analysed the skeletal anatomy of American Staffordshire Bull Terriers of different genotypes through computed tomography scans carried out at the Veterinary Teaching Hospital. The results clearly showed that the DVL2 gene defect results in caudal vertebrae anomalies in homozygous state.

"However, tail abnormalities in the American Staffordshire Terriers were less severe than the screw tails typically seen in English Bulldogs, French Bulldogs and Boston Terriers. In contrast to the previous study, we did not find an association between the DVL2 variant and thoracic vertebral anomalies," says veterinarian and Clinical Instructor Vilma Reunanen from the Faculty of Veterinary Medicine, University of Helsinki.

"In addition to the effects on the skeletal system, we discovered that several dogs homozygous for the DVL2 variant had a congenital heart defect. However, this is a preliminary finding that requires further study. If confirmed, it could partially explain the prevalence of congenital heart defects in certain breeds," doctoral researcher Niskanen adds.

"Besides the DVL2 gene defect, many breeds also have other genetic variants that affect body shape. Their combined effects may result in serious health problems. For example, a short muzzle predisposes dogs to brachycephalic obstructive airway syndrome (BOAS), whose symptoms include breathing difficulties and low exercise tolerance. The prevalence of the gene defect demonstrates that in certain breeds, DVL2-related health problems can be prevented with gene tests. In some breeds, there is no longer any variation, which makes it impossible to improve the situation with current breeding programmes," explains Docent Marjo Hytönen from the University of Helsinki and the Folkhälsan Research Center.