21-Jun-2017 9:15 AM EDT, by Perelman School of Medicine at the University of Pennsylvania contact patient services
favorite_border 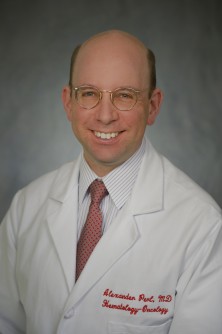 Newswise — PHILADELPHIA – A new drug shows promise in its ability to target one of the most common and sinister mutations of acute myeloid leukemia (AML), according to researchers at the Perelman School of Medicine at the University of Pennsylvania and Penn’s Abramson Cancer Center. The Fms-like tyrosine kinase 3 (FLT3) gene mutation is a known predictor of AML relapse and is associated with short survival. In a first-in-human study, researchers treated relapsed patients with gilteritinib, an FLT3 inhibitor, and found it was a well-tolerated drug that led to frequent and more-sustained-than-expected clinical responses, almost exclusively in patients with this mutation. They published their findings today in The Lancet Oncology.

FLT3 is one of the most commonly mutated genes in AML patients. FLT3 mutations are found in about 30 percent of patients’ leukemia cells. Clinically, these mutations are associated with aggressive disease that often leads to rapid relapse, after which the overall survival is an average of about four months with current therapies. To avoid relapse, oncologists often recommend the most aggressive chemotherapy approaches for patients with FLT3 internal tandem duplication (FLT3-ITD), including marrow transplantation. But even that cannot always stave off the disease.

The FLT3 gene is present in normal bone marrow cells and regulates the orderly growth of blood cells in response to daily demands.  When the gene is mutated in a leukemia cell, however, the mutated cells grow in an uncontrolled manner unless the function of FLT3 is turned off.

“Other drugs have tried to target these mutations, and while the approach works very well in the laboratory, it has proven very challenging to develop FLT3 inhibitors in the clinic for several reasons,” said Alexander Perl, MD, MS, an assistant professor of Hematology Oncology in Penn’s Abramson Cancer Center and the study’s lead author. “First, we’ve learned it takes unusually potent inhibition of the FLT3 target to generate clinical responses. Second, many of these drugs are not selective in their activity against FLT3. When they target multiple kinases, it can lead to more side-effects. That limits whether you can treat a patient with enough drug to inhibit FLT3 at all. Finally, with some FLT3 inhibitors, the leukemia adapts quickly after response and cells can develop new mutations in FLT3 that don’t respond to the drugs at all. So ideally, you want a very potent, very selective, and very smartly designed drug. That’s hard to do.”

For this phase 1/2 clinical trial, Perl and his team evaluated the drug gilteritinib – also known as ASP2215 – at increasing doses in patients whose AML had relapsed or was no longer responding to chemotherapy. The team focused on dose levels at 80mg and above, which were associated with more potent inhibition of the FLT3 mutation and higher response rates. They found these doses were also associated with longer survival. Of the 252 patients on this study, 67 were on a 120mg dose and 100 were on a 200mg dose. Seventy-six percent (191) of the patients on the trial had a FLT3 mutation. Overall, 49 percent of patients with FLT3 mutations showed a response. Just 12 percent of patients who didn’t have the mutation responded to the drug.

“The fact that the response rate tracked with the degree of FLT3 inhibition and was so much lower among patients who did not have an FLT3 mutation gives us confidence that this drug is hitting its target,” Perl said.

The drug was also generally well-tolerated. The three most common side effects attributed to the drug were diarrhea in 41 patients (16 percent), fatigue in 37 (15 percent), and abnormal liver enzyme tests in 33 (13 percent). These generally were mild in severity and discontinuation of gilteritinib for side effects was uncommon (25 patients, 10 percent).

“These look like data you want to see for a drug to eventually become a standard therapy,” Perl said, though he noted more research will be necessary.

A new multicenter trial, which compares gilteritinib to standard chemotherapy in patients with FLT3 mutations who relapsed or did not respond to initial therapy, is now underway, and Penn’s Abramson Cancer Center is one of the sites.

There are also studies underway that give the drug in combination with frontline chemotherapy and as an adjunct to bone marrow transplantation in hopes of preventing relapse altogether.

Astellas Pharmaceuticals, Inc., which manufactures gilteritinib, provided funding for this study and performed statistical analysis of the data gathered by the investigators. Additional funding was provided by a National Cancer Institute Leukemia Specialized Program of Research Excellence Grant (CA100632) and by an Associazione Italiana Ricerca sul Cancro award.

Editor’s Note: Dr. Perl has served as a consultant to Astellas.