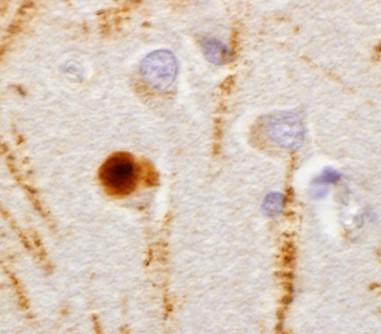 Lewy body (brown) from the brain of a Parkinson's disease patient.

Newswise — PHILADELPHIA — Using powerful, newly developed cell culture and mouse models of sporadic Parkinson’s disease (PD), a team of researchers from the Perelman School of Medicine at the University of Pennsylvania, has demonstrated that immunotherapy with specifically targeted antibodies may block the development and spread of PD pathology in the brain. By intercepting the distorted and misfolded alpha-synuclein (α-syn) proteins that enter and propagate in neurons, creating aggregates, the researchers prevented the development of pathology and also reversed some of the effects of already-existing disease. The α-syn clumps, called Lewy bodies, eventually kill affected neurons, which leads to clinical PD. Their work appears this week in Cell Reports.

Earlier studies by senior author Virginia M.Y. Lee, PhD, and her colleagues at Penn's Center for Neurodegenerative Disease Research (CNDR) had demonstrated a novel pathology of PD in which misfolded α-syn fibrils initiate and propagate Lewy bodies via cell-to-cell transmission. This was accomplished using synthetically created α-syn fibrils that allowed them to observe how Parkinson’s pathology developed and spread in a mouse and in neurons in a dish. The present study is a proof-of-concept of how these models might be used to develop new PD therapies.

"Once we created these models, the first thing that came to mind is immunotherapy," says Lee, CNDR director and professor of Pathology and Laboratory Medicine. "If you can develop antibodies that would stop the spreading, you may have a way to at least retard the progression of PD." The current work, she explains, uses antibodies that were generated and characterized at CNDR previously to see if they would reduce the pathology both in cell culture and in animal models.

Lee's team focused on anti-α-syn monoclonal antibodies (MAbs). "In animal models," Lee explains, "the question we want to ask is, can we reduce the pathology and also rescue cell loss to improve the behavioral deficits?"

Using their previously established sporadic PD mouse model, the researchers conducted both prevention and intervention preclinical studies. For prevention studies, they injected mouse α-syn synthetic preformed fibrils into wild-type, normal mice, as a control, and then immediately treated the mice with Syn303, one of the MAbs used (or IgG , another type of common antibody, for the control mice).

The control group without MAb administration showed PD pathology in multiple brain areas over time, while the mice treated with Syn303 showed significantly reduced pathology in the same areas. For intervention studies, they treated PD mice with Syn303 several days after fibril injections when Lewy bodies were already present. They found that the progression of pathology was markedly reduced in the Syn303-treated mice versus mice that did not receive Syn303.

"But there are some limitations to experiments in live mice since it is difficult to directly study the mechanism of how it works," Lee says. "To do that, we went back to the cell culture model to ask whether or not the antibody basically prevents the uptake of misfolded α-syn." The cell culture experiments showed that MAbs prevented the uptake of misfolded α-syn fibrils by neurons and sharply reduced the recruitment of natural α-syn into new Lewy body aggregates.

Next steps for the team will be to refine the immunotherapeutic approach. "We need to make better antibodies that have high affinity for pathology and not the normal protein," says Lee.

The team's models also open up new opportunities for studying and treating PD. "The system really allows us to identify new targets for treating PD," Lee says. "The cell model could be a platform to look for small molecular drugs that would inhibit pathology." Their approach could also serve as a foundation for genetically based studies to identify specific genes involved in PD pathology.

“Hopefully more people will use the model to look for new targets or screen for treatments for PD. That would be terrific,” concludes Lee.

The work was supported by an National Institute on Aging training grant (T32-AG000235), the National Institute of Neurological Disorders and Stroke Morris K. Udall Parkinson's Disease Center of Excellence (P50 NS053488), the Michael J. Fox Foundation, the Keefer family, and the Parkinson Council.