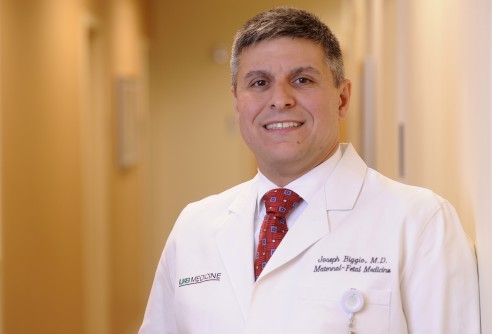 New research by Joey Biggio, professor and director of the University of Alabama at Birmingham Division of Maternal-Fetal Medicine in the Department of Obstetrics and Gynecology, find baby's genes and not the mom's may be the trigger that leads to some preterm births. "This still is very preliminary, and more investigation is needed; but the research clearly identified genetic regions associated with an increased risk of preterm birth,” Biggio said.

Newswise — BIRMINGHAM, Ala. – Some babies may be genetically predisposed to being born too soon, and variants in the DNA of the fetus — not the mother — may be the trigger for some early births.

That is the finding of research conducted by Joseph Biggio, M.D., professor and director of the University of Alabama at Birmingham Division of Maternal-Fetal Medicine in the Department of Obstetrics and Gynecology, and his colleagues from the Eunice Kennedy Shriver National Institute of Child Health and Human Development Genomics and Proteomics Network for Preterm Birth Research. The March of Dimes will present its award for Best Research in Prematurity to Biggio for this work during the annual Society for Maternal-Fetal Medicine meeting, which begins today in San Diego, California.

Biggio’s research analyzed the number of copies of certain segments of DNA in the blood or saliva from hundreds of babies and their mothers.

“These findings really open a whole different arena for us to look into as we think about preterm birth,” said Biggio, who was assisted by William Andrews, Ph.D., M.D., professor and chair of UAB’s Department of Obstetrics and Gynecology in UAB's School of Medicine, and others. “It causes us to think more critically about the role of the fetus in causing preterm birth. We’ve always thought about preterm birth as a maternal issue, but these data change the paradigm. It may be the fetus who has the underlying predisposition, not the mother. This still is very preliminary, and more investigation is needed; but the research clearly identified genetic regions associated with an increased risk of preterm birth.”

No link was established between the number of copies of the mother’s genes and the risk of preterm birth; however, there was a two- to 11-fold increase in preterm births before 34 weeks of gestation among infants in whom any of four genes was duplicated or any of seven genes was deleted.

“These findings may help explain what triggers early labor in some women even when they’ve done everything right during pregnancy and there’s no obvious cause for an early birth,” explained March of Dimes Chief Medical Officer Edward R.B. McCabe, M.D. “The hope is that this finding may one day lead to a screening test to help identify which babies are at a higher risk of an early birth.”

More than 450,000 babies are born too soon each year in the United States, and Alabama has one of the highest rates of preterm birth in the nation, at 15.1 percent. Preterm birth is the leading cause of newborn death, and babies who survive an early birth often face an increased risk of a lifetime of health challenges, such as breathing problems, cerebral palsy, intellectual disabilities and more. Even babies born just a few weeks early have higher rates of hospitalization and illness than full-term infants. It is a serious health problem that costs the United States more than $26 billion annually, according to the March of Dimes.

While the differences in the number of copies of the genes or gene regions may not directly cause a preterm birth, they may make a baby more susceptible to infection or reacting to other harmful environmental factors that trigger early labor and delivery, Biggio says.

“We don’t know exactly that it’s the genes in these areas,” Biggio said. “It may be something else; but these changes are in the areas of these genes, and that’s certainly the first place to start looking.”

It may also help explain why treatment with progesterone, a naturally occurring hormone in pregnancy shown to prevent some preterm births, works for only about one-third of women.

“We think we are treating the mother with progesterone, but perhaps we are actually treating the baby or changing the fetal-immune response,” Biggio said.

The Eunice Kennedy Shriver National Institute of Child Health and Human Development funded this research, which Biggio says emphasizes the importance of genetics and informatics to scientific discovery. This also reinforces the importance of UAB’s investment in data infrastructure and its hiring of renowned expert James Cimino, M.D., as the inaugural director of the UAB Informatics Institute.

“Genetics and informatics are going to be a key to our understanding of complex disease, and preterm birth is a prime example,” Biggio said. “If we can begin to understand the complexity of preterm birth and can work to prevent it, we will be able to avert significant health care expenditures and morbidity.”

About the Society for Maternal-Fetal MedicineThe Society for Maternal-Fetal Medicine (est. 1977) is the premier membership organization for obstetricians/gynecologists who have additional formal education and training in maternal-fetal medicine. The society is devoted to reducing high-risk pregnancy complications by sharing expertise through continuing education to its 2,000 members on the latest pregnancy assessment and treatment methods. It also serves as an advocate for improving public policy, and expanding research funding and opportunities for maternal-fetal medicine. The group hosts an annual meeting in which groundbreaking new ideas and research in the area of maternal-fetal medicine are shared and discussed. Visit www.smfm.org.

About the March of DimesThe March of Dimes is the leading nonprofit organization for pregnancy and baby health. For more than 75 years, moms and babies have benefited from March of Dimes research, education, vaccines and breakthroughs. Find out how you can help prevent premature birth and birth defects by joining March for Babies at marchforbabies.org. For the latest resources and information, visit marchofdimes.org or nacersano.org. Find us on Facebook and Twitter.