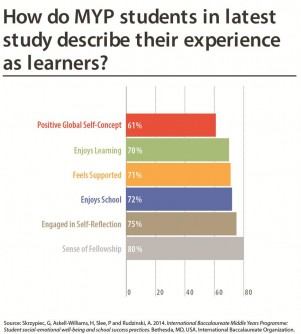 Newswise — Increasing amounts of research continue to support what educators have long recognized: social and emotional health plays a key role in determining students’ social and academic outcomes, not only in schooling but also later in life. In a new study conducted by Flinders University, researchers explored this issue by studying the well-being of students, ages 11-16 in Australia, who were enrolled in the International Baccalaureate (IB) Middle Years Programme (MYP), an educational framework in which social-emotional learning plays a significant role.

In this particular study, researchers examined students’ social-emotional well-being using three different scales to assess student self-perceptions of their mental health. The researchers found:• The majority of MYP students are flourishing: Researchers used several different metrics to determine whether students were flourishing—-defined as the ability to function effectively and feel good about themselves. Over 50% of students were considered to be flourishing. • Males in MYP are more likely to have better mental health than females in MYP, particularly in the upper years: Researchers found that males were more likely to flourish and have a positive outlook and a positive emotional state, while females were more likely to languish or have moderate mental health. These findings are consistent with a growing body of research indicating that adolescent females nationally and internationally are reporting more mental health challenges than boys. • More than half of MYP students have a positive outlook and emotional state: 52% of all MYP students surveyed experience a positive emotional state “quite a lot” or “all of the time.”• The majority of MYP students have a positive sense of global self-concept, are engaged in self-reflection and feel resilient: 61% of MYP students reported a positive sense of global self-concept “always” or “most of the time”; 75% indicated that they were engaging in self-reflection; just over half of students reported that they felt resilient “often” or “nearly all the time”. • MYP students are satisfied with school: Most MYP students were found to be happy (approximately 70%) and satisfied (approximately 80%) with school. The researchers found that most MYP students reported that they enjoyed school (72%), enjoyed learning (70%), felt supported by their school (71%) and had a sense of fellowship at school (80%).

This study is released just as the Middle Years Programme relaunches in September 2014 following an update that enhances its focus on social and emotional outcomes and its enrichment of a concept-driven curriculum that encourages teaching and learning for understanding.

About the IBFounded in 1968, the International Baccalaureate (IB) is a not-for profit foundation that offers four high quality and challenging education programmes for a worldwide community of schools. For 45 years, IB programmes have gained a reputation for rigour and high academic standards, for preparing students for life in a globalized 21st century, and for helping to develop citizens who will create a better, more peaceful world. Currently, more than one million IB students attend nearly 3,700 schools in 146 countries.