New Sensor to Monitor Blood Sugar Through a Breath 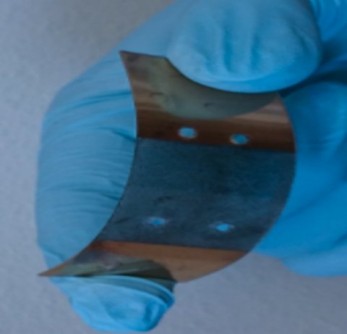 This flexible sensor could hold the key to people with diabetes one day monitoring their blood sugar with a simple puff into a handheld device. The technology is being developed by South Dakota State University researchers through startup company Nano Tek LLC.

Newswise — It’s a breath of fresh air for people with diabetics.

A simple puff into a handheld device may one day be all it takes to monitor their blood sugar using a new technology being developed at South Dakota State University.

The device will not only be painless, but reusable—no finger pricks or expensive test strips, explained doctoral student Khalid Emshadi, who has been working on the business development side of the project since fall 2017. Emshadi did research on drug delivery systems while earning a master’s degree in materials science and biomedical engineering from Washington State University.

The sensor device will work like a breathalyzer, but rather than measuring alcohol, the sensor measures acetone to determine an individual’s blood glucose level, according to Harold C. Hohbach Endowed Professor in Electrical Engineering Qiquan Qiao, who leads the sensor research team.

“Acetone is a biomarker for blood glucose level,” explained doctoral student Md Tawabur Rahman, who has been working on the sensor since fall 2016. An invention disclosure has been submitted to the SDSU Office of Technology Transfer and Commercialization.

Qiao, along with Professor Huitian Lu of the Department of Construction and Operations Management, began developing the sensor in 2015 through a two-year grant from South Dakota Board of Regents Research and Innovation Grant Program and Sanford Health.

To make the biosensor, the researchers used a technique called molecular imprinting to deposit a polymer layer onto graphene. “The 3D polymer has small cavities that are the same shape and size as acetone molecules,” Rahman said. “It works like a filter, allowing only acetone to get through and bind to the graphene.”

“Human exhaled breath contains more than 3,000 volatile organic compounds resulting from the body’s metabolic pathways,” Emshadi explained. “The sensor detects only acetone and ignores the others. The selectivity is very high.”

When the acetone molecules attach to the graphene, it changes the material’s electrical properties. “The amount of resistance in the graphene sensing layer changes based on the amount of acetone gas,” said Rahman.  To test the sensor, he placed it in a chamber into which acetone gas was introduced for three seconds.

The sensor detects acetone levels ranging from 0.9 ppm to 10 ppm. “The acetone concentrations in the breath of a nondiabetic range from 0.3 to 0.9 parts per million; however, in diabetics, those levels are higher,” Rahman explained. Additional electronic components will then convert the measurement to milligrams per deciliter, the standard blood glucometer reading.

Next, Rahman will optimize the sensor’s recovery time—how long the user must wait before taking another reading. “My goal is to make it less than one minute,” he said.

Once preliminary evaluations have been completed, the researchers will integrate the sensor into a prototype device that can be tested using human breath.

In May, Emshadi and Qiao started Nano Tek LLC to develop and market this and other sensor devices that are in the research phase. They are working with business expert Dwaine Chapel, CEO and executive director of the Research Park. Through the South Dakota EDA I6 fund, the researchers secured $20,389 in funding to gather more data on the sensor and help build a prototype.

Emshadi and Qiao also recently received a $50,000 National Science Foundation Innovation Corps grant to help them explore their customer base and build connections with health-care professionals and biomedical manufacturers. The NSF I-Corps™ program provides training for scientists and engineers to extend their research beyond the laboratory.

Emshadi envisions putting the breath sensor into a smartphone along with an app that enables users to effectively monitor and manage their blood glucose levels. “This new technology promises to be revolutionary.”

Though he acknowledges the challenges they face in commercializing the technology, he looks forward to learning more about the business side through the NSF I-Corps™ training, which begins in January.

“If we succeed, it’s going to be ‘wow,’” Emshadi said. “This will make life easier for everyone with diabetes.”