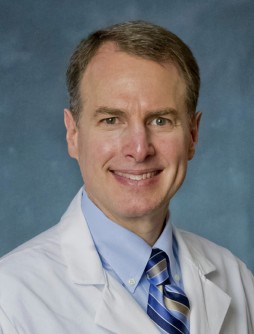 Scott Cotler, MD, Loyola University Health System, is one of a team of hepatitis C researchers published in a groundbreaking study on drug treatment.

Newswise — Hepatitis C virus (HCV) infection affects about 4 million in the United States and is the primary cause of liver cirrhosis and liver cancer. Current therapy against HCV is suboptimal. Daclatasvir, a direct acting antiviral (DAA) agent in development for the treatment of HCV, targets one of the HCV proteins (i.e., NS5A) and causes the fastest viral decline (within 12 hours of treatment) ever seen with anti-HCV drugs. An interdisciplinary effort by mathematical modelers, clinicians and molecular virologists has revealed that daclatasvir has two main modes of action against HCV and also yields a new, more accurate estimate of the HCV half-life.

Results of the NS5A study are published in the prestigious Proceedings of the National Academy of Sciences (PNAS) on February 18th, 2013.

The new study documents HCV kinetic modeling during treatment both in patients and in cell culture that provides insight into the modes of action of daclatasvir. In addition, the study suggests a more accurate estimate of HCV clearance from circulation previously estimated in 1998 by Drs. Dahari, Layden, Perelson and colleagues in Science.

“Our modeling of viral kinetics in treated patients predicts that daclatasvir not only blocks the synthesis of the viral RNA within infected cells but also blocks the secretion of infectious virus from the cells,” explained Dahari. This prediction was confirmed in Dr. Uprichard’s laboratory using cultured liver cells that support the entire life cycle of HCV infection. Drs. Dahari and Uprichard are directors of a new program for experimental and translational modeling recently established at Loyola to promote the type of interdisciplinary research exemplified in this publication. Additional 2013 Dahari Research Papers

Additional research conducted by Dahari and colleagues related to the new Loyola program for experimental and translational modeling in other professional journals includes:

- A study on the effect of ribavirin on HCV kinetics and liver gene expression, led by researchers from the National Institute of Health and published in Gut.

- A letter on understanding triphasic HCV decline during treatment in the era of IL28B polymorphisms and direct acting antiviral agents via mathematical modeling, published in the Journal of Hepatology.

- A study showcasing a mathematical model of the acute and chronic phases of Theiler murine encephalomyelitis virus (TMEV) infection - a highly relevant experimental animal model for multiple sclerosis - that can serve as an important tool in understanding TMEV infectious mechanisms and may prove useful in evaluating antivirals and/or therapeutic modalities to prevent or inhibit demyelination published in the Journal of Virology.

Dr Dahari is a recognized international leader in the field of viral kinetics. “Loyola is honored to have Dr. Dahari as a member of the Hepatology faculty; his ground-breaking research will help reinforce Loyola’s leadership in the treatment of hepatitis C,” said David W. Hecht, MD, MS, MBA, chair, internal medicine in the SSOM and interim senior vice president, Clinical Affairs at LUHS.