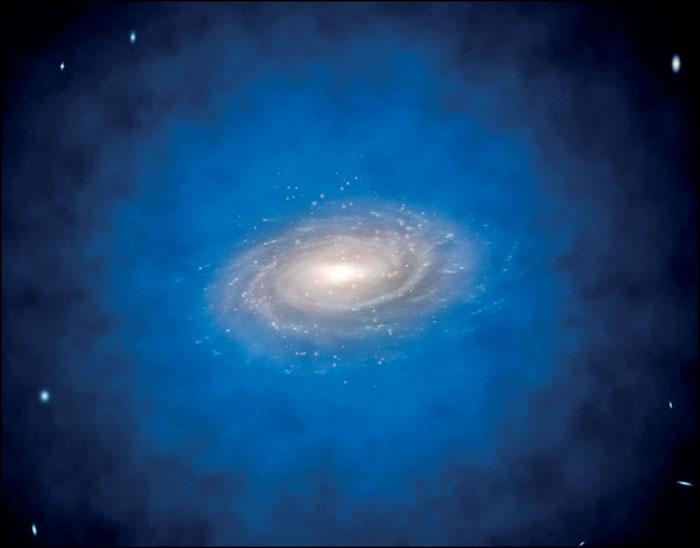 Artist's impression of a spiral galaxy embedded in a larger distribution of invisible dark matter, known as a dark matter halo (coloured in blue). Studies looking at the formation of dark matter haloes have suggested that each halo could harbour a very dense nucleus of dark matter, which may potentially mimic the effects of a central black hole, or eventually collapse to form one.

Newswise — A new theoretical study has proposed a novel mechanism for the creation of supermassive black holes from dark matter. The international team find that rather than the conventional formation scenarios involving 'normal' matter, supermassive black holes could instead form directly from dark matter in high density regions in the centres of galaxies. The result has key implications for cosmology in the early Universe, and is published in Monthly Notices of the Royal Astronomical Society.

Standard formation models involve normal baryonic matter - the atoms and elements that that make up stars, planets, and all visible objects - collapsing under gravity to form black holes, which then grow over time. However the new work investigates the potential existence of stable galactic cores made of dark matter, and surrounded by a diluted dark matter halo, finding that the centres of these structures could become so concentrated that they could also collapse into supermassive black holes once a critical threshold is reached.

According to the model this could have happened much more quickly than other proposed formation mechanisms, and would have allowed supermassive black holes in the early Universe to form before the galaxies they inhabit, contrary to current understanding.

Carlos R. Argüelles, the researcher at Universidad Nacional de La Plata and ICRANet who led the investigation comments: "This new formation scenario may offer a natural explanation for how supermassive black holes formed in the early Universe, without requiring prior star formation or needing to invoke seed black holes with unrealistic accretion rates."

Another intriguing consequence of the new model is that the critical mass for collapse into a black hole might not be reached for smaller dark matter halos, for example those surrounding some dwarf galaxies. The authors suggest that this then might leave smaller dwarf galaxies with a central dark matter nucleus rather than the expected black hole. Such a dark matter core could still mimic the gravitational signatures of a conventional central black hole, whilst the dark matter outer halo could also explain the observed galaxy rotation curves.

"This model shows how dark matter haloes could harbour dense concentrations at their centres, which may play a crucial role in helping to understand the formation of supermassive black holes," added Carlos.

"Here we've proven for the first time that such core-halo dark matter distributions can indeed form in a cosmological framework, and remain stable for the lifetime of the Universe."

The authors hope that further studies will shed more light on supermassive black hole formation in the very earliest days of our Universe, as well as investigating whether the centres of non-active galaxies, including our own Milky Way, may play host to these dense dark matter cores.