Wire goes under the skin, not into the heart 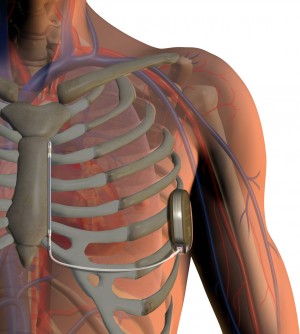 In carefully selected patients, a S-ICD can reduce the risk of bleeding, blood clots and bloodstream infections, compared with a defibrillator with leads that go into the heart, said Peter Santucci, MD, an associate professor in the Division of Cardiology and medical director of the Implant Device Program.

Loyola’s first S-ICD patient is Stacey Tyranski, 36, of Huntley, Ill., who recently went into cardiac arrest at a health club, where she was taking a Zumba fitness class. An off-duty firefighter saved her life by administering CPR and an electric shock from an automated external defibrillator.

Tyranski was taken to a local hospital and then transferred to Loyola, where she was fitted with the new S-ICD.

“It makes me feel safe,” she said.

Tyranski has a congenital heart condition called transposition of the great vessels. The two major vessels that carry blood away from the heart -- the aorta and the pulmonary artery –were switched (transposed). Tyranski had surgery to repair the defect when she was an infant. But the technique used at the time has increased her risk for irregular, life-threatening heartbeats called arrhythmias, said Joel Hardin, MD a specialist in congenital heart disease and an associate professor in Loyola’s Division of Cardiology.

The Food and Drug Administration has approved the S-ICD, and the device is covered by Medicare. “It can protect patients from sudden cardiac death without putting leads into the heart,” Santucci said. In a standard defibrillator device known as a transvenous ICD, a primary lead is guided through a vein in the upper chest and into the right ventricle of the heart. But this was not possible in Tyranski’s case, due to a completely obstructed vein that normally would allow a wire to enter the heart. She thus was a good candidate for a S-ICD.

While the battery of a transvenous ICD is implanted in the upper chest, the battery of a S-ICD is implanted on the side of the chest under the arm pit. An implantable defibrillator is indicated for patients who have survived cardiac arrest or have risk factors for cardiac arrest, including significant cardiomyopathy, structural heart disease, heart failure and certain genetic heart rhythm abnormalities. An implantable defibrillator continually monitors the patient’s heart rhythm. If the heart begins to beat dangerously fast or chaotically, the device restores normal rhythm with an electric shock.

In a significant percentage of patients, the lead of a defibrillator will need to be replaced after 10 or 20 years. Removing a lead from a transvenous ICD carries a small risk of perforating or tearing the heart wall. Removing a lead from a S-ICD carries a lower risk of serious complication, Santucci said. In a transvenous ICD, an infection from the lead going into the heart can be life-threatening. By contrast, if there is an infection from a lead of a subcutaneous ICD, the infection is unlikely to reach the bloodstream, Santucci said.

The S-ICD can be especially beneficial to patients who are at high risk for infections and for younger patients who likely will need to have leads replaced one or more times during their lifetimes.

Loyola is a major regional and national referral center for the treatment of complex heart rhythm disorders. Loyola offers treatment options often unavailable elsewhere. Loyola’s team of electrophysiologists, advanced practice nurses, technical staff, imaging experts and other professionals provide an integrated approach to the diagnosis and treatment of a variety of rhythm disturbances and their associated underlying conditions. Loyola’s heart rhythm specialists are frequently at the forefront of new technology innovations for the treatment of patients.