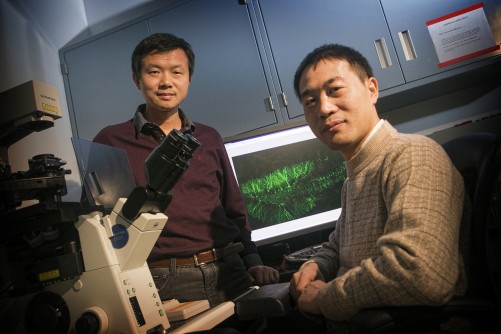 Newswise — STONY BROOK, N.Y., November 10, 2012 – Newly generated, or newborn neurons in the adult hippocampus are critical for memory retrieval, according to a study led by Stony Brook University researchers to be published in the November 11 advanced online edition of Nature Neuroscience. The functional role of newborn neurons in the brain is controversial, but in “Optical controlling reveals time-dependent roles for adult-born dentate granule cells,” the researchers detail that by ‘silencing’ newborn neurons, memory retrieval was impaired. The findings support the idea that the generation of new neurons in the brain may be crucial to normal learning and memory processes.

Previous research by the study’s lead investigator Shaoyu Ge, PhD, Assistant Professor in the Department of Neurobiology & Behavior at Stony Brook University, and others have demonstrated that newborn neurons form connections with existing neurons in the adult brain. To help determine the role of newborn neurons, Dr. Ge and colleagues devised a new optogenetic technique to control newborn neurons and test their function in the hippocampus, one of the regions of the brain that generates new neurons, even in the adult aging brain.

“Significant controversy has surrounded the functional role of newborn neurons in the adult brain,” said Dr. Ge. “We believe that our study results provide strong support to the idea that new neurons are important for contextual fear memory and spatial navigation memory, two essential aspects of memory and learning that are modified by experience.

“Our findings could also shed light on the diagnosis and treatment of conditions common to the adult aging brain, such as dementia and Alzheimer’s disease,” he said.

Dr. Ge explained that their findings may help specifically to advance research on cell-replacement therapies being investigated for neurological diseases of the brain affecting memory.

In the study, Dr. Ge and colleagues used a retroviral tool to deliver optogenes: genes that are engineered to express proteins that form channels responsive to light stimulation. Using their created opto-retrovirus, the research team labeled a cohort of newborn neurons that they could control with light illumination. By doing this, the team conducted an in-depth exploration of the circuit and behavioral functions of newborn neurons in the adult mouse brain.

The researchers first determined when the neurons were “ready” in the hippocampus, which is an important addition to their findings published earlier this year in Nature. Then they ‘silenced’ the activity of neurons of different ages. They found that by silencing four-week-old neurons, an age known to be more responsive to change than existing neurons, but not older or younger neurons, memory retrieval was impaired in tasks known to depend on the functions of the hippocampus.

Regarding the newborn neuron controlling method, Dr. Ge and colleagues said that the novel tool and approach used in the study can be applied to other circuit and behavioral studies to access the functional contributions of newborn neurons in the adult brain.

Co-authors of the study include: Yan Gu, Jia Wang, and Stephen Janoschka of the Department of Neurobiology and Behavior at Stony Brook University School of Medicine; and Maithe Arruda-Carvalho, Sheena Josselyn, and Paul Frankland of the University of Toronto in Canada.