Newswise — James Clark, The George Washington University's Ronald B. Weintraub Professor of Biology, and Xu Xing, of the Chinese Academy of Science's Institute of Vertebrate Paleontology and Paleoanthropology in Beijing, have discovered a unique beaked, plant-eating dinosaur in China. This finding demonstrates that theropod, or bird-footed, dinosaurs were more ecologically diverse in the Jurassic period than previously thought and offers important new evidence about how the three-fingered hand of birds evolved from the hand of dinosaurs. The discovery is featured in this week's edition of the journal Nature.

"This new animal is fascinating in and of itself, and when placed into an evolutionary context it offers intriguing evidence about how the hand of birds evolved," said Dr. Clark. Clark's graduate student, Jonah Choiniere, also was involved in analyzing the new animal.

Dr. Xu, said, "This discovery is truly exciting, as it changes what we thought we knew about the dinosaur hand. It also is amazing to bring conciliation between the data from million-year-old bones and molecules of living birds."

Limusaurus inextricabilis (meaning "mire lizard who could not escape") was found in 159 million-year-old deposits located in the Junggar Basin of Xinjiang, northwestern China. The dinosaur earned its name from the way its skeletons were preserved, stacked on top of each other in fossilized mire pits that were the subject of a 2008 National Geographic film, "Dino Death Trap." A close examination of the fossil shows that its upper and lower jaws were toothless, demonstrating that the dinosaur possessed a fully developed beak. Its lack of teeth, short arms without sharp claws and possession of gizzard stones suggest that it was a plant-eater, though it is related to carnivorous dinosaurs.

The newly discovered dinosaur's hand is unusual and provides surprising new insights into a long-standing controversy over which fingers are present in living birds, which are theropod dinosaur descendants. The hands of theropod dinosaurs suggest that the outer two fingers were lost during the course of evolution and the inner three remained. Conversely, embryos of living birds suggest that birds have lost one finger from the outside and one from the inside of the hand. Unlike all other theropods, the hand of Limusaurus strongly reduced the first finger and increased the size of the second. Drs. Clark and Xu and their co-authors argue that Limusaurus' hand represents a transitional condition in which the inner finger was lost and the other fingers took on the shape of the fingers next to them. The three fingers of most advanced theropods are the second, third and fourth fingers—the same ones indicated by bird embryos—contrary to the traditional interpretation that they were the first, second and third.

Limusaurus is the first ceratosaur known from East Asia and one of the most primitive members of the group. Ceratosaurs are a diverse group of theropods that often bear crests or horns on their heads, and many have unusual, knobby fingers lacking sharp claws.

The fossil beds in China that produced Limusaurus have previously yielded skeletons of a variety of dinosaurs and contemporary animals described by Drs. Clark and Xu and their colleagues. These include the oldest tyrannosaur, Guanlong wucaii; the oldest horned dinosaur, Yinlong downsi; a new stegosaur, Jiangjunosaurus junggarensis; and the running crocodile relative, Junggarsuchus sloani.

Dr. Clark has spent the last 18 years searching the Gobi Desert for dinosaurs. In 1991, he helped organize the first American expedition to Mongolia with the American Museum of National History. For the past seven years, his field work with Dr. Xu has focused on dinosaurs from the middle of the Jurassic Period, in the far western reaches of the Gobi.

The article, "A Jurassic ceratosaur from China and its significance for theropod digit reduction and avian digital homologies" appears in the June 18 edition of Nature. Nature is a weekly international journal publishing peer-reviewed research in all fields of science and technology on the basis of its originality, importance, interdisciplinary interest, timeliness, accessibility, elegance and surprising conclusions.

Located four blocks from the White House, The George Washington University was created by an Act of Congress in 1821. Today, GW is the largest institution of higher education in the nation's capital. The university offers comprehensive programs of undergraduate and graduate liberal arts study, as well as degree programs in medicine, public health, law, engineering, education, business, and international affairs. Each year, GW enrolls a diverse population of undergraduate, graduate, and professional students from all 50 states, the District of Columbia, and more than 130 countries.

For more news about The George Washington University, visit www.gwnewscenter.org. 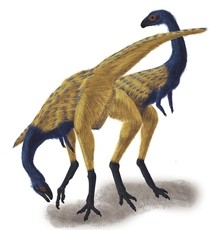