Newly Discovered Exoplanet Will be Swallowed by Own Star 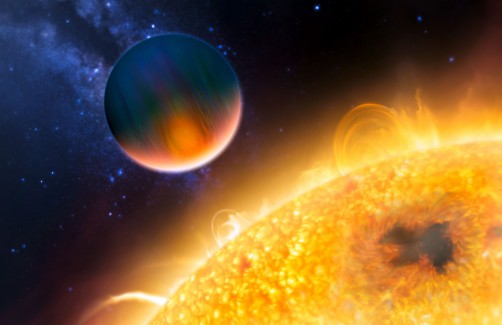 Newswise — RIVERSIDE, Calif. (www.ucr.edu) — Astronomers don’t know much about the history of a newly discovered exoplanet called HD 76920b, but they can predict its rather grim future: it will be dragged toward, and eventually devoured, by its host star.

The discovery of HD 76920b and its anticipated fate are described in a forthcoming article in The Astronomical Journal. The international team of researchers, including UC Riverside’s Stephen Kane, is studying distant planetary systems to learn more about what constitutes a ‘typical’ solar system and to seek signs of life in other parts of the universe. Robert A. Wittenmyer, an associate professor of astrophysics at the University of Southern Queensland in Australia, is the paper’s lead author.

Before astronomers had the ability to look beyond our own solar system, they expected other planetary systems to look similar to our own. Since the first exoplanet was discovered in 1995, their assumptions have been shattered, and a highly diverse array of planetary systems has been described. While our solar system comprises the sun and eight planets with almost circular orbits, many stars host a single planet that is far larger or fluffier than anything close to home. Exoplanets often have eccentric orbits, traveling around their stars on an elliptical pathway more akin to the comets in our solar system than planets.

To date, scientists have detected more than 3,000 exoplanets — likely only a small portion of what is yet to be discovered. The “wobble” detection method, which allows astronomers to pinpoint planets based on the gravitational tug they exert on their stars, has greatly aided that process.

Located 587 light years away, HD 76920b takes about 415 days to travel around its star — a period similar to a year on Earth, but that’s where the similarities end. HD 76920b is the size of Jupiter and four times as heavy. The exoplanet is also the only planet in its solar system and boasts the most elliptical orbit of any planet found around a giant star.

Superimposing HD76920b’s orbit on the Solar system shows how peculiar it is. Its orbit is more like that of the asteroid Phaethon than any of the Solar system’s planets. Jake Clark

At one point during its orbit, HD 76920b passes extremely close — within four stellar radii — of its giant star. This means it will eventually be engulfed by its host star, an event the researchers predict will happen within the relatively short astronomical period of 100 million years.

“As the star continues to swell, and because of strong tidal forces, HD 76920b is losing energy and will eventually spiral toward its star, where it will be engulfed and destroyed,” said Kane, an associate professor of astronomy and planetary astrophysics in UCR’s College of Natural and Agricultural Sciences. “This planet is about as different as you can get from Earth, and it shows the dramatic diversity between the exoplanets we are discovering now and the planets in our own solar system.”

The team will now monitor HD 76920b to learn more about its properties while continuing to search for other planets.

“Learning more about the complexities of other planetary systems, such as how they form and evolve, will ultimately advance our quest to find life beyond Earth,” Kane said.