Next Wave of Research: Ecology, Super-Sized 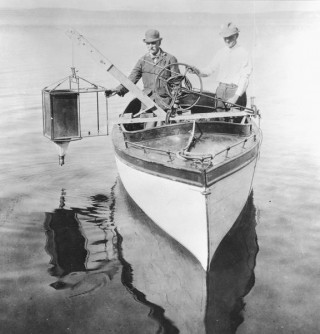 Pioneering University of Wisconsin lake ecologists Edward A. Birge (left) and Chancey Juday with a plankton trap in Lake Mendota, Madison, Wisconsin, in 1917. UW-Madison scientists are now engaged in much larger ecological collaborations with researchers from around the nation and world. 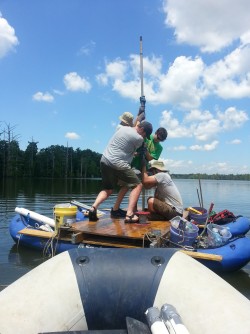 Students and scientists under the leadership of Jack Williams drive a pollen sampling core into the sediment of Horseshoe Lake, Illinois in 2013. Pollen sampling can determine the species mix of a vanished forest, contributing to an ecological history of the Midwest.

Newswise — MADISON, Wis. — The University of Wisconsin-Madison, home of pioneering ecologists who studied lakes, forests, wetlands and prairies, is playing a key role in the next wave of ecological research: large teams of scientists confronting the dilemma of a changing climate on a shrinking planet.

But where UW-Madison's Edward Birge and Chancey Juday, considered the founders of freshwater science, once studied lakes one by one, UW-Madison scientists are now leading several large-scale ecological investigations.

The university, through its Trout Lake Station in Boulder Junction, Wisconsin, has played a pivotal role in the Global Lake Ecological Observatory Network (GLEON), an international network that has placed observation buoys at more than 100 lakes. The 24/7 nature of data collection is essential, says Tim Kratz, director of Trout Lake and a GLEON founder. "One difficulty in studying lakes is that many organisms are very short-lived, and the environment can change quickly."

Kratz says that when sensors that could ride a buoy and continuously send data to publicly accessible databases became available, "I thought, 'Why should everybody have to go through the same learning curve?'"

GLEON is a grassroots network of scientists and volunteers from 46 countries who gather data for their own purposes. Their records are being assembled to compare lakes of various sizes, located in different geographic or social settings and climates, Kratz says. For example, the project has discovered the release of greenhouse gases is controlled differently in large lakes versus small ones.

On land, PalEON (the Paleo-Ecological Observatory Network) is looking backward to see forward, assembling long-term records from lake sediments and other natural archives to build large-scale reconstructions of forest and climate history that support better predictions of future changes in climate and land cover. Forests can either supply carbon to the atmosphere or remove it, says UW-Madison geography Professor Jack Williams, director of the Nelson Center for Climatic Research.

"Some ecosystem models predict that forests will store more carbon over this century, but others say they will release more. The question matters because forests store such a vast amount of carbon and because carbon dioxide is the major greenhouse gas and therefore a major regulator of earth’s temperature. We just don’t know: Will forests multiply or mitigate climate change?"

The Wisconsin scientists are well versed in the multiple methods used to document past forests and climates, including isotopes inside decaying plant material, pollen and charcoal trapped in lake sediments, historic land surveys and tree rings. All reveal the change of conditions through time, and are helping track the poorly known history of the great forest that stretched from Minnesota to New York and New England.

PalEON is an 11-institution network headed by the University of Notre Dame, in which UW-Madison plays a leading role, Williams says. "With our traditional strengths in field and laboratory ecology and in building large-scale data syntheses, we can carry a heavy burden in the effort to map the changes in North American forests over the last thousand years, up through the present."

Williams, who heads Madison's participation in PalEON, says his group is filling in the blanks by assembling data from public land surveys, which show forest composition at the time of settlement, and pollen that sank to the bottom of lakes, which tracks the changing abundances of plants and trees around the lake.

"We're pollen whisperers," says Simon Goring, a postdoctoral fellow in geography, who notes that pollen records can extend back tens of thousands of years and can provide snapshots of forest composition from one decade to the next.

PalEON is getting information about the early 1800s by reanalyzing records that show forest density and composition, taken by federal surveyors who mapped Wisconsin and other parts of the Northwest Territories. Much of the Wisconsin data has been assembled by David Mladenoff in the Department of Forest and Wildlife Ecology, says Williams. "We are building on 20 years of David's work for Wisconsin, and adding that to studies from Minnesota and Michigan, to stitch together a wholesale map of changing land cover that will stretch to the Atlantic.

“It's kind of amazing; we take records gathered by people using sextants and chains, and feed it into databases that tell us about the landscape before Europeans made drastic changes to it."

"The pre-European settlement forest was much more mature with hickory, walnut, oak and beech," says Goring, compared to modern upper Midwestern forests, which look like young forests that follow fire or other disturbance, with more poplar and white birch.

The ultimate goal is to flesh out a deeper history of the effects of climate variability on forests, which are essential for the ecosystem models that explore the feedbacks between forest ecosystems and climate change, Williams says. "Having this rich history will help us run the various models and check them against our long-term data, and improve the models as necessary. This has long been done very successfully with weather forecasting and climate models, and it's now being done with terrestrial ecosystem models."

The new emphasis on large-scale ecosystem research "is the next logical step for a university with a long history of studying changes in climate due to human activity and other causes," says Williams. "Reid Bryson was one of the first to look seriously at climate change, and John Kutzbach produced a groundbreaking set of studies identifying the key causes of past climate change. Thompson Webb, my advisor at Brown, got his Ph.D. here in Madison in 1971 and has been studying paleoclimate ever since."

Ecological history — on both land and water — is no longer the province of the lone wolf, no matter how talented and dedicated, Williams says. "I really see it as 'ecology grows up, and grows out.' We are looking at bigger questions, a longer time scale, at wider horizons, and that requires bigger teams and more interdisciplinary work."### 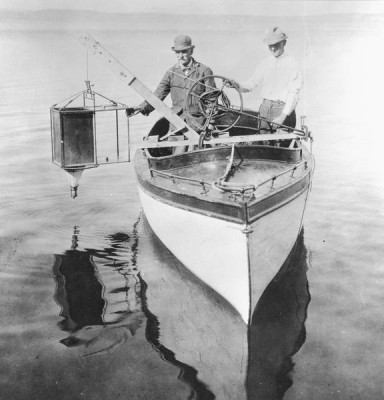 Caption: Pioneering University of Wisconsin lake ecologists Edward A. Birge (left) and Chancey Juday with a plankton trap in Lake Mendota, Madison, Wisconsin, in 1917. UW-Madison scientists are now engaged in much larger ecological collaborations with researchers from around the nation and world. 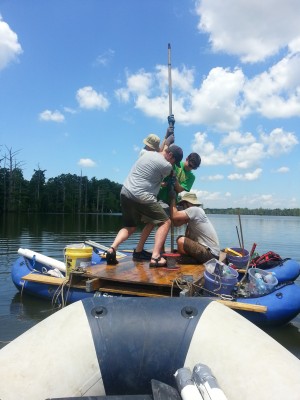 Caption: Students and scientists under the leadership of Jack Williams drive a pollen sampling core into the sediment of Horseshoe Lake, Illinois in 2013. Pollen sampling can determine the species mix of a vanished forest, contributing to an ecological history of the Midwest.