Collaborative Center Led by Albert Einstein College of Medicine, The Rockefeller University and the City University of New York 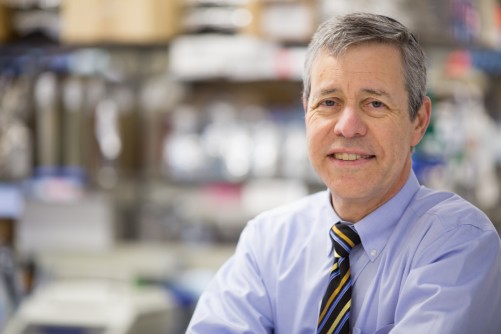 Directed by Harris Goldstein, M.D., professor of pediatrics and of microbiology & immunology at Einstein, the Einstein-Rockefeller-CUNY Center for AIDS Research (ERC-CFAR) brings together a powerful team of more than 150 investigators from the three institutions.

"The new CFAR builds on Einstein and Montefiore’s longstanding achievements in HIV and AIDS research and our shared commitment to social justice,” says Dr. Allen M. Spiegel, the Marilyn and Stanley M. Katz Dean at Einstein and executive vice president and chief academic officer at Montefiore Medicine. “Expanding our work to include peer institutions that span the city and research spectrum will aid our efforts to translate findings into better prevention, therapies, beneficial population health outcomes and, hopefully, a cure.”

“We are committed to focusing research efforts on the goal of stopping the AIDS epidemic—particularly in the economically and socially challenged populations at the highest risk for infection—by preventing new infections, advancing treatment, and developing a scalable cure,” says Dr. Goldstein, who also holds the Charles Michael Chair in Autoimmune Diseases at Einstein and is principal investigator of the grant. “Our partnership enables us to combine and synergize the ample basic science, clinical research, and population health expertise within our three institutions, along with our extensive access to patients and strong public health experience to achieve this goal.”

Comprehensive Research Agenda
The Einstein-Rockefeller-CUNY Center for AIDS Research, he adds, is driving a “bench-to-bedside-to-community and back-to-the-bench” research agenda, with resources devoted to behavioral science, clinical translation of research findings into novel treatments, the discovery of biomarkers, applying advanced technologies for improving clinical outcomes and developing an HIV vaccine. Experts in implementation science will determine and apply the most effective ways to provide patient care, therapies, testing, and pre-exposure prophylaxis (PrEP) and post-exposure prophylaxis (PEP) medications to prevent HIV acquisition.

“This is a wonderful opportunity that is bringing key groups together to innovate new approaches to treat and control HIV spread in our community,” says Charles Rice, Ph.D., an ERC-CFAR associate director and the Maurice R. and Corinne P. Greenberg Professor in Virology and head of Rockefeller’s Laboratory of Virology and Infectious Disease.

The new center is one of 19 CFARs nationwide that are funded as part of an NIH-coordinated initiative to support multidisciplinary research aimed at reducing the burden of HIV in the United States and abroad. A major focus of the ERC-CFAR's mission is to translate research into sustainable implementation of population level interventions and strategies that have the potential to improve HIV-related outcomes and reduce health disparities on a large scale.

"We have made tremendous progress in mitigating the impact of HIV, and we are taking active steps towards ending the HIV epidemic in New York,” says Denis Nash, Ph.D., M.P.H., the Executive Director of CUNY's Institute for Implementation Science in Population Health, and an associate director of the ERC-CFAR. “However, in New York and around the country, major socioeconomic and racial/ethnic disparities exist in HIV incidence and death. Many of the solutions to ending the HIV epidemic and the inequities that come with it lie in the design of strategies used to package, routinely deliver, and scale evidence-based interventions within systems,” continues Dr. Nash. “This is why the ERC-CFAR emphasizes and supports the use of implementation science approaches to advance our research agenda and achieve better population health outcomes."

The leadership team of the center includes two additional associate directors: Sarah Schlesinger, M.D., of Rockefeller, who is an expert on designing and implementing immune-based clinical trials to prevent HIV-1 infection and Betsy Herold, M.D., of Einstein, who is a leader in developing safe and effective topical microbicides for preventing HIV, genital herpes and other sexually transmitted infections.

HIV in NYC
New York City is considered “an HIV epicenter,” says Dr. Goldstein. More than 114,000 New Yorkers are living with HIV/AIDS and HIV is the third leading cause of death for NYC residents ages 35 to 54. In 2015, there were 2,493 new HIV diagnoses and 1,307 new AIDS diagnoses in New York City, according to the annual 2015 HIV/AIDS Surveillance Report from the New York City Department of Health and Mental Hygiene.

“The NYC location of our center serves both as a stimulant to reduce the anguish of HIV/AIDS in our hometown, and as a strategic research site for our collaborative mission to develop new advances in HIV treatment, prevention and cures,” adds Dr. Goldstein.

On June 19, the new center will host an inaugural symposium at Einstein featuring Dr. Anthony Fauci, Director of the NIH National Institute of Allergy and Infectious Diseases (NIAID), Dr. Mary Bassett, Commissioner of the New York City Department of Health and Mental Hygiene and Dr. Michel Nussenzweig, professor and head of the Laboratory of Molecular Immunology at The Rockefeller University.

About Albert Einstein College of Medicine
Albert Einstein College of Medicine is one of the nation’s premier centers for research, medical education and clinical investigation. During the 2016-2017 academic year, Einstein is home to 717 M.D. students, 166 Ph.D. students, 103 students in the combined M.D./Ph.D. program, and 278 postdoctoral research fellows. The College of Medicine has more than 1,900 full-time faculty members located on the main campus and at its clinical affiliates. In 2016, Einstein received more than $160 million in awards from the National Institutes of Health (NIH). This includes the funding of major research centers at Einstein in aging, intellectual development disorders, diabetes, cancer, clinical and translational research, liver disease, and AIDS. Other areas where the College of Medicine is concentrating its efforts include developmental brain research, neuroscience, cardiac disease, and initiatives to reduce and eliminate ethnic and racial health disparities. Its partnership with Montefiore, the University Hospital and academic medical center for Einstein, advances clinical and translational research to accelerate the pace at which new discoveries become the treatments and therapies that benefit patients. Einstein runs one of the largest residency and fellowship training programs in the medical and dental professions in the United States through Montefiore and an affiliation network involving hospitals and medical centers in the Bronx, Brooklyn and on Long Island. For more information, please visit www.einstein.yu.edu, read our blog, follow us on Twitter, like us on Facebook, and view us on YouTube.

About The Rockefeller University
The Rockefeller University is the world's leading biomedical research university and is dedicated to conducting innovative, high-quality research to improve the understanding of life for the benefit of humanity. Our 82 laboratories conduct research in neuroscience, immunology, biochemistry, genomics, and many other areas, and a community of 1,800 faculty, students, postdocs, technicians, clinicians, and administrative personnel work on our 14-acre Manhattan campus. Our unique approach to science has led to some of the world's most revolutionary and transformative contributions to biology and medicine. During Rockefeller's 115-year history, 24 of our scientists have won Nobel Prizes, 22 have won Albert Lasker Medical Research Awards, and 20 have garnered the National Medal of Science, the highest science award given by the United States.