Bequest from Harry and Barbara Markowitz will also include Nobel medallion 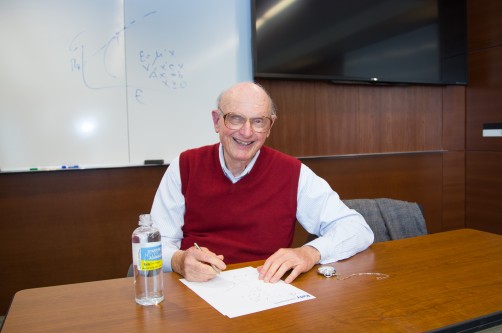 Harry M. Markowitz with his watch. 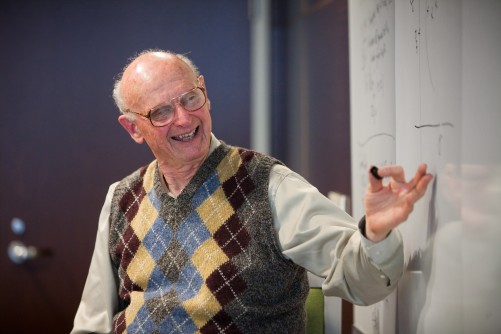 Harry M. Markowitz teaching at the Rady School of Management

Newswise — Nobel laureate Harry Markowitz, an adjunct professor at the Rady School of Management at the University of California San Diego since the early days of the business school, will establish the Barbara and Harry Markowitz Endowed Fellowship to support students at the Rady School of Management through the Markowitz Fellows Program. The fellowship program is designed to attract and support the most outstanding students in the area of the decision sciences, including mathematics, finance and operations research.

“In the past five decades, UC San Diego has been privileged to have 16 Nobel laureates, including Harry Markowitz, teach our students,” said UC San Diego Chancellor Pradeep K. Khosla. “Now we thank this outstanding professor and his wife for committing to generously endow approximately $4 million as a legacy gift to ensure support of Rady School students for generations to come.”

In addition, Markowitz will donate to the Rady School his prestigious medals, including the Sveriges Riksbank Prize in Economic Sciences in Memory of Alfred Nobel (Nobel Prize) awarded to Markowitz in 1990; the Wharton-Jacobs Levy Prize awarded in 2013; and the John von Neumann Theory Prize awarded in 1989. In an especially touching gift, Markowitz will donate his Hamilton “Traffic Special” pocket watch, purchased in 1950, which he has used to track time during his illustrious career. All Markowitz’ gifts contribute to the Campaign for UC San Diego.

“We are indeed fortunate to not only have one of the world’s most renowned financial economists on our faculty, but also to be able to call Harry Markowitz a friend,” said Rady School of Management Dean Robert S. Sullivan. “His continued quest for knowledge and impact is an inspiration to all.”

The nearly 90-year-old Markowitz continues to teach portfolio theory at the Rady School, conduct research, consult with clients and is writing the third volume in a series of four textbooks, which is titled Risk-Return Analysis: The Theory and Practice of Rational Investing.The school’s Dr. Harry M. Markowitz Endowed Chair in Finance and Investing, established in 2016, was named in honor of the Nobel laureate.

“I was trained at the University of Chicago; I taught full-time, part-time and lectured all over the world; but the Rady School and UC San Diego are my home,” said Markowitz. “I am delighted that my legacy will live on at the Rady School.”

Harry Markowitz was born on Aug. 24, 1927 in Chicago, as the child of Morris and Mildred Markowitz. During high school, he picked up an interest in physics and philosophy, in particular the ideas of David Hume, an interest he continued to follow during his undergraduate years at the University of Chicago. After receiving his B.A., Markowitz decided to continue his studies at the University of Chicago, choosing to specialize in economics. Here, he had the opportunity to study under important economists including Milton Friedman, Tjalling Koopmans, Jacob Marschak and Leonard Savage. While still a student, he was invited to become a member of the Cowles Commission.

Markowitz chose to apply mathematics to the analysis of the stock market as the topic for his dissertation. Jacob Marschak, who was the thesis advisor, encouraged him to pursue the topic, noting that it had also been a favorite interest of Alfred Cowles, the founder of the Cowles Commission. While researching the then current understanding of stock prices, which at the time consisted in the present value model of John Burr Williams, Markowitz realized that the theory lacks an analysis of the impact of risk. This insight lead to the development of his seminal theory of portfolio allocation under uncertainty, published in 1952 by the Journal of Finance.

In 1951, Markowitz went to work for the RAND Corporation, which George Dantzig, who known as the father of linear programming and the inventor of the simplex method, joined in 1952. At the time Markowitz was developing the critical line algorithm for the identifications of optimal mean-variance portfolios, to generate what was later named the Markowitz frontier. Markowitz credits Dantzig for greatly enhancing his understanding of optimization techniques. In 1955, Markowitz received a doctorate from the University of Chicago with a thesis on the portfolio theory. The topic was so novel that while Markowitz was defending his dissertation, Milton Friedman jokingly argued that portfolio theory was not economics. During 1955-1956 Markowitz spent a year at the Cowles Foundation, which had moved to Yale University, at the invitation of James Tobin. He published the critical line algorithm in a 1956 paper and used the time at the foundation to write a book on portfolio allocation, which was published in 1959.Markowitz won the Nobel Prize in Economics in 1990, while a professor of finance at Baruch College of the City University of New York.

Since its founding more than a decade ago, the UC San Diego Rady School of Management has distinguished itself as a pioneer in a new model of business education. The school’s concentration in innovation, entrepreneurship and collaboration has led to rapid success—borne out by outstanding achievements of its students, faculty and alumni. To date, there are over 130 Rady School-related startups, generating an estimated $150 million in revenue per year with total employment of over 1,025 people.

For more information about a philanthropic investment to the Rady School of Management, visit rady.ucsd.edu/invest.