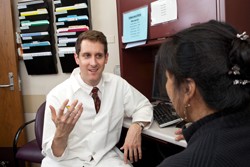 Newswise — ANN ARBOR, Mich. — Subtle and unspoken clues exchanged by patients and doctors exert an influence on medical care, according to a new study by the University of Michigan Health System. Researchers analyzed video recordings of routine checkups and conducted follow-up interviews with participants to help elucidate signals sent and received on both sides of the examination table.

The method shows promise for improving medical decision making by allowing doctors to better understand how they make judgments and what messages they may be unwittingly conveying to patients, the researchers explain.

The study found that patients relied on non-verbal clues to evaluate the doctor-patient relationship, focusing on whether the doctor seemed hurried or put them at ease. Doctors, on the other hand, reported that patients’ tacit clues influenced their medical judgments. The results were published Sept. 26 in the Journal of Evaluation in Clinical Practice.

“Our findings show that both doctors and patients identified tacit clues involving the behavior or appearance of the other, but they were not always able to articulate precisely how these clues informed their judgments and assessments,” says lead author Stephen G. Henry, M.D., a research fellow at the Veterans Affairs Ann Arbor Healthcare System and Department of Internal Medicine at the University of Michigan. “Not surprisingly, patients and doctors discussed these clues very differently.”

The study is exploratory and did not examine whether the clues led to better or worse judgments.

Tacit clues might include non-verbal behaviors such as body language, eye contact, physical appearance, and tone of voice. Other factors, such as how frequently the patient was seen in the clinic, might also inform judgments.

One important study finding was that some doctors appeared to be far more conscious than others of the non-verbal messages they send to patients, says Henry. Just five of the 18 southeast Michigan doctors who participated in the study contributed 64 percent of all the comments, which were given while reviewing a recording of the interaction.

One doctor was particularly attuned to how non-verbal communication spoke to patients, the authors note. “I use my body a lot,” the doctor reported. “It’s nice to see that I don’t look rushed in the room. Although in my mind, I’m whirling. OK, so I sit down, I try to relax and look relaxed.”

Doctors also reported using these tacit clues to aid in diagnosing a patient, says Henry, a researcher in the Robert Wood Johnson Foundation Clinical Scholars program. They discussed observing the patient in a general way for signs that they might be depressed or that they were not revealing the whole of their concerns. “It’s mostly looking at the patient. Do they look healthy?” one doctor said.

Another doctor noted this ability to put together the puzzle pieces of a patient’s verbal and non-verbal communication becomes intuitive: “How do you know what Aunt Martha looks like? Because you know what she looks like, you’ve seen her lots of times. I can’t detail as to why I know that, but I’ve been down the road long enough to know…”

The way a patient comports himself may give a doctor clues as to whether non-specific symptoms like weight gain, fatigue and high blood pressure are signals of depression or whether something else may be responsible, like a rare condition such as Cushing syndrome, which may indicate an adrenal tumor, the authors note.

Patients, on the other hand, were mainly concerned with clues that indicated their place within the doctor-patient relationship – Did the doctor make them feel comfortable? Did the doctor seem like she was in a hurry? Did she put them at ease? Was the doctor a good listener? Did he make eye contact?

While doctors and patients keyed in on particular examples in many of the examinations, sometimes they were unsure of precisely how they arrived at an opinion.

“Our findings are consistent with research from the social sciences suggesting that doctors’ and patients’ judgments in the examining room are often complicated and take into account many subtle, unspoken clues,” says senior author Michael Fetters, M.D., M.P.H., M.A., associate professor of family medicine at the U-M Medical School. “In the future, we hope this method of recording and reviewing these types of interactions can inform interventions designed to improve medical decision making and doctor-patient interaction by providing a more complete understanding of the kind of signals upon which doctors and patients rely.”

Methodology: The study used video elicitation, a method in which participants are interviewed about an event while watching and reflecting on a video-recording of that event. Doctors and patients were interviewed separately.

Data were collected from 72 video elicitation interviews involving 18 doctors and 36 patients (two per doctor). Doctor participants were recruited from six different practices across southeast Michigan. Subjects agreed to be recorded ahead of time and the video camera was placed in an unobtrusive area of the examination room.

Funding: The research was supported by the U.S. Department of Veterans Affairs and the Robert Wood Johnson Foundation.

Citation: “‘How do you know what Aunt Martha looks like?’ A video elicitation study exploring tacit clues in doctor–patient interactions,” Journal of Evaluation in Clinical Practice, Sept 26.