2-Jan-2014 5:00 AM EST, by National University of Singapore
favorite_border 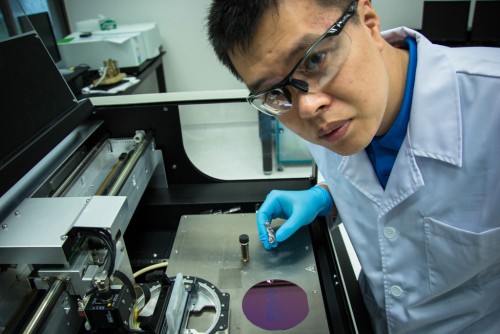 Dr Zheng Jian, the first author of the paper, demonstrating the printing of molybdenum disulfide flakes from a solution of the exfoliated flakes. 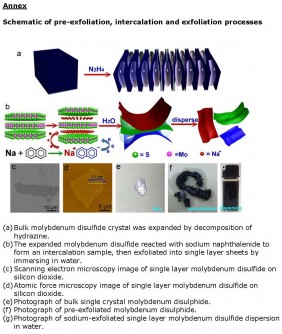 Newswise — Singapore, 2 January 2014 – A team of scientists from the National University of Singapore (NUS) has successfully developed a method to chemically exfoliate molybdenum disulfide crystals, a class of chalcogenide compounds, into high quality monolayer flakes, with higher yield and larger flake size than current methods. The exfoliated flakes can be made into a printable solution, which can be applied in printable photonics and electronics.

This breakthrough, led by Professor Loh Kian Ping, who heads the Department of Chemistry at the NUS Faculty of Science, and is also a Principal Investigator with the Graphene Research Centre at the Faculty, has generic applicability to other two-dimensional chalcogenides, such as tungsten diselenide and titanium disulfide, and results in high yield exfoliation for all of these two-dimensional materials.

The NUS team collaborated with scientists from the Ulsan National Institute of Science and Technology in Korea, and the findings were first published online in prestigious scientific journal Nature Communications on 2 January 2014. Transition metal dichalcogenides, formed by a combination of chalcogens, such as sulphur or selenium, and transition metals, such as molybdenum or tungsten, have recently attracted great attention as the next generation of two-dimensional materials due to their unique electronic and optical properties, for applications in optoelectronic devices such as thin film solars, photodetectors flexible logic circuits and sensors.

However, current processes of producing printable single layer chalcogenides take a long time and the yield is poor. The flakes produced are of submicron sizes, which make it challenging to isolate a single sheet for making electronic devices.

To address the production bottleneck, the NUS team explored the metal adducts of naphthalene. They prepared naphthalenide adducts of lithium, sodium and potassium, and compared the exfoliation efficiency and quality of molybdenum disulfide generated. The processing steps are detailed in the Annex.

The researchers also demonstrated that the exfoliated molybdenum disulfide flakes can be made into a printable solution, and wafer-size films can be printed, as the good dispersion and high viscosity of the flakes render it highly suitable for inkjet printing.

In a comparative analysis, Dr Zheng Jian, the first author of the paper, who is also a Research Fellow with the Department of Chemistry at NUS Faculty of Science, found that the alkali metal naphthalenide intercalation method applied possesses significant advantages in comparison to the conventional method.

Commenting on the significance of the findings, Prof Loh said, “At present, there is a bottleneck in the development of solution-processed two dimensional chalcogenides. Our team has developed an alternative exfoliating agent using the organic salts of naphthalene and this new method is more efficient than previous solution-based methods. It can also be applied to other classes of two-dimensional chalcogenides.”

“Considering the versatility of this method, it may be adopted as the new benchmark in exfoliation chemistry of two-dimensional chalcogenides,” he added.

To further their research and to cater to the industry, Prof Loh and his team will be looking at developing inks based on different types of two-dimensional chalcogenides exfoliated by their novel method so as to produce printable optoelectronic devices. They will also be testing the optical non-linear properties of the flakes they have produced. 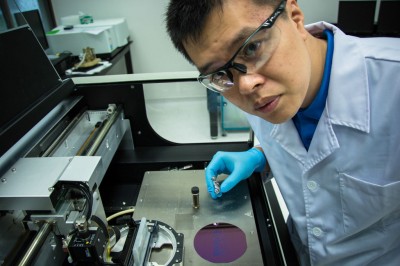 Caption: Dr Zheng Jian, the first author of the paper, demonstrating the printing of molybdenum disulfide flakes from a solution of the exfoliated flakes. 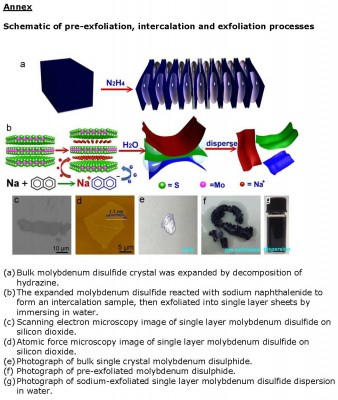