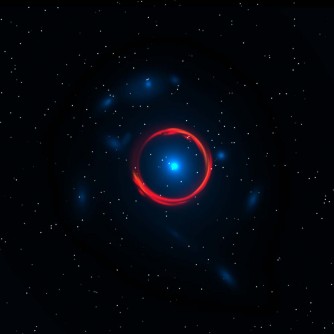 Artist’s impression of one of the South Pole Telescope-discovered sources based on observation by the Altacama Large Millimeter Array and Hubble Space Telescope (HST). The massive central galaxy (in blue, seen by HST) bends the light of a more distant, submillimeter-bright galaxy, forming a ring-like image of the background galaxy that is observed by ALMA (red). 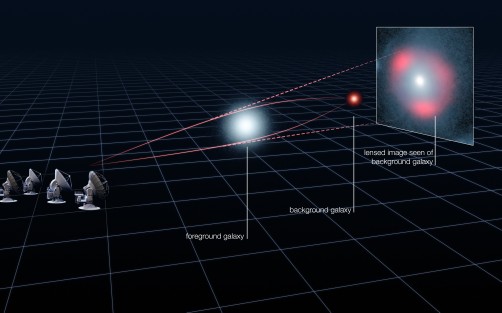 Light rays from a distant galaxy are deflected due to the gravity of a massive, foreground galaxy, as predicted by Einstein’s theory of general relativity. This makes the background galaxy appear as multiple magnified images surrounding the foreground galaxy. 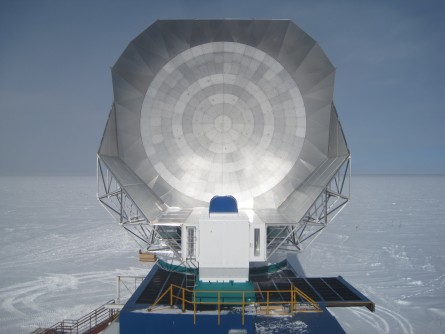 This photo of the 10-meter South Pole Telescope was taken in January 2013, soon after its new extended shielding was complete. The discovery of the luminous star-forming galaxies from the early universe were found in the large millimeter-wave survey recently completed with the SPT.

Newswise — When a batch of bright cosmic objects first appeared in maps in 2008 made with data from the South Pole Telescope, astronomers at the University of Chicago’s Kavli Institute for Cosmological Physics regarded it only as an unavoidable nuisance.

The light sources interfered with efforts to measure more precisely the cosmic microwave background—the afterglow of the big bang. But the astronomers soon realized that they had made a rare find in South Pole Telescope’s large survey of the sky. The spectra of some of the bright objects, which is the rainbow of light they emit, were inconsistent with what astronomers expected from the well-known population of radio galaxies.

Instead they looked like dust-enshrouded, star-forming galaxies. Such galaxies should be easily identified in infrared sky surveys, but there were no known counterparts for what the South Pole Telescope had found. They had to be extremely distant to avoid infrared detection, and therefore extremely luminous. Intrigued, the astronomers performed detailed follow-up imaging of the sources with the new Atacama Large Millimeter Array (ALMA) in Chile’s Atacama Desert. These observations show the dust-filled galaxies were bursting with stars much earlier in cosmic history than previously thought.

Joaquin Vieira, now a postdoctoral scholar at the California Institute of Technology, leads a team that will report the discovery in the March 14 issue of the journal Nature and in two other papers that will appear in the Astrophysical Journal.

“We have been eagerly waiting for ALMA to be ready so we could conduct these observations,” said Vieira, MS’05, PhD’09, who based his doctoral research at UChicago on the discovery of the extragalactic sources. “The sources we discovered with [the South Pole Telescope] were so far in the southern sky that no telescopes in the Northern Hemisphere could observe them. We are very privileged to be among the first astronomers to use ALMA.”

Vieira has supported the South Pole Telescope from the beginning, helping to build the telescope and its camera, said John Carlstrom, S. Chandrasekhar Distinguished Service Professor in Astronomy & Astrophysics at UChicago. “He’s been involved from the ground up, or the ice up, if you will,” said Carlstrom, who leads the SPT collaboration and is a co-author of the Nature paper.

The starburst galaxies produce stars at a prodigious rate, creating the equivalent of a thousand new suns annually. Vieira and his colleagues have found starbursts that were churning out stars when the universe was just a billion years old. Previously astronomers were unsure whether galaxies could form new stars so quickly at this very early point in the history of the universe.

Shining with the energy of a trillion suns or more, these newly discovered galaxies are observed as they were nearly 12 billion years ago, showing us a representative baby picture of the most massive galaxies in Earth’s cosmic neighborhood today. “The more distant the galaxy, the further back in time one is looking, so by measuring their distances, we can piece together a timeline of how vigorously the universe was making new stars at different stages of its 13.7-billion-year history,” Vieira said.

The astronomers found dozens of these galaxies with the South Pole Telescope, a 10-meter dish in Antarctica that surveys the sky in millimeter-wavelength light (situated between radio and the infrared on the electromagnetic spectrum). The team then took a more detailed look using ALMA in Chile. “These aren’t normal galaxies,” Vieira said. “They’re forming stars at an extraordinary rate when the universe was very young—we were very surprised to find galaxies like this so early in the history of the universe.”

The new observations represent some of ALMA’s most significant scientific results yet, Vieira said. “We couldn’t have done this without the combination of [the South Pole Telescope] and ALMA,” he added. “ALMA is so sensitive, it is going to change our view of the universe in many different ways.”

The astronomers used only 16 of 66 dishes that will eventually come online for ALMA, which is the most powerful telescope observing in millimeter and sub-millimeter wavelengths. ALMA began observing last year.

Analysis of the ALMA data showed that more than 30 percent of the new galaxies existed just a billion years after the big bang. Only nine such galaxies were known previously. The number of such galaxies now has nearly doubled, providing valuable data that will help other researchers constrain and refine computer models of star and galaxy formation in the early universe.

Vieira’s team directly determines the distance of these dusty starburst galaxies from emission from their gas and dust itself. Astronomers previously had to rely on a cumbersome combination of indirect optical and radio observations using multiple telescopes to study the galaxies. But ALMA’s unprecedented sensitivity and ability to measure spectra enabled the astronomers to make their observations and analyze them directly in one step. As a result, the new distances are more reliable and represent the best sample yet of this population of early galaxies.

The unique properties of these objects also enabled the measurements. First, the observed galaxies happened to be gravitationally lensed—a phenomenon predicted by Einstein in which another galaxy in the foreground bends the light from the background galaxy like a magnifying glass. This lensing effect makes the background galaxies appear brighter, cutting the amount of telescope time needed to observe them by 100 times.

Second, the astronomers took advantage of a fortuitous feature of these galaxies’ spectra. Normally, more distant galaxies appear dimmer. But it turns out that the expanding universe shifts the emitted spectra in such a way that the light we receive at millimeter wavelengths is not diminished for sources that are more distant from us. Consequently, the galaxies appear just as bright in these wavelengths no matter their distance.

The new results represent approximately a quarter of the total number of sources that Vieira and his colleagues discovered with the South Pole Telescope. They anticipate finding more of the dusty starburst galaxies and expect some to be from even earlier times in the universe as they continue analyzing their data. — Steve Koppes and Marcus Woo

The South Pole Telescope is funded primarily by the National Science Foundation’s Office of Polar Programs. Partial support also is provided by the NSF-funded Physics Frontier Center of UChicago’s Kavli Institute for Cosmological Physics, the Kavli Foundation, and the Gordon and Betty Moore Foundation. 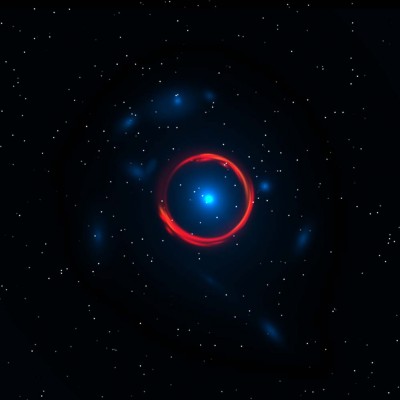 Caption: Artist’s impression of one of the South Pole Telescope-discovered sources based on observation by the Altacama Large Millimeter Array and Hubble Space Telescope (HST). The massive central galaxy (in blue, seen by HST) bends the light of a more distant, submillimeter-bright galaxy, forming a ring-like image of the background galaxy that is observed by ALMA (red). 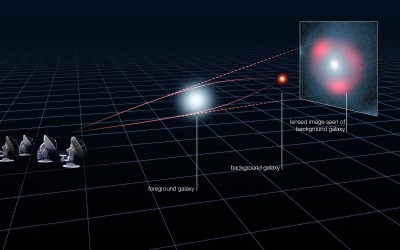 Caption: Light rays from a distant galaxy are deflected due to the gravity of a massive, foreground galaxy, as predicted by Einstein’s theory of general relativity. This makes the background galaxy appear as multiple magnified images surrounding the foreground galaxy. 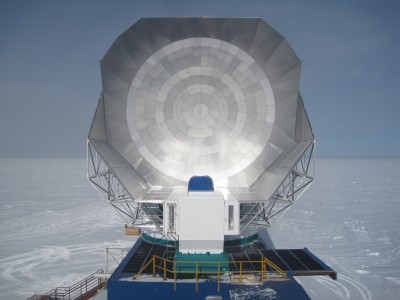 Caption: This photo of the 10-meter South Pole Telescope was taken in January 2013, soon after its new extended shielding was complete. The discovery of the luminous star-forming galaxies from the early universe were found in the large millimeter-wave survey recently completed with the SPT.