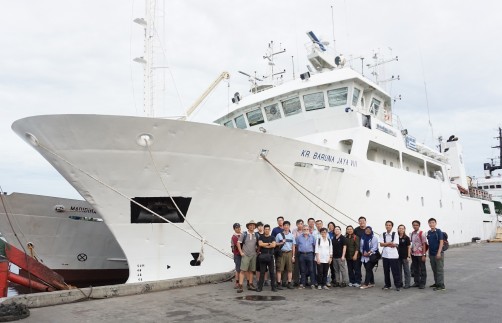 A team led by scientists from NUS and LIPI embarked on a 14-day scientific expedition on board the Baruna Jaya VIII to study deep-sea marine life in the area off the southern coast of West Java. 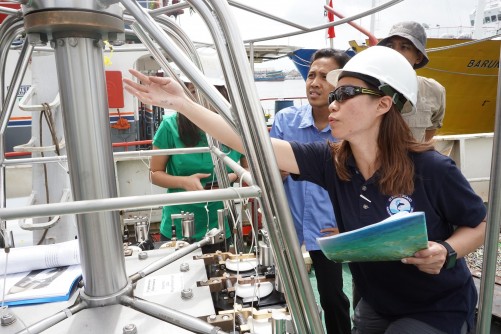 Members of the research team checking the equipment on board the research vessel Baruna Jaya VIII, in preparation for the expedition. 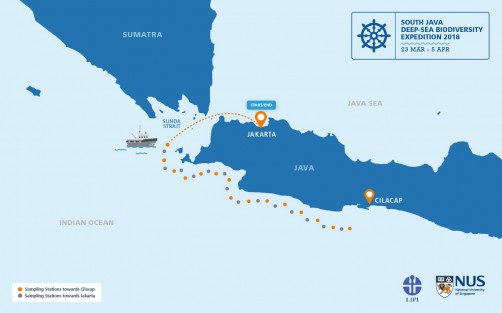 During the 14-day expedition, scientists will survey 29 sites in the vicinity of the Sunda Strait Trough off Cilacap in West Java, Indonesia

Singapore, 23 March 2018 -- A team of 30 researchers and support staff led by scientists from Singapore and Indonesia will embark on a 14-day scientific expedition to study deep-sea marine life in the area off the southern coast of West Java. Through the “South Java Deep-Sea Biodiversity Expedition 2018”, this is the first time that a concerted deep-sea biological exploration will be conducted in this largely unexplored part of Indonesian seas.

The research team will depart Muara Baru, Jakarta in Indonesia, on 23 March 2018 and return on 5 April 2018. Indonesian research vessel Baruna Jaya VIII will be used to sample the seabed at depths between 500 metres and 2,000 metres from the vicinity of the Sunda Strait Trough off Cilacap. Based on the team’s experience, the depth of 500 metres to 2,000 metres usually displays the greatest diversity with the most interesting species.

The expedition will be led by Professor Peter Ng, Head of the Lee Kong Chian Natural History Museum of the National University of Singapore (NUS), and Dr Dwi Listyo Rahayu, Senior Research Scientist at the Research Center for Oceanography (RCO) of the Indonesian Institute of Sciences (LIPI).

“This is the culmination of 15 years of discussions and explorations of possibilities,” said Prof Ng, chief scientist for the Singapore team. “This is the first time that Singapore and Indonesia are organising a deep-sea biodiversity expedition together and we are all very excited to find out what animals are present in an area that is practically unexplored by any biologist. There is certainly a wealth of biodiversity still to be discovered – much of it poorly known and new to science. We cannot conserve what we do not know.”

Dr Rahayu, who is the chief scientist for the Indonesian team, adds, “This deep-sea expedition will reveal the diversity of demersal organisms on the southwestern part of Java Island, the area where almost no exploration has ever conducted. It will certainly incite a strong maritime spirit among young Indonesian scientists participating in the expedition to go forth and seek the many interesting animals that live in the deep-waters of their country!”

The NUS research team comprises scientists from the Lee Kong Chian Natural History Museum and the Tropical Marine Science Institute, together with researchers from the Research Center for Oceanography of Indonesian Institute of Sciences.

Over the 14-day expedition, scientists plan to collect numerous samples of deep-sea marine creatures which are hard to obtain and rarely accessible, from depths up to 2,000 metres with various equipment. The expedition will focus on a variety of organisms – Crustacea (crabs and prawns), Mollusca (shells), Porifera (sponges), Cnidaria (jellyfish), Polychaeta (worms), Echinodermata (starfish and urchins), and fishes.

Prof Ng and Dr Rahayu have participated in many deep-sea expeditions in the region and they have also been involved in the discoveries of hundreds of new and rare species of deep-sea crustaceans. As the area that the team is visiting has hardly been surveyed over the centuries, they are expecting many interesting new records and rare animals, as well as new species.

Prof Ng recounted, “Our past expeditions had unearth bizarre Darth Vader like sea cockroaches, bloated oil-filled fishes with poorly developed eyes, eerie wraith-like crabs as well as spectacularly coloured lobsters. For example, during a deep sea expedition in central Philippines organised by Philippines, France, Taiwan and Singapore in 2005, we found over 1,500 species of crabs, shrimps and lobsters of all kinds, with over 150 of them new to science!”

Scientists to survey 29 sites in 14 days

This latest expedition will involve the use of various deep-sea sampling methods for qualitative and quantitative determination of benthic biodiversity. These will include dredges and beam trawls as well as a box core and a multicorer to sample the animal life in mud. Each day, the research team plans to conduct sampling at three to four sites, covering a total of 29 sites. Each sampling exercise will take at least 3 to 4 hours to complete due to the depths involved and the time it takes to deploy the equipment. Important biological samples will be sorted out, photographed, preserved and labelled on board the research vessel. Some will even be kept alive for short periods in special chilled aquariums so that they can be observed, studied and filmed.

At the end of the expedition, the samples collected will be studied by scientists from both countries. This is anticipated to take up to two years and the results will be shared and discussed with the world at a special workshop that will be held in Indonesia in 2020. The outputs will then be collated and published in the museum’s science-citation journal, The Raffles Bulletin of Zoology.

For more information about the expedition, please visit: https://lkcnhm.nus.edu.sg/research/sjades2018/