When you press the dimpled circles on a fountain drink lid, they become either convex or concave. This demonstrates bistability: materials or structures that have two stable states. Andres Arrieta has demonstrated a patterned sheet of these domes that forms an energy-storing skin, strong enough to perform mechanical tasks, and even programmable to store and process data like a mechanical computer. 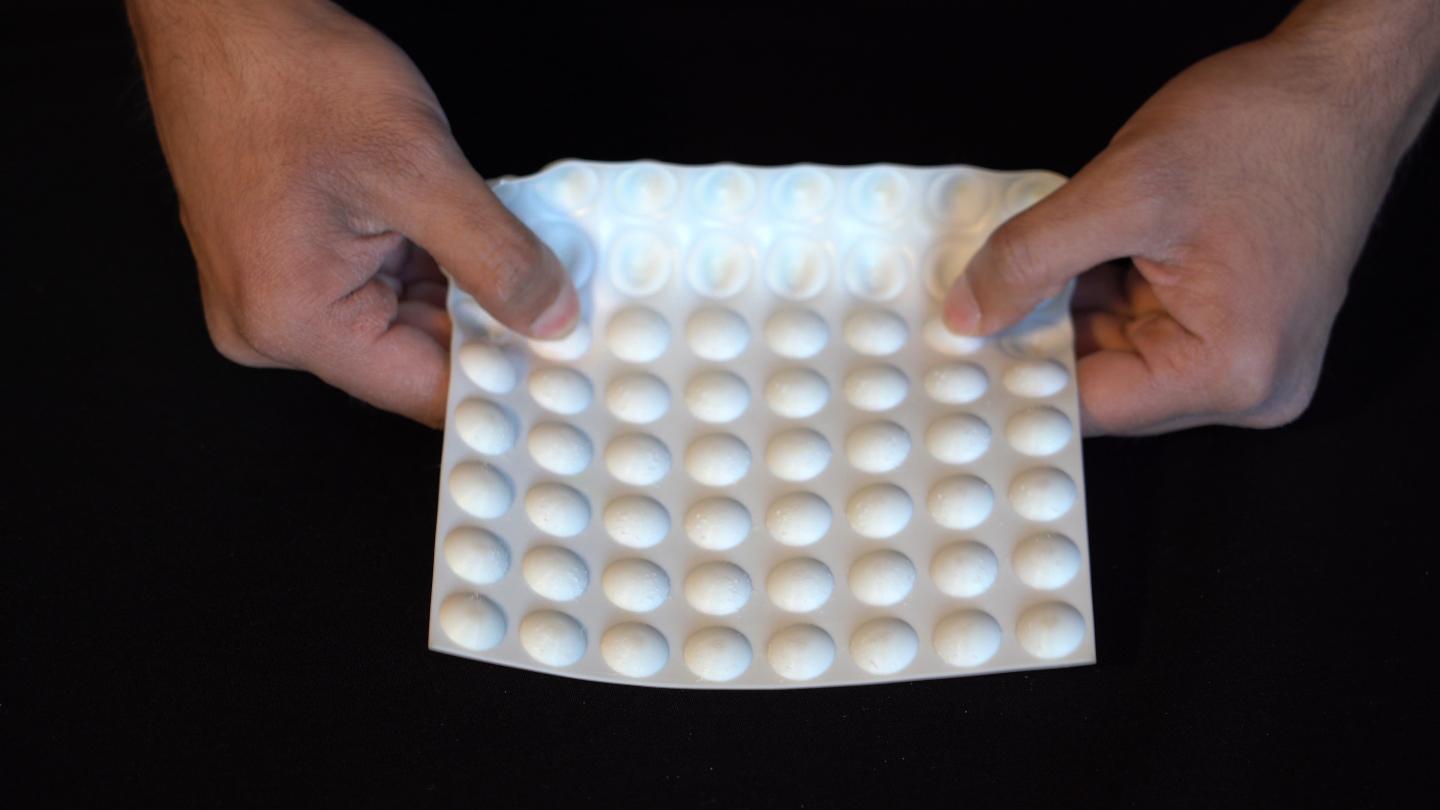 Purdue researchers have developed a way for a material to store energy in its skin through invertible domes. 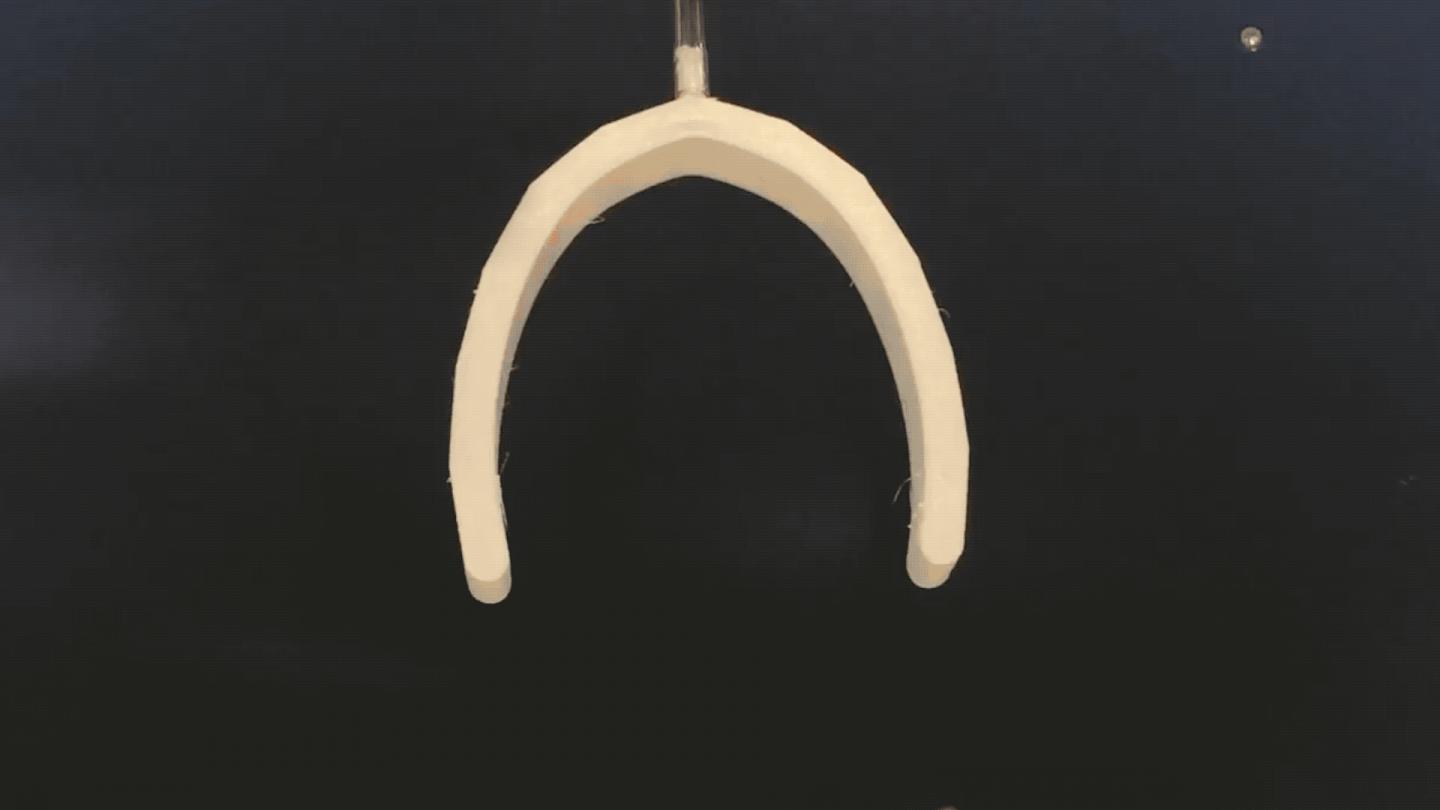 When stimulated, this material changes shape so that the robotic claw can grip an object and hold onto it without needing an external energy source.

Newswise — WEST LAFAYETTE, Ind. -- When you press the dimpled circles on a fountain drink lid, they become either convex or concave. Materials or structures that have two stable states demonstrate a concept called bistability.

A Purdue team has demonstrated that a patterned sheet of these domes will form an energy-storing skin: strong enough to perform mechanical tasks, and even programmable to store and process data like a mechanical computer.

"Bistability is an important concept found in nature," said Andres Arrieta, a Purdue assistant professor of mechanical engineering. "Earwigs, for example, have bistable, foldable wings that snap to an open state with very little energy. We are working to make programmable structures inspired from this bistability."

Arrieta's team began with a simple structure: a flat, one-inch square sheet with a pop-up dome, 3D printed from thermoplastic polyurethane. By pressing with a finger, the dome would snap to become either convex or concave. When they printed a 3-by-3 grid of these domes, they began to witness new behaviors.

"When you invert two domes that are close to another, they start interacting," Arrieta said. "And when you start making patterns of these domes on a sheet, the sheet itself begins to curve globally. Depending on which domes are inverted, you get different shapes."

They began experimenting with larger grids, pressing more complex patterns. By actuating certain domes (pressing them in or out), the sheet formed into a cylinder, a star, or a saddle shape. "These individual bi-stable domes are combining to form a new metamaterial, which itself has multiple stable states," Arrieta said. "We call it hierarchical multistability."

What can you do with hierarchical multistability? As a demonstration, Arrieta's team built a simple robotic gripper, using two lines of domes. When the domes were concave, the gripper arms stayed open. But by applying a small amount of air pressure to actuate the domes to become convex, the gripper arms closed tight enough to grasp and hold a small weight.

"Grasping something is easy, but maintaining that grasp requires constantly expending energy," Arrieta said. "This is true for both humans and machines. But what's interesting about this gripper is that when we invert the domes that make the gripper close, we are actually storing energy in the skin. The gripper arms are using that energy to maintain its grasp, rather than requiring some external energy source. In essence, we are using the structure itself as a mechanical battery."

The work has been published in the journals Extreme Mechanics Letters and Advanced Science.

Eventually, Arrieta hopes to utilize the technology in flexible robotics. "It's difficult to re-create a robotic hand that grips like a human hand because of the sheer number of motors and sensors required," he said. "But if we made the skin from these sheets and printed individual domes at different heights, then only a specific group of them would actuate at different levels of air pressure. By programming specific bursts of air pressure, we could activate a matrix of domes to create the multistable gripping states we need, with minimal energy."

In addition to varying the height attributes, Arrieta's team discovered that actuating the domes in a different order produces radically different shapes. With these three attributes - height, position, and order - even small grids of domes can produce a remarkable number of possible outcomes. This leads Arrieta to the next step: mechanical computing.

"When you think about it, these up-and-down domes are a lot like the 1s and 0s of computer data," Arrieta said. "We can imagine 'programming' a sheet like this by pressing the domes in certain locations in a certain order, and then 'reading' that data mechanically based on the shape of the sheet. This can be done without power or a central processor of any kind. In this way, future machines will function much more like animals, which use mechanical sensing and processing to react much more quickly."

While a great deal of mathematics and computer simulations contribute to this research, simply holding the patterned sheet of domes in your hands is a powerful, and oddly satisfying, investigative tool. "We didn't really understand how interesting it was until we started playing with it physically," Arrieta said. "When it comes to these domes, the whole is definitely greater than the sum of its parts."

A provisional patent has been filed for this metamaterial technology through the Purdue Research Foundation Office of Technology Commercialization (track code 2020-DIAZ-69125).

The work was funded in part by Purdue University, ETH Zu?rich, the Defense Advanced Research Projects Agency (contract No. HR00112090010), the Air Force Office of Scientific Research (grant FA9550-17-1-0074), and the European Office of Aerospace Research and Development (grant FA9550-16-1-0007). This material was based upon work supported by the National Science Foundation Graduate Research Fellowship Program under Grant No. DGE-1333468.

The properties of conventional materials result from the arrangement of and the interaction between atoms at the nanoscale. Metamaterials have shifted this paradigm by offering property control through structural design at the mesoscale, thus broadening the design space beyond the limits of traditional materials. A family of mechanical metamaterials consisting of soft sheets featuring a patterned array of reconfigurable bistable domes is reported here. The domes in this metamaterial architecture can be reversibly inverted at the local scale to generate programmable multistable shapes and tunable mechanical responses at the global scale. By 3D printing a robotic gripper with energy-storing skin and a structure that can memorize and compute spatially-distributed mechanical signals, it is shown that these metamaterials are an attractive platform for novel mechanologic concepts and open new design opportunities for structures used in robotics, architecture, and biomedical applications.

Caption: Purdue researchers have developed a way for a material to store energy in its skin through invertible domes.

Caption: When stimulated, this material changes shape so that the robotic claw can grip an object and hold onto it without needing an external energy source.