One Step Closer to a Breath Test for Lung Cancer 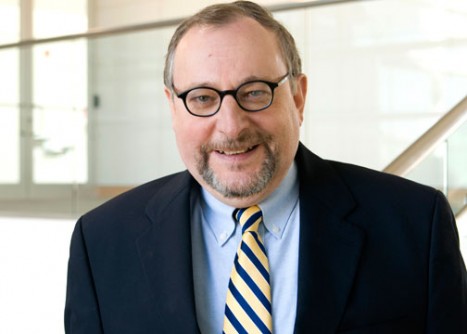 Fred R. Hirsch, MD, PhD, investigator at the CU Cancer Center and professor of medical oncology at the University of Colorado School of Medicine

Newswise — Results of a University of Colorado Cancer Center study presented at the 50th Annual Meeting of the American Society for Clinical Oncology (ASCO) show that a test of organic compounds in exhaled breath can not only distinguish patients with lung cancer from patients with chronic obstructive pulmonary disease (COPD), but can also define the stage of any cancer present.

“This could totally revolutionize lung cancer screening and diagnosis. The perspective here is the development of a non-traumatic, easy, cheap approach to early detection and differentiation of lung cancer,” says Fred R. Hirsch, MD, PhD, investigator at the CU Cancer Center and professor of medical oncology at the University of Colorado School of Medicine.

The device requires blowing up a balloon, which is then attached to an extremely sensitive gold nanoparticle sensor. The particles in the sensor trap and then help to analyze volatile organic compounds in the exhaled breath. (A USB device has recently been developed, which can be plugged into a computer for rapid analysis).

Hirsch points out the need for new lung cancer screening and diagnosis tools in the context of recent lung cancer screening guidelines by the U.S. Preventative Task Force showing that screening via low-dose computed tomography can reduce disease mortality by 20 percent. However, along with more sensitive screening comes a much higher incidence of false positives, primarily in the form of non-cancerous lung nodules.

The developing device represents a collaboration between the University of Colorado Cancer Center and researchers from the Nobel-Prize-winning institution Technion University in Haifa, Israel.

“In addition to using levels of volatile organic compounds to diagnose lung cancer, we could eventually measure the change in patients’ levels of VOCs across time with the intent of, for example, monitoring how well a patient responds to specific treatments,” Hirsch says.

A breath now and a breath after treatment could define whether a patient should stay with a drug regimen or explore other options. In fact, a study with this goal was recently initiated at the University of Colorado Cancer Center.

“If it works, you can imagine standing in the grocery store and having high risk people blow into a balloon or a USB device, and the profile of the organic compounds in their breath would tell you if they are at risk for developing or having lung cancer, which then could lead to further, focused tests,” Hirsch says.