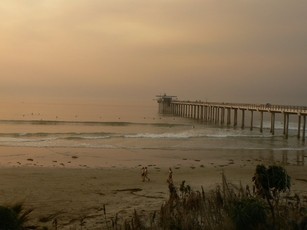 Photo by Lauren Brothers, a graduate student in chemistry at UCSD.

Scripps Institution of Oceanography Pier shrouded by smoke from the 2007 fires.

Newswise — One year ago firestorms swept through Southern California, leading to the largest evacuation in the state's history. Since then, scientists at the University of California, San Diego with expertise in atmospheric science, respiratory health, environmental economics and politics, urban studies, and the rapid collection and display of information during emergencies have focused on helping the region prepare for the next potential disaster.

Smoke in the airUC San Diego scientists have developed new chemical analyses and unique instruments that can identify and track tiny particles in smoke and pinpoint their source. One of these instruments provided a stream of real-time information on the amount of smoke in the air during the fires last year. Similar analytical instruments are aboard an unmanned aircraft that will sample California's air before, during and after any wildfires this season.

A high proportion of smoke from fires is made up of very small particles that stay in the atmosphere longer and travel farther than larger bits of soot. These minute particles can penetrate deeper into the human body where they can cause adverse health effects ranging from asthma to lung disease. Hear (http://www.ucsd.tv/search-details.asp?showID=14856) or read (http://luminance.ucsd.edu/AlteredAtmosphere) more about research on atmospheric particulates at UC San Diego.

Smoke in your lungsThe UC San Diego Medical Center treated more than 50 burn victims injured during the 2007 fires. Dozens more sought help for shortness of breath, tightness in the chest and coughing caused by breathing smoke. For most people, these symptoms last only a few days or weeks, but a small percentage experience permanent or unexpected outcomes.

Respiratory scientists are collaborating with other university departments to study the impact of particulates on the early development of chronic lung disease and related effects on the immune system.

Emergency RespondersAs a leader in disaster preparedness and emergency response, UC San Diego Medical Center was one of the first agencies to receive and care for injured victims, beginning Sunday Oct. 21, 2007. The UC San Diego Regional Burn Center treated more than four dozen burn victims: tragically, two civilian patients did not survive their injuries, but the rest of the 23 patients admitted, some in critical condition, walked out, on their own, within weeks.

Fast information in an emergencyComputer scientists at the San Diego Supercomputer Center have mapped ordinary patterns of calls to 911 and developed algorithms to detect anomalies and quickly flag them on a visual display to reveal developing trouble spots.

Kimberly Prather, Professor of Chemistry and Biochemistry, Division of Physical Sciences and Scripps Institution of Oceanography, developed the instruments used to measure and analyze smoke particles and posted the data feed during last year's fires.

Hugo Hidalgo, Project Scientist, Scripps Institution of Oceanography can discuss the climate forces that are accelerating drought and expanding the arid portions of the American West. He has found that prevailing dry conditions will creep further into forests and could potentially create more fuel for wildfires.

Mark Thiemens, Dean of the Division of Physical Sciences and Professor of Chemistry and Biochemistry, can talk about chemical analyses to pinpoint the source of smoke.

Patricia W. Finn, M.D., Director of Pulmonary and Critical Care Medicine, can discuss the importance of continued research regarding particulates and other environmental effects on the lung and long-term health, particularly in regards to exposures early in life.

Hans-Werner Braun is a Research Scientist at the San Diego Supercomputer Center. His current focus is on the High Performance Wireless Research and Education Network (HPWREN) as Principal Investigator.

Political Science, Economics, Urban StudiesSteve Erie, political scientist and director of the UCSD Urban Studies and Planning program, can talk about the region's unpreparedness, which he says results from a population that is particularly tax-averse and local governments that don't support funding of infrastructure, particularly equipment and fire-firefighting personnel.

Richard Carson, professor of economics and immediate past president of the American Association of Resource and Environmental Economists, studies preparation for, and response to, disasters. Carson and his family were evacuated during a recent firestorm. Carson says there is an absence of pre-planning and coordination with the military and with outside firefighters and equipment when it has been obvious that they would be needed.