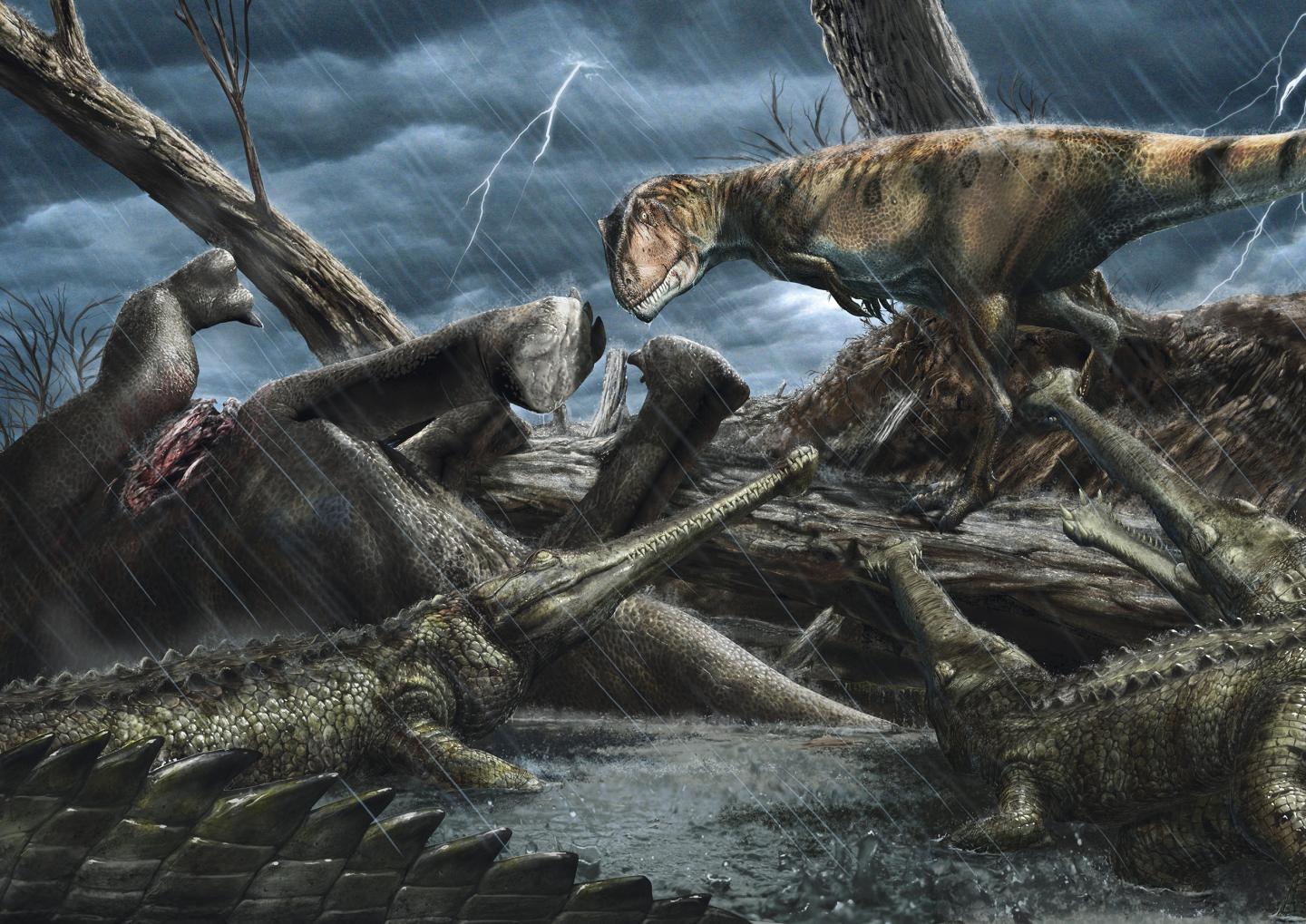 Newswise — 100 million years ago, ferocious predators, including flying reptiles and crocodile-like hunters, made the Sahara the most dangerous place on Earth.

This is according to an international team of scientists, who have published the biggest review in almost 100 years of fossil vertebrates from an area of Cretaceous rock formations in south-eastern Morocco, known as the Kem Kem Group.

The review, published in the journal ZooKeys, "provides a window into Africa's Age of Dinosaurs" according to lead author Dr Nizar Ibrahim, an Assistant Professor of Biology at the University of Detroit Mercy and Visiting Researcher from the University of Portsmouth.

About 100 million years ago, the area was home to a vast river system, filled with many different species of aquatic and terrestrial animals. Fossils from the Kem Kem Group include three of the largest predatory dinosaurs ever known, including the sabre-toothed Carcharodontosaurus (over 8m in length with enormous jaws and long, serrated teeth up to eight inches long) and Deltadromeus (around 8m in length, a member of the raptor family with long, unusually slender hind limbs for its size), as well as several predatory flying reptiles (pterosaurs) and crocodile-like hunters. Dr Ibrahim said: "This was arguably the most dangerous place in the history of planet Earth, a place where a human time-traveller would not last very long."

Many of the predators were relying on an abundant supply of fish, according to co-author Professor David Martill from the University of Portsmouth. He said: "This place was filled with absolutely enormous fish, including giant coelacanths and lungfish. The coelacanth, for example, is probably four or even five times large than today's coelacanth. There is an enormous freshwater saw shark called Onchopristis with the most fearsome of rostral teeth, they are like barbed daggers, but beautifully shiny."

Researchers from the Universities of Detroit, Chicago, Montana, Portsmouth (UK), Leicester (UK, David Unwin), Casablanca (Morocco), and McGill (Canada), as well as the Paris Museum of Natural History, have produced the first detailed and fully illustrated account of the fossil-rich escarpment, previously known as the "Kem Kem beds". The researchers now define this sedimentary package as the Kem Kem Group, which consists of two distinct formations, the Gara Sbaa Formation and the Douira Formation.

To assemble the huge datasets and fossil images, which were originally included in his PhD thesis, Dr Ibrahim visited Kem Kem collections on several continents.

Shedding light on Africa's ancient past is important says Professor Martill, "This is the most comprehensive piece of work on fossil vertebrates from the Sahara in almost a century, since the famous German palaeontologist Ernst Freiherr Stromer von Reichenbach published his last major work in 1936."

2. A copy of the paper 'Geology and paleontology of the Upper Cretaceous Kem Kem Group of eastern Morocco' is available from the Press and Media team on request.

3. The University of Portsmouth is a progressive and dynamic university with an outstanding reputation for innovative teaching and globally significant research and innovation.

It was rated 'Gold' in the UK government's Teaching Excellence Framework (TEF) and was ranked in the top 150 under 50 in the world according to the Times Higher Education rankings. The University is also 21st in the Guardian's 2020 league table and was ranked number one in the UK for boosting graduate salaries according to The Economist.

The University's research and innovation culture is impacting lives today and in the future and addressing local, national and global challenges across science, technology, humanities, business and creative industries. http://www.port.ac.uk/