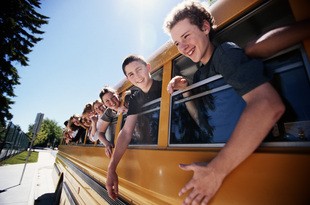 Expert from Cincinnati Children's Hospital Medical Center gives parents tips regarding bus, pedestrian and home safety to prepare their children to go back to school.

Newswise — "As children begin preparing to return to school, it's important for parents and children to go over safety tips together," says Susan Laurence, injury prevention coordinator, Trauma Services at Cincinnati Children's Hospital Medical Center. "This will help ensure a safe, enjoyable start to the school year for everyone."

Laurence offers guidelines to help parents and caregivers keep children safe during throughout the school season:

Riding the Bus and Waiting at the Bus Stop

According to the National Highway Traffic and Safety Administration, every year, approximately 475,000 public school buses travel about 4.3 billion miles to transport 25 million children to and from school and school-related activities. Although this is one of the safest ways to travel to and from school, injuries do occur. On average16 school-age pedestrians are killed by school transportation vehicles (school buses and non-school bus vehicles used as school buses) each year, and five are killed by other vehicles involved in school bus-related crashes. More school-age pedestrians are killed in the afternoon than in the morning, with 36 percent of the fatalities occurring in the crashes between 3 p.m. and 4 p.m.

According to Laurence, many injuries happen when children are boarding or exiting the bus. "A blind spot extends about ten feet in front of the bus, obstructing the driver's view," she said. "Often times, children are not aware of this blind spot and might mistakenly believe that if they can see the bus, the bus driver can see them," she said.

Children's behavior at the bus stop is a very important aspect of school bus safety. Parents need to make sure their children are aware of these safety tips while waiting for the bus:

"¢ Arrive at the stop at least five minutes before the bus arrives.

"¢ Stay out of the street and avoid horseplay.

"¢ Look before stepping into the street to make sure there are no cars passing the bus.

"¢ Wait until the bus comes to a complete stop before exiting.

"¢ Exit from the front of the bus.

"¢ Be aware of the driver's blind spot (10 feet in front of the bus) when walking away from the bus.

"¢ Ask the bus driver for help if anything is dropped while entering or exiting the bus.

While on the bus, children should observe the following safety rules:

"¢ Remain seated, forward facing at all times and keep the aisles clear.

"¢ Do not throw objects.

"¢ Do not shout or distract the driver unnecessarily.

"¢ Keep heads and arms inside the bus at all times. Parents should also make sure that they remove loose drawstrings or ties on jackets and sweatshirts that can snag on bus handrails, and replace with Velcro, snaps or buttons.

When boarding or leaving the bus, parents should tell their children to always walk in a single file line and use the handrail to avoid falls.

According to Safe Kids WorldwideÂ®, in 2001, 669 children ages 14 and under died in pedestrian-related injuries. In fact, these types of injuries remain the second leading cause of unintentional injury-related death among children ages 5 to 14. A number of national surveys on subjects relating to school safety have found that 9 out of 10 crosswalks within the vicinity of an elementary or middle school had at least one of four common hazards: cross walks in poor condition or not present; drivers failed to stop, or stopped and made illegal turns; posted speed limits during school hours were 35 mph or more; and curb ramps were either outside the crosswalk or missing. Two-thirds of drivers exceeded the posted speed limit during the 30-minute period before and after school. Motorists surveyed said that 45 percent did not come to a complete stop at stop signs and 37 percent rolled through the stop sign and seven percent did not even slow down. Another survey found that nearly 60 percent of parents and children walking to school encountered at least one serious hazard. Commonly cited hazards included lack of sidewalks or crosswalks, wide roads and speeding drivers.

Laurence recommends that children under ten never cross the street alone and offers these other safety guidelines to parents:

"¢ Choose the safest route and walk it with children.

"¢ Instruct children to recognize and obey all traffic signals and markings.

"¢ Make sure children look in all directions before crossing the street.

"¢ Direct children to not to enter the street from between parked cars or from behind bushes or shrubs.

"¢ Train children to cross the street at a corner or crosswalk.

"¢ Warn children to be extra alert in bad weather.

"¢ Inform children of the designated crossings.

"¢ Teach children to never dart out into traffic.

"¢ Demonstrate proper pedestrian safety to children by being a good role model.

"¢ A bright colored jacket might make your child more visible to traffic.

Bicycle riding is a favorite pastime of children. More than 28 million children ages five to 14 ride bicycles. Whether out of necessity or for fun, many of these children choose to ride their bikes to school. Unfortunately, bicycles are associated with more childhood injuries than any other consumer product except the automobile.

More than 288,900 ages 14 and under were treated in hospital emergency rooms for bicycle-related injuries in 2002. To keep children safe, Laurence offers these safety tips for parents of children riding bicycles to school:

"¢ Ensure children wear bike helmets at all times when bicycling. Head injury is the leading cause of death in bike crashes, accounting for more than 50 percent of bicycle-related deaths, more than two-thirds of bicycle-related hospital admissions and about one-third of hospital emergency room visits for bicycling injuries. Bike helmets have been shown to reduce the risk of head injury by as much as 85 percent and the risk of brain injury by as much as 88 percent. Over the last 10 years, 882 children have been admitted to the Trauma Service at Cincinnati Children's as a result of a bicycle-related injury. Unfortunately, only eight percent of these children were wearing a helmet at the time of their injury. Head injuries account for the most significant bicycle-related injuries, and greater than 80% of the head injuries Cincinnati Children's has seen occurred in those not wearing a helmet. This is particularly unfortunate in light of the fact that a properly fitted helmet can reduce the risk of head injury by 85%.

"¢ Teach children to follow the rules of the road. Ride on the right side of the road, with traffic, not against traffic; use appropriate hand signals; respect traffic signals; stop at all intersections, marked and unmarked; and stop and look left, right and left again before entering or crossing the street.

"¢ Do not allow children to ride on the road without direct adult supervision until age ten.

"¢ Plan a safe cycling route with children and ride it with them.

"¢ Do not let children to ride at night. The risk of sustaining an injury during non-daylight conditions (e.g., at dawn, dusk or night) is nearly four times greater than during the daytime.

"¢ Ensure schools provide cyclists with "safe areas" where there are few motor vehicles and pedestrians.

Nearly seven million school-age children per year are regularly left home alone, according to a recent report from the Census Bureau. Every year, nearly 4.5 million children ages 14 and under are injured in the home. In 2001, more than 5,526 children died from unintentional injuries; an estimated 45 percent of these deaths occurred in and around the home.

The vast majority of unintentional injury-related deaths among children occur in the evening hours when children are most likely to be out of school and unsupervised.

"Parents need to consider the many factors when leaving a child home alone," suggests Laurence. "Children mature at different rates, so it is crucial to evaluate your child's individual development as well as physical capabilities."

"¢ Place all emergency numbers (doctor, hospital, police department, fire department, poison control center, EMS) and the phone number of a friend or neighbor in a visible place near the phones.

"¢ Child should check-in with parent or neighbor immediately after arriving home from school.

"¢ Point out potential hazards in your home such as electrical appliances and heating equipment, and teach children how to avoid injury from them.

"¢ Remind your child to never tell anyone on the phone or at the door that they are home alone.

"¢ Show children where the first aid kit is and how to use the items in it.

"¢ Prepare a snack or meal for children in advance, preferably one that does not need to be heated. If it must be heated, remind children to turn off the oven or stove. Remind them to never leave a pot unattended while cooking.

"¢ Tell your children where you are, how you can be reached and when you will be returning home. Leaving your beeper or cellular phone number may help to keep you and your child more at ease.

The decision to leave children unattended may be subject to state law. Area child protection services can provide information on state child abuse and neglect laws that address the age children can legally be left home alone. Laurence recommends that children are not left alone before the age of 12.

Cincinnati Children's Hospital Medical Center is one of 10 children's hospitals in the United States to make the Honor Roll in U.S. News and World Reports 2009-10 Americas Best Children's Hospitals issue. It is #1 ranked for digestive disorders and is also highly ranked for its expertise in respiratory diseases, cancer, neonatal care, heart care, neurosurgery, diabetes, orthopedics, kidney disorders and urology. One of the three largest children's hospitals in the U.S., Cincinnati Children's is affiliated with the University of Cincinnati College of Medicine and is one of the top two recipients of pediatric research grants from the National Institutes of Health.

President Barack Obama in June 2009 cited Cincinnati Children's as an island of excellence in health care. For its achievements in transforming health care, Cincinnati Children's is one of six U.S. hospitals since 2002 to be awarded the American Hospital Association-McKesson Quest for Quality Prize for leadership and innovation in quality, safety and commitment to patient care. The hospital is a national and international referral center for complex cases. Additional information can be found at www.cincinnatichildrens.org.