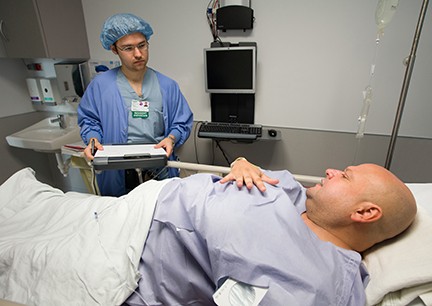 Newswise — Patients feel safer – and likely are safer – when they receive a surgical safety checklist and request that their health care providers use it, suggests a pilot study being presented at the American Society of Anesthesiologists PRACTICE MANAGEMENT 2014.

Use of the World Health Organization (WHO) Surgical Safety Checklist (SSC), a quality improvement tool released in 2009, has been reported to reduce complication rates. The SSC lists specific tasks that should be completed during different phases of surgery. Examples include: reviewing the patient’s allergies before anesthesia, confirming the surgical site before the incision is made, and ensuring sponges and other instruments have been accounted for before the patient leaves the operating room (O.R.).

Seeking ways to boost compliance of the SSC, researchers at Tulane University Hospital and Clinic decided to involve patients. Researchers found surgical teams were more likely to use the checklist when patients were informed of the list and asked their providers to be sure to follow it.

“The checklist is only beneficial when it is used, and we found that involving patients helps ensure that surgical teams complied with it,” said Seth Christian, M.D., M.B.A., director of quality for the department of anesthesiology at the Tulane University Hospital and Clinic, New Orleans. “Empowering patients to participate in their own care creates a culture of safety and makes them feel safer – and rightly so.”

While only 35 percent of informed patients had heard of surgical safety checklists, all said the SSC made them feel more comfortable going into their surgeries.

The WHO SSC is divided into three sections: sign in (prior to anesthesia), time out (before the incision is made) and sign out (before the patient leaves the O.R.). Although Tulane uses a slightly modified version to include the addition of a section on pre-procedure check-in (when the patient is in the holding area, prior to being taken to the O.R.), researchers focused the study on compliance of the items on the WHO’s version of the list.