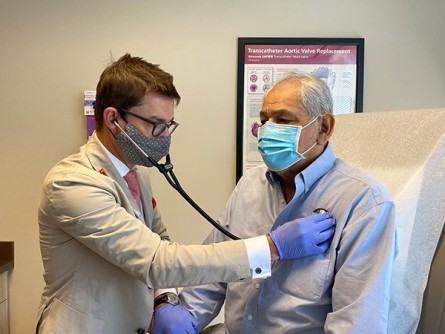 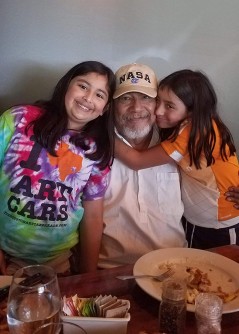 Sandoval pictured with two of his five granddaughters.

Newswise — When Rodolfo Sandoval was told he would need to undergo open surgery to repair his thoracic and abdominal aortic aneurysm, he hesitated. At 73 years old, he was worried about the recovery process for a major, invasive procedure. Then COVID-19 arrived and he made the decision that he would only consider the surgery if it became a life or death situation.

But Sandoval’s cardiovascular surgery team at The University of Texas Health Science Center at Houston (UTHealth) gave him the hope for a third option: a less-invasive procedure that would be available soon with the arrival of a global authority on innovative minimally invasive endovascular techniques to treat complex aortic aneurysms.

Sandoval and his family were thrilled when Gustavo Oderich, MD, FACS, joined the cardiovascular surgery team as a professor of surgery and chief of vascular and endovascular surgery at McGovern Medical School at UTHealth. Sandoval was able to connect with Oderich for the first time virtually through a telemedicine appointment at the UT Physicians Cardiothoracic and Vascular Surgery – Texas Medical Center location, where Oderich told him he was a good candidate for the minimally invasive endovascular surgery.

Dr. Oderich is one of ten surgeons in the United States, and the only in Houston, to have U.S. Federal Drug Administration-approved access to customizable and off-the-shelf fenestrated and branched stent-grafts to treat complex aortic aneurysms like Sandoval’s, as well as for aortic arch and thoracoabdominal aneurysms.

The aorta is the body’s largest blood vessel and it runs from the heart down the center of the chest to the abdomen. When it gets to the abdomen, the aorta gives side branches that provide blood supply to the liver, intestines and kidneys. Aneurysms occur when an enlarged area forms due to weakening of the artery wall. While an aneurysm may develop anywhere on the aorta, most aortic aneurysms develop in the abdomen below the kidneys. Aneurysm that involve side branches of the aorta are considered more complex because any open surgery carries higher risk. A complex abdominal aortic aneurysm can be life threatening if it ruptures.

Sandoval, a proud grandfather to five granddaughters, worried he might not ever regain the energy to keep up with his grandkids. His aneurysm was complex and involved the arteries that provide the blood supply to several organs in the abdomen – the liver, intestines, and kidney. “Before the surgery, I would have to pause every few minutes just to catch my breath. Just walking a short distance would leave me tired and struggling to breathe,” Sandoval said.

According to Dr. Oderich, Sandoval had a more complex aneurysm with a high risk of rupture. “Open repair can be more difficult in these situations because in order to repair the aneurism, you have to pause the normal blood supply to these organs. Through endovascular surgery, there no blood supply interruption to those organs, as well as a much lower risk of mortality,” said Dr. Oderich, who is also the clinical director for the Advanced Endovascular Aortic Program at UTHealth.

Fenestrated and branched endografts are unique because they offer much quicker recovery times and a shorter stay in the hospital. The graft is placed into the femoral artery through a needle-puncture in the skin of the groin. The holes, also called fenestrations, of the graft resemble the branches of the aortic arteries, allowing blood to flow through them.

Sandoval, who values his independence, was grateful for the swift recovery the minimally invasive procedure conducted at Memorial Hermann-Texas Medical Center allowed. “Living alone, it was nice to be able to get up and move around quickly, and to be able to do all the things I normally do around the house even after having surgery,” he said.

Now, six weeks into recovery, Sandoval is running around kicking the soccer ball with his granddaughters, and looking forward to purchasing a bicycle so he can ride around his neighborhood – all things he never imagined doing just a few months ago.

“I try not to focus too much on my age, but to be honest I don’t feel 73 anymore, I feel so much younger,” Sandoval said.