21-Feb-2017 9:05 AM EST, by Perelman School of Medicine at the University of Pennsylvania contact patient services
favorite_border 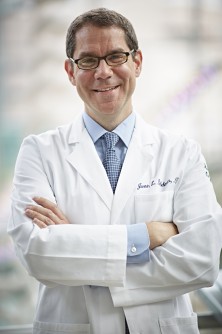 Newswise — PHILADELPHIA – Men with prostate cancer can receive shorter courses of radiation therapy than what is currently considered standard, according to Justin Bekelman, MD, an associate professor of Radiation Oncology, Medical Ethics, and Health Policy at the University of Pennsylvania’s Perelman School of Medicine and Abramson Cancer Center. In his call for practice change, Bekelman cites research showing the shorter radiation treatment – known as moderate hypofractionation – is just as effective at treating cancer, while costing less and easing the burden on patients. The commentary was published online by the International Journal of Radiation Oncology Biology and Physics and was co-authored by W. Robert Lee, MD, MEd, MS, a professor of Radiation Oncology at the Duke University School of Medicine.

“Moderate hypofractionation is high-quality, patient-friendly cancer care at lower cost,” Bekelman said. “It is equivalent to longer radiation schedules in curing prostate cancer, has similar side effects, and is more convenient. Men can get back to their lives more quickly, which means less time away from the activities they enjoy and less time distracted by their cancer treatments.”

Moderate hypofractionation uses a slightly higher dosage of radiation for each daily treatment compared to what is currently used for most other radiation regimens in the United States. Three multi-center randomized trials compared the shorter and longer approaches. All told, the CHHiP, NRG 0415, and PROFIT trials looked at 5,537 patients with mostly low and intermediate risk prostate cancer. They showed both approaches led to similar cancer control as well as similar side effects—as measured by doctors and as reported by patients themselves. The results held across different ages and races and despite the severity of the disease. There was also no change based on whether patients had undergone hormone therapy, a common treatment for prostate cancer which lowers the male hormone and can be combined with daily radiation.

Bekelman points out that fewer radiation treatments not only means less out-of-pocket costs and fewer visits to treatment centers for patients; it also means lower costs for payers and employers.

“This is a win-win-win for patients, payers, and employers,” Bekelman said, “The field of radiation oncology should be recognized for technical advances in clinical care that have achieved safe, effective, curative treatment for prostate cancer in fewer weeks.”

While moderate hypofractionation should now be discussed routinely with patients, Bekelman cautions the trials do not offer any evidence for more extreme regimens lasting as few as five radiation treatments. These much shorter courses may have additional risks and remain under study in several large U.S. and European clinical trials.

This is not the first time Bekelman has argued for moderately shorter radiation schedules. Two years ago, he found two-thirds of women treated for early-stage breast cancer in the U.S. receive longer radiation therapy than necessary, despite research that pointed to the need for change years earlier. This time around, he says he doesn’t want to see this history of overtreatment repeat itself.

“If we take a clear-eyed look at the evidence, it is unmistakable that many men can get radiation in 4 to 5 weeks, a shorter time frame than in the past,” Bekelman said. “We should move forward to adopt moderate hypofractionation radiation schedules in routine care for appropriate men with prostate cancer.”

The University of Pennsylvania Health System's patient care facilities include: The Hospital of the University of Pennsylvania and Penn Presbyterian Medical Center -- which are recognized as one of the nation's top "Honor Roll" hospitals by U.S. News & World Report -- Chester County Hospital; Lancaster General Health; Penn Wissahickon Hospice; and Pennsylvania Hospital -- the nation's first hospital, founded in 1751. Additional affiliated inpatient care facilities and services throughout the Philadelphia region include Chestnut Hill Hospital and Good Shepherd Penn Partners, a partnership between Good Shepherd Rehabilitation Network and Penn Medicine.Penn Medicine is committed to improving lives and health through a variety of community-based programs and activities. In fiscal year 2015, Penn Medicine provided $253.3 million to benefit our community.