Penn Study Shows How Misfolded Proteins Are Selected for Disposal

29-May-2014 12:00 PM EDT, by Perelman School of Medicine at the University of Pennsylvania contact patient services
favorite_border 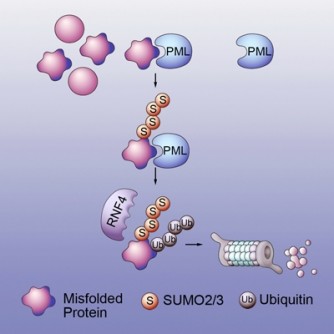 Model for protein quality control by the PML-RNF4 system.

Newswise — PHILADELPHIA – It’s almost axiomatic that misfolded proteins compromise how cells normally function and cause debilitating human disease, but how these proteins are detected and degraded within the body is not well understood. Neurodegenerative diseases – including Alzheimer’s disease, Parkinson’s disease, amyotrophic lateral sclerosis (Lou Gehrig’s disease), Huntington’s disease, and spinocerebellar ataxias – exact a devastating toll on aging populations throughout the world.

“Yet, there is virtually no cure for any of these diseases, and clinical trials have yielded mostly disappointing results, indicating that investigators are missing something fundamental about these diseases,” says Xiaolu Yang, PhD, professor of Cancer Biology, Perelman School of Medicine at the University of Pennsylvania. All of these diseases are caused by the accumulation of toxic misfolded proteins in different types of neurons. “However, our knowledge about how cells normally remove these proteins, an issue fundamental to understanding what goes wrong in neurodegenerative diseases, is very limited.”

Yang and first author Lili Guo, PhD, who was a doctoral student in the Yang lab, identified a protein recycling pathway in mammalian cells that removes misfolded proteins. Their findings appear online today in Molecular Cell ahead of the print edition. They also demonstrated this pathway’s role in protecting against neurodegenerative diseases in an animal model. Guo is now a postdoctoral fellow in another Perelman School lab.

Proteins are the work horses of the cells. They are the most abundant macromolecules, extremely versatile in their functions and critically important for virtually all biological processes. However, proteins are also highly prone to misfolding due to genetic mutations, synthetic inaccuracies, and irreparable damages. What’s more, the half-life of many proteins is relatively short, from a few minutes to a few hours, necessitating their continued synthesis. As such this puts a burden on the cell to maintain quality control in the correct folding of proteins. “This paper resolves a long-standing question in protein quality control of how misfolded proteins are precisely selected for degradation,” notes Yang. “This newly described system could be a valuable target for treating neurodegenerative diseases.”

Two-Staged RecyclingIn any normally functioning cell, two systems maintain protein quality. First, chaperone proteins, like fingers that fold paper into origami shapes, guide amino acid chains in folding into their final, proper protein forms. Second, the recycling systems dispose of misfolded proteins and ultimately breaks them up into individual amino acids. This system involves the proteasome, a protein complex found throughout the cytoplasm and nucleus of cells. "But it is unclear how misshapen proteins are recognized and shuttled to the proteasome to be degraded. This study moves the field forward because we showed that the system is common for many types of misfolded proteins,” notes Yang.

The team then went on to demonstrate the physiological importance of the elimination system using a mouse model of spinocerebellar ataxia 1 (SCA1), a fatal neurological disorder that causes problems with movement and balance. Mutations in the ATXN1 gene cause SCA1, which involves repeated segments of the DNA building blocks cytosine (C), adenine (A), and guanine (G) that appear multiple times in a row in the gene, which encodes a tract of contiguous glutamine amino acids. Normally, the CAG segment is repeated 4 to 39 times within the gene. In SCA1, the CAG segment is repeated 40 to more than 80 times, which leads to an abnormally long ataxin-1 protein that folds into the wrong 3-dimensional shape and forms clumps within the nucleus. The team showed that a PML deficiency exacerbates both the behavioral and neuropathological defects caused by the expanded CAG repeat in the SCA1 mouse, indicating that PML normally operates to protect against neurodegeneration. The PML protein is also involved in the formation of tumors, and that’s how Yang, a cancer biologist, got involved in this type of research.

“The knowledge gained from this project now provides for the possibility of new therapeutic targets for neurodegenerative diseases. Perhaps new drugs could enhance the elimination system by increasing the action of PML or RNF4, or could inhibit the inhibitors of the SUMO and ubiquitin tagging process,” says Yang.

Other co-authors are Alex Glavis-Bloom, Michael D. Brewer, James Shorter, Aaron D. Gitler, now at Stanford Medical Center, and Benoit I. Giasson, now at the University of Florida.The research was supported in part by grants from the National Cancer Institute (CA088868) and the National Institute of General Medical Sciences (GM060911). ###

Penn Medicine is one of the world's leading academic medical centers, dedicated to the related missions of medical education, biomedical research, and excellence in patient care. Penn Medicine consists of the Raymond and Ruth Perelman School of Medicine at the University of Pennsylvania (founded in 1765 as the nation's first medical school) and the University of Pennsylvania Health System, which together form a $4.3 billion enterprise.The Perelman School of Medicine has been ranked among the top five medical schools in the United States for the past 17 years, according to U.S. News & World Report's survey of research-oriented medical schools. The School is consistently among the nation's top recipients of funding from the National Institutes of Health, with $392 million awarded in the 2013 fiscal year.

The University of Pennsylvania Health System's patient care facilities include: The Hospital of the University of Pennsylvania -- recognized as one of the nation's top "Honor Roll" hospitals by U.S. News & World Report; Penn Presbyterian Medical Center; Chester County Hospital; Penn Wissahickon Hospice; and Pennsylvania Hospital -- the nation's first hospital, founded in 1751. Additional affiliated inpatient care facilities and services throughout the Philadelphia region include Chestnut Hill Hospital and Good Shepherd Penn Partners, a partnership between Good Shepherd Rehabilitation Network and Penn Medicine.Penn Medicine is committed to improving lives and health through a variety of community-based programs and activities. In fiscal year 2013, Penn Medicine provided $814 million to benefit our community.