16-Nov-2015 10:05 AM EST, by Missouri University of Science and Technology
favorite_border 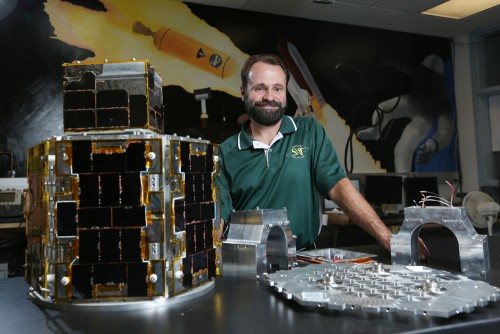 Professor Hank Pernicka and his team at Missouri S&T have developed a microsatellite imager in an Air Force contest and are working to produce the final version for delivery in 2017.

Newswise — A Missouri University of Science and Technology aerospace engineering professor is developing a microsatellite imager that could be used to check satellites, do small repairs or refuel spacecraft — and keep astronauts from making risky exploratory missions when something goes wrong.

Pernicka and his team are working off their winning model and will build the spacecraft next year. Delivery to the Air Force is in the spring of 2017. And if all goes well, from there it’s launched to rendezvous with the International Space Station.

The spacecraft is composed of two microsatellites, with MRS SAT docked to MR SAT during the launch to the space station. After a space station arm flicks the craft away from it, the first test begins. MR SAT will push away MRS SAT and use its 12 micro-thrusters to maintain a 10-meter distance between the two. If that’s successful, MR SAT then will begin to orbit MRS SAT, taking pictures of “her” with “his” two stereoscopic lenses.

Made of machined aluminum, it weighs less than 100 pounds when fully assembled. Both parts are covered in solar panels to help run the electrical systems, and MR SAT has a fuel tank filled with R-134a propellant — basically the same as the coolant found in car air conditioners or the HVAC system in a home. The tank is about the size of a 2-liter bottle of soda, only slimmer.

“It has applications for many things,” Pernicka says of the microsatellite. “It can check for damages, such as those that doomed the space shuttle Columbia.”

Heat shield tiles were damaged when Columbia lifted off, and upon re-entry those tiles failed, resulting in the space shuttle disintegrating and killing all seven astronauts on board. The microsatellite imager could have checked for damage, Pernicka says, before the shuttle began its trip home, giving NASA time to develop a repair plan.

Beyond the human factor, Pernicka’s spacecraft has other applications that are of interest to the Air Force.

“It could check on the status of spy satellites, fix components that have gone out of alignment on a spacecraft and check for debris,” he says.

Although it is only designed to be in orbit for four months, Pernicka expects to be able to communicate with MR SAT for two to four years as it begins a decaying orbit around the planet. At some point in the future, it will fall harmlessly back to Earth, just one more shooting star in the night’s sky.