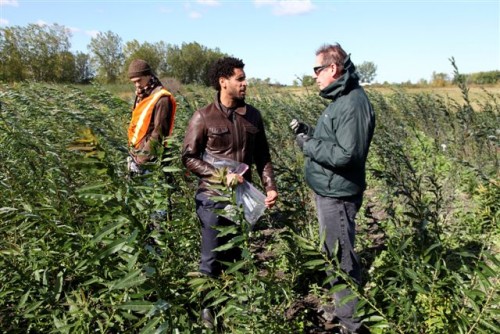 Mohamed Hijri's team evaluates the progress of work on a contaminated site in the Greater Montreal region, where they have planted cuttings that carry petrol-eating mushrooms. Print resolution available.

Newswise — MONTREAL, November 30, 2011 – Take a Petri dish containing crude petroleum and it will release a strong odor distinctive of the toxins that make up the fossil fuel. Sprinkle mushroom spores over the Petri dish and let it sit for two weeks in an incubator, and surprise, the petroleum and its smell will disappear. “The mushrooms consumed the petroleum!” says Mohamed Hijri, a professor of biological sciences and researcher at the University of Montreal’s Institut de recherche en biologie végétale (IRBV).

Hijri co-directs a project with B. Franz Lang promoting nature as the number one ally in the fight against contamination. Lang holds the Canada Research Chair on Comparative and Evolutionary Genomics and is a professor at the university’s Department of Biochemistry. By using bacteria to stimulate the exceptional growth capacity of certain plants and microscopic mushrooms, Hijri and Lang believe they are able to create in situ decontamination units able to successfully attack the most contaminated sites on the planet.

The recipe is simple. In the spring, we plant willow cuttings at 25-centimeter intervals so the roots dive into the ground and soak up the degrading contaminants in the timber along with the bacteria. At the end of the season, we burn the stems and leaves and we are left with a handful of ashes imprisoning all of the heavy metals that accumulated in the plant cells. Highly contaminated soil will be cleansed after just a few cycles. “In addition, it’s beautiful,” says Hijri pointing to a picture of dense vegetation covering the ground of an old refinery after just three weeks.

Thanks to the collaboration of an oil company from the Montreal area, the researchers had access to a microbiological paradise: an area where practically nothing can grow and where no one ventures without protective gear worthy of a space traveler. This is where Hijri collected microorganisms specialized in the ingestion of fossil fuels. “If we leave nature to itself, even the most contaminated sites will find some sort of balance thanks to the colonization by bacteria and mushrooms. But by isolating the most efficient species in this biological battle, we can gain a lot of time.”

Natural and artificial selectionThis is the visible part of the project, which could lead to a breakthrough in soil decontamination. The project is called Improving Bioremediation of Polluted Soils Through Environmental Genomics and it requires time-consuming sampling and fieldwork as well as DNA sequencing of the species in question. The project involves 16 researchers from the University of Montreal and McGill University, many of which are affiliated with the IRBV. The team also includes four researchers, lawyers and political scientists, specializing in the ethical, environmental, economic, legal and social aspects of genomics.

The principle is based on a well-known process in the sector called phytoremediation that consists in using plant matter for decontamination. “However, in contaminated soils, it isn’t the plant doing most of the work,” says Lang. “It’s the microorganisms i.e. the mushrooms and bacteria accompanying the root. There are thousands of species of microorganisms and our job is to find the best plant-mushroom-bacteria combinations.”

Botanist Michel Labrecque is overseeing the plant portion of the project. The willow seems to be one of the leading species at this point given its rapid growth and premature foliation. In addition, its stem grows even stronger once it has been cut. Therefore, there is no need to plant new trees every year. However, the best willow species still needs to be determined.

One of the best in the countryBy investing 7.6 million dollars over three years, Genome Canada, Genome Quebec and other partners are expecting concrete results in the soil decontamination market, which is estimated at 30 billion dollars in Canada alone. “The fact that the project ranked second amongst the best projects in the country took us by surprise,” says Lang who is already world renowned in genomics and bioinformatics, and who has been published in the most prestigious publications.

In the new luminous laboratories of the Centre sur la biodiversité, where Hijri just moved in with his team, everyone is very focused on the project. Over twenty people have been hired in recent months or will be shortly to see this project through.

The participation of McGill University’s Suha Jabaji and Charles Greer is an important asset for the project’s success. “This is truly an interdisciplinary and inter-institutional collaboration,” says Lang. “It’s the result of teamwork.”

“At the end of the season, it is here that we will receive the cut plant matter from our experimental land and analyze it in great detail,” says Lang surrounded by measuring equipment.

On the second floor of the Center, research agents will work at sequencing the samples. Robots and high-precision machinery worth hundreds of thousands of dollars still need to be unpacked, which shouldn’t take long seeing as investors are expecting results in the near to midterm.”

For Lang, this project is the culminating point of his career. “I was always closely tied to fundamental research. However, what we’re doing here is the fruit of the past 25 years of work. This concrete application of science could never have been possible had I not done fundamental research, and I plan on letting know our politicians in charge of financing.”

In his laboratory, five people have already been employed for the project and that’s just the tip of the iceberg. In addition to pitching in – he plans on going into the field and manipulating samples – Lang is seeing to the transfer of knowledge with the help of Univalor and the Bureau Recherche-Développement-Valorisation (BRDV). “A task that is very hard for a researcher to do early in his career,” says Lang.

Already, several companies are knocking on his door and partnership agreements are in the works. If the project leads to commercial results, Lang wants the majority of proceeds to go to research at the University of Montreal and McGill University in disciplines connected to this project. “It will be a way of ensuring that the next generation continues this work,” says Lang.The University of Montreal is officially known as Université de Montréal.