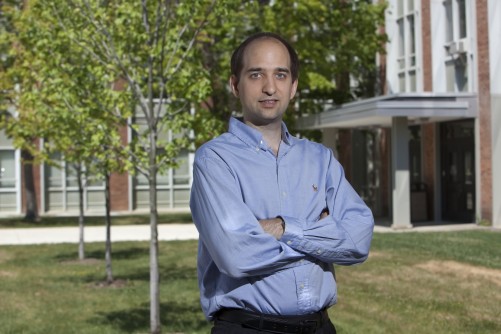 Newswise — BINGHAMTON, NY – An international team of physicists has directly observed some unique characteristics of a superconductor for the first time, according to a paper published Wednesday in the journal Nature.

Michael Lawler, a theoretical physicist at Binghamton University, contributed to the research, which he considers a great achievement for the experimentalists on the team.

The researchers use a very small tool, bringing its tip close to a sample of material they want to examine. They then apply a voltage between them and try to drive a current. In this experiment, Lawler explained, they were able to change the tip by picking up a nano-sized “flake” of a material with a normal metallic tip so they could apply voltage from one superconductor to another.

Lawler and his colleagues study a class of materials called cuprate superconductors, compounds including copper and oxygen that superconduct at relatively high temperatures (below 90-150 Kelvin). This particular experiment operated at about 50 millikelvin, which is about as cold as the research group can go, to reduce noise in the measured current.

“This is a better and different way of looking at these cuprate materials than has previously been possible,” says Lawler, who compared the new technique to the difference between looking at stars with a telescope and looking at the X-rays stars produce.

Scanning tunneling microscopes (STM) with a superconducting tip allowed the group to observe the surface of these materials in a completely new way. “Before now, what we’ve known is that there are lots of waves present in these materials. You can think of the charge changing in a wavelike pattern, where the wave is 4 atoms across.”

In this experiment, the team was able to look at the superconductivity at the atomic scale for the first time. “They’re observing that superconductivity can have waves in itself,” Lawler says. “And that’s the first time that’s ever been observed.”If you look at the amplitude of the wave, it’s relatively modest. “It didn’t surprise me, though people were hoping for something more dramatic,” Lawler says. These experiments suggest that other materials — “tuned” with different amounts of oxygen — could produce different results, possibly more dramatic waves. In principle, a room-temperature superconductor could allow electricity to travel with zero energy loss from power plants to houses and make possible advanced high-speed trains and cell phone towers. Physicists are still working to understand the origin of high-temperature superconductivity.

“I’m excited about seeing this wave that we can now probe directly,” Lawler says. “We can find out if there are materials where this dramatic wave happens. They would be different kinds of superconductors than we typically study.”