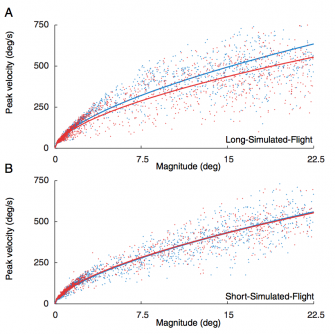 Newswise — Pilot fatigue is a major contributor to aviation disasters, but coming up with an objective measure of fatigue has long eluded supervisors in both military and commercial airlines. Standard practice involves a combination of subjective self-report measures by the pilot, and an assessment by commanding officers. With numerous factors at play, including social and financial ones, how can one objectively determine a pilot’s ability to focus and fly safely? A study published recently in the journal Psychology and Behavior unveils the potential to use changes in saccadic eye movements - the rapid repositioning of the eye to focus on a target - as a reliable biomarker for pilot fatigue. Professors Stephen Macknik, PhD, and Susana Martinez-Conde, PhD of SUNY Downstate Medical Center were co-authors in the study. “We measured fatigue in the pilots by looking at their eye movements with a camera. Eye tracking is remarkably effective at noticing small changes in brain state, because eye movements are controlled by so many levels of the brain, including low-level neural circuits that control the ocular muscles, through the cognitive decision-making system that decides where to look,” said Macknik. Study participants included US Marine Corps combat helicopter pilots, who performed oculomotor testing paired with either a long or short simulated mission. Researchers assessed the pilot's eye movements before and after each mission. Results indicated that the pilots’ saccadic eye movement velocity decreased significantly after long flights. After short flights, saccadic velocity did not change. “The pilots were doing their regular training sessions in large moving combat helicopter simulators,” Macknik said. “We measured their ability to move their eye around a TV screen before and after each training session, and hoped we would find some aspect of the training that would result in a clear change in oculomotor behavior.”

“We found that the eyes slowed down when the training sessions extended beyond one hour,” Macknik said. The short flight group’s average simulated flight time was just under one hour. The long flights averaged just under two hours.

“It’s incredibly interesting that we could reliably determine a brain-state change using a non-invasive oculomotor biomarker that is so sensitive as to measure fatigue in young, healthy military personnel, in as little as one hour,” said Macknik. “These simulator training sessions can be intense, but they are essentially not very different than playing a video game.”

“We did not expect to find such an important revelation with a short six-minute test on a healthy pilot doing standard training,” Macknik said.

About SUNY DownstateSUNY Downstate Medical Center, founded in 1860, was the first medical school in the United States to bring teaching out of the lecture hall and to the patient’s bedside. A center of innovation and excellence in research and clinical service delivery, SUNY Downstate Medical Center comprises a College of Medicine, College of Nursing, College of Health Related Professions, a School of Graduate Studies, a School of Public Health, University Hospital of Brooklyn, and a multifaceted biotechnology initiative including the Downstate Biotechnology Incubator and BioBAT for early-stage and more mature companies, respectively. SUNY Downstate ranks twelfth nationally in the number of alumni who are on the faculty of American medical schools. More physicians practicing in New York City have graduated from SUNY Downstate than from any other medical school. For more information, visit www.downstate.edu. 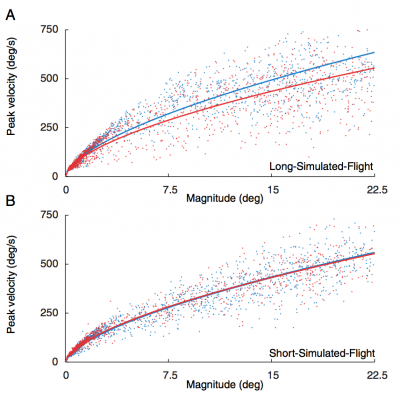 Caption: Figure: Example data from the study. Panel A shows a pilot’s peak eye velocity as a function of eye movement magnitude before (blue) and after (red) a simulated flight that was more than one hour in duration. Notice that the eye movements were significantly slower after the flight. Panel B shows the same test in a pilot who flew a simulated flight of less than one hour: there is no different in eye movement velocity before and after the flight