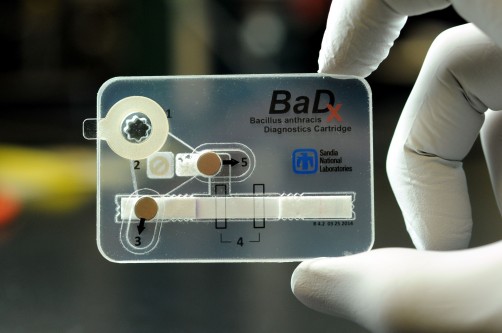 Sandia National Laboratories’ BaDx pocket-sized detector has everything needed to test a sample for anthrax.

Sandia National Laboratories’ BaDx pocket-sized detector has everything needed to test a sample for anthrax. (Photo by Thayne Edwards) Click on the thumbnail for a high-resolution image.

Bacillus anthracis, the bacteria that causes anthrax, is commonly found in soils all over the world and can cause serious, and often fatal, illness in both humans and animals. The bacteria can survive in harsh conditions for decades. In humans, exposure to B. anthracis may occur through skin contact, inhalation of spores or eating contaminated meat.

Currently, samples must be propagated in a laboratory that uses specialized tools requiring a consistent power supply not always available in the developing world, Finley said.

But another big barrier is cost.

“Farmers in many developing countries don’t make a lot of money, so they don’t pay for diagnostic testing often. When they do, they can’t afford to pay a lot for it,” said Finley.

The most common diagnostic test for anthrax costs around $30, which is out of the reach of many farmers, perhaps discouraging them from testing animals they suspect as infected, Finley said. The new device, which is more like a pocket-sized laboratory, could cost around $5-7 and does not require specialized tools to use.

The consequences of not testing animals suspected of having anthrax are life-and-death.

“Because B. anthracis forms spores when exposed to oxygen, slaughtering or opening the carcass of an infected animal places many people at risk,” Finley said.

Complex and sensitive, but simple to operateThe device requires no battery or electric power to operate. It’s hardy against wide temperature variation and can detect very small numbers of B. anthracis spores. That could make it especially useful in parts of the world where anthrax is prevalent, but refrigeration and lab facilities are lacking.

The device can be used by a trained technician in the field. The technician would put a sample swab into the amplification chamber, which contains selective growth media. The device then uses a lateral flow assay, similar to a common pregnancy test, to detect the B. anthracis. Magnetically operated valves allow the sample to advance from stage to stage to complete the testing process. A colored line will appear on the device several hours later, if the test is positive for the bacteria.

After testing, the technician can initiate a chemical process that sterilizes the device, which avoids the risk of positive samples accumulating and falling into the wrong hands. In addition to the sterilization process, the device is sealed closed, making extraction of live bacteria difficult.

“The device amplifies the B. anthracis so it can detect as few as 100 spores instead of the typical 1-10 million required for detection,” says device engineer Jason Harper.

Harper and engineer Thayne Edwards developed the microfluidics platform with the patent pending magnetic valves that move the sample through the testing process.

Lead bioscientist Bryan Carson, with technologists Jackie Murton and Bryce Ricken, developed the selective media, and worked on building and testing the device, as well as helping to develop the decontamination strategy.

Bill Arndt a researcher in the International Biological Threat Reduction Program, who regularly works in the developing world, provided guidance on device design.

The device was tested by Julie Lovchik of the Department of Internal Medicine at the University of New Mexico, using virulent strains of B. anthracis. Testing at Sandia was done using nondisease-causing strains of the bacteria.

Sandia has licensed BaDx to Aquila, a New Mexico small business that specializes in the design and manufacture of technologies and services for nuclear security and international safeguards.

“We see a lot of potential for government customers and nongovernmental organizations as well as commercial markets,” said Markku Koskelo, chief scientist for Aquila.

The team hopes to use the basic device design to develop tests for other types of disease-carrying bacteria such as salmonella and group A streptococcus, which causes strep throat. Future devices could be created to detect infectious diseases in humans and stem the spread of infectious diseases during epidemics.