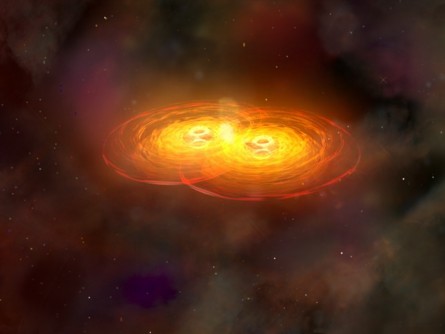 Newswise — Researchers from the University of Portsmouth have made vital contributions to the observations of four new gravitational waves, which were announced this weekend (1 December).

The new results are from the National Science Foundation's LIGO (Laser Interferometer Gravitational-Wave Observatory) and the European-based VIRGO gravitational-wave detector. The results were announced at the Gravitational Wave Physics and Astronomy Workshop in College Park, Maryland, USA.

These observations are revolutionising our understanding of the processes by which high mass stars (10 - 100 times as heavy as our sun) are formed, how they evolve, and the method by which black holes are produced.

The new events are known as GW170729, GW170809, GW170818, and GW170823, in reference to the dates they were detected. All of the events are included in a new catalogue, also released Saturday, with some of the events breaking records.

Dr Laura Nuttall, a senior lecturer in the ICG, made the initial observation of GW170729. This event, detected in the second observing run on July 29 2017, is the most massive and distant gravitational-wave source ever observed. Any theoretical work trying to understand the mechanisms by which black holes form, now must allow for black holes as massive as this one to be produced.

Dr Andrew Lundgren, a reader at the ICG, was one of the main developers of the noise subtraction scheme (described in https://arxiv.org/abs/1806.00532), which was necessary to increase the sensitivity of the LIGO observatories to be able to confirm that GW170729, GW170809 and GW170818 were genuine gravitational-wave signals. Without this work, we would only be talking about eight observed gravitational-wave signals today.

Dr Ian Harry, a senior lecturer at the ICG, is one of the two main developers of the PyCBC algorithm, which is responsible for searching for merging black holes and neutron stars in Advanced LIGO and Advanced Virgo data. This code made the first observation of many of the 11 gravitational-wave signals seen so far.

Dr Harry said: “I'm happy to see the vital contributions our researchers have made to the observation of the first 11 gravitational-wave events. Gravitational-wave observations offer us a way to observe astrophysical sources that have never been seen before, including the collision of two black holes. These observations allow us to begin to understand the processes by which black holes are produced and explore the environments in which they are formed.

“However, this is only the beginning of gravitational-wave astronomy, and as our observatories become more sensitive we expect to observe hundreds of sources in the coming years. My personal hope is that we observe something truly unexpected in the next years, which would help us to better understand the Universe that we live in. Gravitational-wave astronomy is one of the fastest growing fields in astronomy and collaboration between the new Gravitational-Wave Physics Group and existing ICG researchers offers tremendous possibilities for future world-leading research.”