The labs signed three-year Cooperative Research and Development Agreements with Peregrine Turbine Technologies of Wiscasset, Maine; Xdot Engineering and Analysis of Charlottesville, Virginia; and Flowserve Corp. of Irving, Texas."These CRADAs give us an avenue to engage industry one-on-one for what we need and what they need, and identify a pathway to commercialization of a game-changing technology," said Gary Rochau, Sandia's manager of Advanced Nuclear Concepts. "The goal is to double the efficiency of converting heat to electricity without using water and make it economical so it's as cheap as steam."

Sandia is developing supercritical carbon dioxide (S-CO2) recompression closed Brayton cycle technology, a power generation system that could yield thermal-to-electric conversion efficiency as much as 50 percent greater than conventional steam technology. Brayton cycle is named after 19th century mechanical engineer George Brayton, who developed his method of heating air in a confined space and releasing it to generate shaft power or thrust, like a jet engine.

The most common power cycle, Rankine, boils pressurized water to create steam, which is then expanded through the turbine. The cycle efficiency is about 33 percent, or 33 percent of the thermal energy delivered to the fluid is converted into electricity."One percent of efficiency in a power plant in today's market translates into millions and millions of dollars because less fuel is burned to make the same amount of electricity," Fleming said. "A one percent improvement in efficiency also reduces greenhouse gases by about 2.9 percent. Increasing efficiency to 50 percent reduces emissions by 34 percent. Consumer costs will decline as efficiency improves and fewer natural resources are consumed."

The reason for higher efficiency in an S-CO2 Brayton cycle is that a sensible temperature difference between the hot turbine discharge and the cold compressor discharge drives heat transfer within the cycle, which provides the vast majority of the heat addition to the high-pressure fluid. The heat rejected while condensing steam at constant temperature in a Rankine cycle is avoided.

Sandia has been testing various components, bearings, seals and heat exchangers near or exceeding the critical point where carbon dioxide's density is close to a liquid but with many properties of a gas. Tests showed several elements of the system hadn't reached technology maturity. "To get this to market, we needed to increase the technical readiness level of numerous components and procedures, particularly seals, bearings and heat exchangers," Fleming said.

Peregrine is working with Sandia on a thermally compliant heat exchanger that can handle the Brayton cycle's rigorous thermal stresses. "We took our expertise in the design of turbo machinery hot sections and applied it to heat exchanger design to mitigate the damage normally caused by large temperature swings," said Peregrine president David Stapp. "This design will open the door to cost effective heat exchangers that can meet customer requirements in commercial applications."Xdot is developing a foil bearing that supports a turbine shaft spinning at high speed in S-CO2. "Ball bearings don't work well in the S-CO2 environment," said Xdot founder Erik Swanson. "We have a foil bearing that can be directly lubricated by S-CO2 with better performance at lower cost -- a better mousetrap."

Flowserve's high-intensity seal for power turbines is designed to hold tight with S-CO2 going into the turbine at 1,290 degrees Fahrenheit (700 Censius) and 4,400 pounds per square inch, or psi. "That is super high temperature, super high pressure," Fleming said. "Seals can be leaky. We need a seal that won't bleed out and send CO2 into the atmosphere."Lionel Young, director of advanced technology for Flowserve, said his company started from scratch on a seal that could perform in S-CO2. "Although the high pressure and speeds for this application are not new for Flowserve, such a seal hadn't been designed for these extreme temperatures," he said. "The critical part has been the design of the secondary dynamic gasket. The seal for the most part relies on conventional technology but the dynamic gasket, which must be able to slide and seal, has to be able to work at these extreme pressures and temperatures without leakage."

Sandia offers its partners a 1-megawatt thermal S-CO2 recompression closed Brayton cycle test loop that can run dynamic tests along with dedicated test rigs for bearings and seals. Sandia's testing helps the companies prove their technologies work with supercritical CO2."Going to temperatures and pressures that far exceed typical metals is not trivial," Fleming said. "High temperature and pressure testing with supercritical CO2 is complex and testing is expensive and high risk. We're set up to do multiple large-scale demonstrations that use high temperature and high pressure. It helps get their products out to market faster and with less risk."

All three companies have made strides and developed prototypes with Sandia's technical input and testing made possible by the CRADAs, agreements between a government agency and a private company or university to work together on research and development."It's been great to work with a national lab," Swanson said. "They have incredible resources. We're sharing our technology and as the program goes on we look forward to the test data for this challenging application."

Young said Flowserve has limited ability to test at the temperature requirements of S-CO2 Brayton cycle. "While Flowserve will test a prototype at full pressure and speed, but at a lower temperature, we will depend on Sandia to test to full temperature," he said. "The collaboration between our team and Darryn and his team has been excellent. They are open and helpful and we believe the result will be to advance seal technology."

Stapp said collaborating with Sandia's experts has been invaluable. "I couldn't be happier," he said.

The goal of Sandia and DOE is to have a 10-megawatt commercially demonstrated S-CO2 Brayton cycle at the labs by 2020. "It's now time to take this technology and build test rigs," Fleming said. "A 10-megawatt electric demonstration needs to be made. That's where the commercial entities get excited. They're not interested in small laboratory units. We need a commercially scalable system."

Brayton technology can use solar, biofuels and natural gas to produce electricity for the distributed energy market, Rochau said. Distributed electrical generation is the production of power at or near point of use versus at a large-scale, central generation location requiring long-distance transmission and local distribution. Transmission and distribution typically accounts for half the cost of delivered electricity.

Rochau said Sandia is working with the three manufacturers to bring to market U.S. produced, manufactured and exportable Brayton technology. "We're helping them and they're helping us," he said. "If they see the market and we have the science, we're getting the engineering done so they can hit the market, and that cranks everything up. We don't want a novelty that nobody can use." 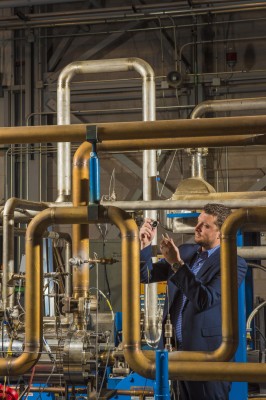 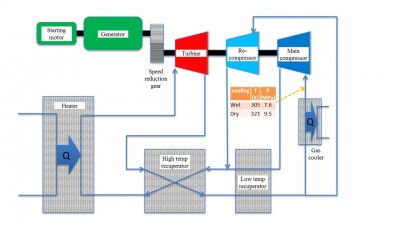 Caption: The illustration shows a recompression closed Brayton cycle with arrows indicating the flow of supercritical carbon-dioxide (S- CO2). Starting at the lower left corner, S-CO2 is heated and sent through a turbine where energy is extracted. It then goes through recuperators, also called heat exchangers, where the hot S-CO2 transfers heat to the colder S-CO2. The S-CO2 flow is then split between the compressor and re-compressor and redistributed back into the system.