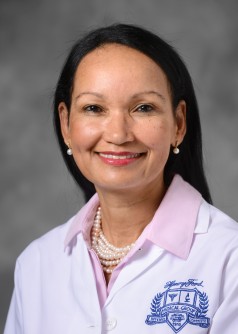 Newswise — DETROIT – Lisa A. Newman, M.D., MPH, director of the Breast Cancer Program at Henry Ford Health System, has been selected to serve as a Komen Scholar, an international advisory group of 60 distinguished scholars and leaders in breast cancer research and advocacy who have made significant contributions to the field.

Dr. Newman’s three-year term as a Komen Scholar began April 1. Susan G. Komen established the Komen Scholars program in 2010 to recognize and benefit from the extraordinary expertise and leadership within the scientific and research advocacy communities.

The scientists who serve as Komen Scholars have demonstrated an exceptional record of contributions to breast cancer research as well as a firm commitment to furthering Komen’s mission.

According to Komen, Dr. Newman’s “accomplishments and commitment have clearly established her to be an outstanding addition to this important advisory body for our organization.”

She was selected to serve as a Komen Scholar for her record of making sustained contributions to breast cancer scientific advances, demonstration of leadership in breast cancer research and in the research community, a personal commitment to conquering breast cancer, and the ability to serve as an Ambassador of Susan G. Komen to external audiences.

In her new role as a Komen Scholar, Dr. Newman will provide expertise to Komen in a variety of capacities, particularly in connection with Komen’s research and scientific programs, but also for other mission programs related to education, advocacy, and community health nationally and globally.

During the past decade, she has continued to grow her research on ethnicity-related variation in breast cancer, including triple negative breast cancer, an aggressive form of the disease that disproportionally affects African American women and young patients.

Triple negative breast cancer has been a focus of Dr. Newman’s ongoing work in Ghana, where the majority of cases are triple negative. This research seeks to advance knowledge regarding the biologic and genetic origins of this disease. Dr. Newman promotes collaborative research nationally as well, serving as Adjunct Professor of Surgery at the University of Texas M.D. Anderson Cancer Center and Adjunct Professor of Health Management Policy at the University of Michigan School of Public Health.

She also focuses on promoting academic and advocacy organizations to better serve communities in Michigan and across the U.S. She currently serves as Chief National Medical Advisor for the Sisters Network, Inc., a national African American breast cancer survivors organization.

Dr. Newman obtained her undergraduate and Masters of Public Health degrees from Harvard University. She attended medical school and completed her general surgery residency training at the State University of New York Health Science Center at Brooklyn, and completed her fellowship in surgical oncology at M.D. Anderson Cancer Center.

For more information about breast cancer care provided by the Josephine Ford Cancer Institute or to schedule an appointment, visit www.HenryFord.com/BreastCancer.