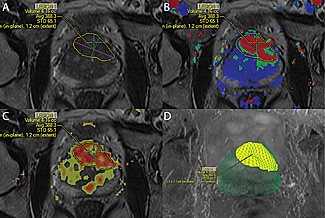 MRI technology was used to identify and locate a probable tumor (outlined in yellow) during a targeted prostate biopsy for a patient who had previously had multiple negative biopsies but had persistently high PSA levels. Resulting biospy confirmed presence of high-grade cancer.

Newswise — Oncologists at UC San Diego Moores Cancer Center are the first in San Diego to meld magnetic resonance imaging (MRI) technology with a traditional ultrasound prostate exam to create a three-dimensional map of the prostate that allows physicians to view growths that were previously undetectable.

An ultrasound machine provides an imperfect view of the prostate, resulting in an under-diagnosis of cancer, said J. Kellogg Parsons, MD, MHS, the UC San Diego Health System urologic oncologist who, along with Christopher Kane, MD, chair of the Department of Urology and Karim Kader, MD, PhD, urologic oncologist, is pioneering the new technology at Moores Cancer Center.

“With an ultrasound exam, we are typically unable to see the most suspicious areas of the prostate so we end up sampling different parts of the prostate that statistically speaking are more likely to have cancer,” said Parsons, who is also an associate professor in the Department of Urology at UC San Diego School of Medicine. “The MRI is a game-changer. It allows us to target the biopsy needles exactly where we think the cancer is located. It’s more precise.”

Armondo Lopez, a patient at Moores Cancer Center, had been given a clean bill of health using the traditional ultrasound biopsy method, but when his prostate-specific antigen (PSA) levels, a protein that is often elevated in men with prostate cancer, started to rise he began to worry. Parsons recommended a MRI-guided prostate biopsy. The new technology led to the diagnosis of an aggressive prostate cancer located in an area normally not visible using the ultrasound machine alone. The tumor was still in its early stage and treatable, said Parsons.

An early diagnosis typically improves a patient’s prognosis. In the United States, prostate cancer is the second leading cause of cancer death in men with more than 29,000 estimated deaths expected this year. The average age at the time of diagnosis is about 66.

Lopez is thankful he will be able to celebrate his 58th wedding anniversary with his wife.

“Life is going on as normal,” said Lopez. “This is the wave of the future. I see this new technology as the way to save thousands of lives. I commend Dr. Parsons for taking the lead in San Diego in this area.”

For patients, the only added step to the prostate examination is the addition of MRI imaging which occurs in a separate visit in advance of the biopsy exam. Working with David Karow, MD, PhD, a UC San Diego Health System radiologist, Parsons uses sophisticated new tools and software – DynaCAD for Prostate with the UroNav fusion biopsy system – to combine the MRI with real-time, ultrasound-guided biopsy images in the clinic resulting in what he calls a 3D road map of the prostate.

“The MRI-guided prostate biopsy will enhance the patient experience by reducing the number of false-positive biopsies and resulting in earlier diagnosis when cancer is present,” said Parsons.

UC San Diego Health System is a national leader in the use of MRI technology to guide diagnosis and treatment of various cancer including brain and prostate malignancies. In 2016, when the state-of-the-art UC San Diego Jacobs Medical Center opens, patients will have access to MRI-guided imaging and therapies that lead to more accurate cancer staging and targeted treatments.