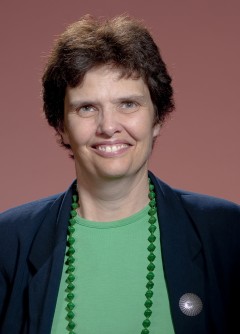 University of New Hampshire professor Nancy Kinner, director of the Center for Spills in the Environment

DURHAM, N.H. – Oil spill expert Nancy Kinner, professor of civil and environmental engineering at the University of New Hampshire, is available to comment on the deadly derailment of an oil tanker train in Lac-Megantic, Quebec, Saturday (July 6, 2013). As director of UNH’s Center for Spills in the Environment, Kinner has led workshops and briefed U.S. Congressional legislative staff members on issues regarding the transport and spill of oil products.

Nancy Kinner is available at nancy.kinner@unh.edu or 603-862-1422. UNH has a ReadyCam® broadcast studio and ISDN line on campus.

“As we continue to see an increase in oil shipments via rail and pipeline from the West to the coasts, we need to be prepared for accidents when they happen. They’re going to happen,” Kinner says. “We’ve got to be putting money into infrastructure, and we’ve got to be thinking about how to improve spill response.”

Kinner notes that the accident in Eastern Quebec, which killed at least 15 people when the unmanned Montreal, Maine & Atlantic train rolled 6 miles downhill until it derailed and exploded, was atypical. “This was a runaway. Normally these trains don’t move that fast, and their cars are developed to withstand high impact,” she says. Kinner also notes that spills from trains are generally smaller than those from pipelines due to the finite capacity of tanker trains.

Kinner is recognized as a leading independent expert on the fate of spilled oil. During the BP Deepwater Horizon oil spill, Kinner was sought after for her expertise by hundreds of national media outlets and testified before federal lawmakers three times. In addition, she has taken a leadership role in creating and disseminating scientific knowledge in support of clean-up efforts, convening several high-level meetings among spill responders, scientists, and other stakeholders in the Gulf of Mexico spill region.

The Center for Spills in the Environment (CSE), founded at UNH in 2003, addresses a range of hydrocarbon-based spill topics with stakeholders in government, industry, and academia. It draws on UNH’s expertise in marine science, ocean engineering, and environmental science and New Hampshire’s independent position as a state with no oil production or refining. The CSE is the sister center to the NOAA-funded Coastal Response Research Center (CRRC), established as a partnership between NOAA and UNH in 2004, and is part of the Environmental Research Group at UNH.

A photograph of Nancy Kinner is available to download: http://www.unh.edu/universityevents/speakersbureau/images/Nancy_Kinner.jpgCredit: UNH Photographic Services