Weepy eyes, scratchy throats and fatigue are predicted for sufferers 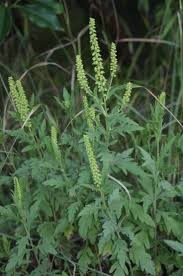 Newswise — Later summer triggers ragweed allergies in 10 to 20 percent of Americans and today spells misery for those with sensitive systems. Ragweed pollen was reported for the first time in the 2014 allergy reporting season, causing a pollen vortex of sneezing, itching and headaches for Midwesterners. “The ragweed pollen is showing up about one week earlier this year than last year,” says Joseph Leija, MD, who performs the Gottlieb Allergy Count, the official count of the Midwest. “With the high mold count and moderate weed count, the presence of ragweed will make breathing difficult for many.”

Monday, August 4, 2014, was the first count featuring ragweed. The Gottlieb Allergy Count, the official count for the Midwest, for August 4 is No Trees, No Grass, Mold High, Weeds Moderate and Ragweed Low

Typical pollen seasons are: Trees in March to May; Grass in May to June; Weeds and Ragweed in mid-August to October and Mold all season long depending on dampness.

Every weekday morning at 4:30 a.m., for the past two decades, now 84-year-old allergist Joseph Leija, MD, has climbed the stairs to the rooftop of Gottlieb Memorial Hospital, located just outside Chicago. There he maintains a scientific pollen-catching machine developed in Britain during WW II to detect poison in the air. The machine records air particles in 2- minute increments during a 24-hour period.

Dr Leija takes the glass slide with the day’s catch – during pollen reporting season, usually April through October – and under a microscope in his office, meticulously identifies and counts every spore. He uses an algorithm created by the National Allergy Bureau, to arrive at the official allergy count for the Midwest – by 7 a.m.

“People with respiratory conditions need to know the allergy count early in the morning so they can take the right medication and make adjustments in their routine to improve their health,” says the allergist who supplies area members of the media, as well as the general public, the numbers at no charge. “Several broadcast networks and Chicago’s largest newspaper report the Gottlieb Allergy Count daily so I am up at 4 a.m.to get the process started.”

Dr. Leija is the only allergist in the Midwest certified by the National Allergy Bureau to report the official allergy count of the Midwest. He follows a complex series of algorithms to arrive at the daily allergy count and his numbers are used by the association in their daily national reports of allergy activity.

The Gottlieb Allergy Count is available through Twitter: at Gottliebhospital.org and at 1-866-4-POLLEN (476-5536).