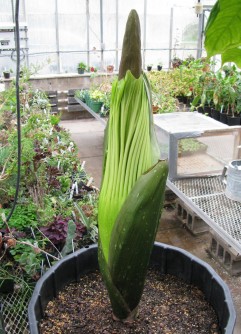 Newswise — A rare flower housed in Western Illinois University's Biological Sciences Botany Greenhouse is set to bloom within the next week, making it part of a relatively small elite group of such flowers that have bloomed in cultivation since the 1880s.

According to Jeff Hillyer, greenhouse gardner II, the Titan Arum – also known as the "Corpse Flower" thanks to a less-than-pleasant smell – is a member of the Araceae family that includes plants such as Jack-in-the-Pulpit, Calla Lilly and Philodendron. The WIU plant recently grew nearly 4 inches in a 24-hour period, he noted. It is one of four Titan Arums growing in the greenhouse.

Native to the equatorial rainforests of central Sumatra in western Indonesia, the WIU Titans were initially acquired as seeds from the University of Wisconsin-Madison in May 2002. Hillyer explained that one of Wisconsin's Titans, Big Bucky, was the ovule donor and the pollen donor was Mr. Magnificent from the Marie Selby Botanical Garden in Sarasota, FL. The seeds for both of these plants were collected in 1993 by James Symon in Sumatra while filming for Sir David Attenborough's BBC documentary "The Private Life Of Plants." The WIU plants are among the first generation of plants cultivated in the U.S.

"When one of these plants bloomed at the University of Wisconsin-Madison, more than 30,000 people viewed its splendor. It's extremely exciting that Western's greenhouse is housing the first generation of this flower grown in the U.S.," Hillyer noted. "It is pretty cool to have it in all three conditions: dormant, vegetative growth and flowering, at the same time for all to see. This is a wonderful opportunity for our students to work with a rare species."

"For most of its life, the Titan Arum grows vegetatively, producing a single, compound umbrella-like leaf. In the wild, the plant can reach 20 feet tall and 15 feet across. The Titans in the WIU Botany Greenhouse will only get about half that in size," Hillyer explained.

The bloom (or inflorescence) is composed of thousands of flowers and the nickname, Corpse Flower, comes from the blooms' odor that smells like rotting meat. In its native environment, the Titan Arum is pollinated by carrion beetles and flesh flies, which are attracted to the horrendous odor.

To view the Titum Arum, visit the WIU Botany Greenhouse from 9 a.m.-4 p.m. Monday through Friday, or keep track of the Arum's blooming process through Hillyer's blog at http://wiubotanygreenhouse.blogspot.com.

The 4,500-square-foot Botany Greenhouse, which opened in 1964, is located just south of Waggoner Hall on the WIU-Macomb campus. Plants from more than 100 families are grown in the greenhouse for teaching and research with various biology classes, as well as classes from the departments of agriculture, art and recreation, park and tourism administration.