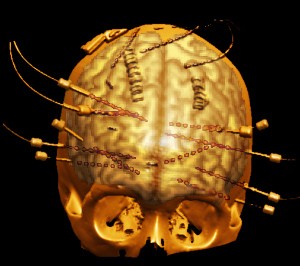 Brain scan showing electrodes that surgeons use to find and remove the source of seizures (to cure epilepsy) while sparing the source of mental functions like language.

Newswise — A study by researchers at the University of California, San Diego School of Medicine reports a significant breakthrough in explaining gaps in scientists’ understanding of human brain function. The study – which provides a picture of language processing in the brain with unprecedented clarity – will be published in the October 16 issue of the journal Science.

“Two central mysteries of human brain function are addressed in this study: one, the way in which higher cognitive processes such as language are implemented in the brain and, two, the nature of what is perhaps the best-known region of the cerebral cortex, called Broca’s area,” said first author Ned T. Sahin, PhD, post-doctoral fellow in the UCSD Department of Radiology and Harvard University Department of Psychology.

The study demonstrates that a small piece of the brain can compute three different things at different times – within a quarter of a second – and shows that Broca’s area doesn’t just do one thing when processing language. The discoveries came through the researchers’ use of a rare procedure in which electrodes were placed in the brains of patients. The technique allowed surgeons to know which small region of the brain to remove to alleviate their seizures, while sparing the healthy regions necessary for language. Recordings for research purposes were then made while the patients were awake and responsive. The procedure, called Intra-Cranial Electrophysiology (ICE), allowed the researchers to resolve brain activity related to language with spatial accuracy down to the millimeter and temporal accuracy down to the millisecond.

This is the first experiment to use ICE to document how the human brain computes grammar and produces words.

Because complex language is unique to humans, it has been difficult to investigate its neural mechanisms. Brain-imaging methods such as functional MRI are generally all that are possible to use in humans, but they blur the activity of thousands or millions of neurons over long periods of time. Consequently, scientists have been unable to determine in detail whether the mechanisms used by linguistic or computational models to produce grammatically correct speech correspond to the mechanisms that the brain actually uses.

For this study, the researchers recorded activity inside patients’ brains while they repeated words verbatim or produced them in grammatical forms such as past tense or plural – a task that humans effortlessly compute every time they utter a sentence. ICE enabled the authors to look at three components of language processing in real time, to determine whether related neuronal activities were implemented serially or in parallel, in local or distributed patterns.

“We showed that distinct linguistic processes are computed within small regions of Broca’s area, separated in time and partially overlapping in space,” said Sahin. Specifically, the researchers found patterns of neuronal activity indicating lexical, grammatical and articulatory computations at roughly 200, 320 and 450 milliseconds after the target word was presented. These patterns were identical across nouns and verbs and consistent across patients.

“The first evidence that parts of the brain may correspond to parts of the the mind was the discovery that patients with damage to Broca’s area were unable to talk but could still think. In the 150 years since this discovery, progress in understanding what precisely Broca’s area contributes to language has been disappointing,” said principal investigator Eric Halgren, PhD, professor in the UCSD Department of Radiology. “These results suggest that Broca’s area actually consists of several overlapping parts, performing distinct computational steps in a tightly timed choreography, a dance that may simply have been undetectable due to the level of resolution of previous methods.”

According to Sahin, the results help dispel a commonly taught notion that Broca’s area handles expressive language (speaking) while another part of the cortex called Wernicke’s area handles receptive language (reading and hearing). This notion is still taught in many text books.

“Our task involved both reading and speaking, and we found that aspects of word identity, grammar and pronunciation are all computed within Broca’s area. Crucially, information about the identity of a printed word arrives in Broca’s area very quickly after it is seen, in parallel with its arrival in Wernicke’s. It has been clear for some time that the expressive/receptive model is out of date, and now it is clearer that Broca’s area has several roles, in both expressive and receptive language,” said Sahin.

Images of the study can be found at: http://www.nedsahin.com/research/media_images/

Major support for the study came from the National Institute of Neurological Disorders and Stroke of the NIH, with additional support from the NIH, the Mental Illness and Neuroscience Discovery Institute at Harvard University, the Sackler Scholars Programme in Psychobiology at the Weill Medical College of Cornell University, and the Harvard Mind/Brain/Behavior Initiative.