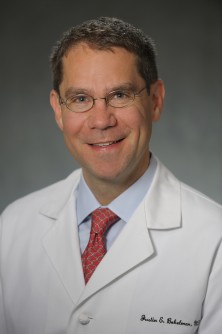 Justin E. Bekelman, MD, an assistant professor of Radiation Oncology at the Perelman School of Medicine at the University of Pennsylvania

Newswise — PHILADELPHIA— Proton therapy is in the proverbial chicken or the egg scenario. Companies are pulling back on reimbursements to treat some cancers—notably prostate, breast and lung—because of the added expense and limited evidence to back it up. But in order to demonstrate the technology’s clinical benefit—which is showing promise as a more effective and better tolerated radiation—more studies with patients are needed. So which should come first?

Both, say Abramson Cancer Center physicians Justin E. Bekelman, MD, an assistant professor of Radiation Oncology at the Perelman School of Medicine at the University of Pennsylvania, and Stephen M. Hahn, MD, chair of Radiation Oncology. In an article published today in the Journal of Clinical Oncology, the authors propose “reference pricing”—a relatively new model that establishes a standard price for different therapies with similar outcomes. It would expand the patient base because of increased, cheaper coverage and thus research to establish whether its novel advantages translate into clinical benefits.

In this case, proton therapy should be set at the less expensive rate currently paid for intensity-modulated radiation therapy (IMRT), which is covered under most insurance plans, and Medicare and Medicaid, the authors propose. Having found success with this model with private insurers since it was implemented in 2010, the University of Pennsylvania Health System is leading the way for other centers—which are popping up around the country—to make other treatments options more accessible to patients while moving the field along even further. “We want to be a responsible leader for both patients and payers,” said Bekelman. “This proposal does just that. This is an important and promising therapy for patients. We need to generate evidence to see whether proton therapy is better or equivalent to other modalities.”

Next month, the Health Technology Assessment Program (HTAP) in Washington state will decide whether and under what circumstances the state’s public payers will pay for proton therapy—a decision that could have powerful influence over payment policies of other payers in the U.S. health care system. The HTAP has a unique legislative mandate in the U.S. to evaluate health technologies and translate evidence of comparative and cost effectiveness into payment policy.

This examination of proton therapy comes at decisive moment, as major insurers have recently announced policies that restrict coverage for proton therapy for certain cancers.

“HTAP should not follow suit,” said Bekelman. “We propose a better way forward with reference pricing. By linking payment for proton therapy to evidence development, we echo prior calls to tie reimbursement for unproven technologies to the broad mandate of comparative effectiveness research with randomized trials.”

When compared to conventional radiation therapies, proton therapy stands to offer several benefits for patients who are candidates, including decreased radiation to normal tissues, decreased side effects and complications, and the ability to re-treat tumors after recurrences. Every day, over 100 patients are treated at Penn Medicine's Roberts Proton Therapy Center. Several studies have shown such advantages, but what’s lacking is randomized clinical trials.

Moving forward, the authors call for the HTAP to lead the way by deciding on behalf of its public payers to cover proton therapy under a policy of reference pricing with evidence development. They also call for a national proton therapy clinical trials consortium, led by physicians, and comprised of patients, payers, federal agencies, and device manufacturers, to jump start, design and fund research-related costs for high-quality multi-center comparative effectiveness studies.

“The tradeoff is justifiable,” the authors write. “We will have reduced reimbursement, at least for a time, to promote evidence generation for a technology that or may not lead to better outcomes for great number of patients.”

“This will preserve access to the technology and renew efforts to conduct crucial research,” they add.

Editor’s note: Dr. Bekelman served as a technical advisor for the Institute for Clinical and Economic Review’s critical appraisal of the evidence for proton therapy for the Washington State Health Technology Assessment program.

###Penn Medicine is one of the world's leading academic medical centers, dedicated to the related missions of medical education, biomedical research, and excellence in patient care. Penn Medicine consists of the Raymond and Ruth Perelman School of Medicine at the University of Pennsylvania (founded in 1765 as the nation's first medical school) and the University of Pennsylvania Health System, which together form a $4.3 billion enterprise.The Perelman School of Medicine has been ranked among the top five medical schools in the United States for the past 17 years, according to U.S. News & World Report's survey of research-oriented medical schools. The School is consistently among the nation's top recipients of funding from the National Institutes of Health, with $392 million awarded in the 2013 fiscal year.