A popular professor of anthropology will put his primitive-technology skills to the ultimate test for a new television series being filmed around the globe.

Bill Schindler recounts his personal journey at Fall 2014 Convocation, and delights the audience by stripping off his academic robes to showcase his handmade buckskin tunic. 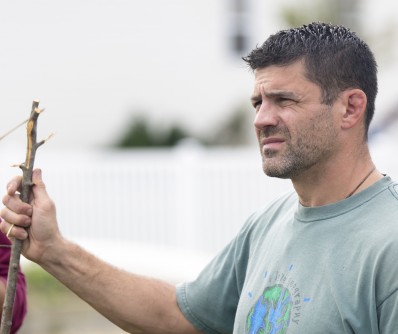 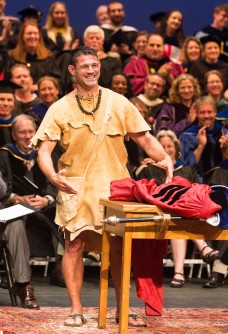 Schindler shows off his handmade buckskin tunic at Fall Convocation.

Newswise — CHESTERTOWN, MD—The world will soon be able to witness what the Washington College community has long known: professor Bill Schindler walks his talk in anthropology, teaching in a very hands-on way about archaeology and primitive technology. Later this month he will begin filming a new series for the National Geographic Channel (NGC) tentatively titled “The Great Human Race.” Set to air in 2016, the show will retrace the migratory route of our ancestors from the roots of humanity in Africa to the “New World” of North America.

Schindler’s “co-star” will be Cat Bigney, a bushcraft and primitive skills expert who teaches at the Boulder Outdoor Survival School in Utah. Each episode will drop the two into a time and place from our evolutionary past. Their only means of survival will be the period-correct tools available to our ancestors, and they will have to overcome some of the same threatening environments of each era, from the humid jungles of Kenya and dry deserts of Egypt to the icy mountains of Ethiopia and snow-covered tundra of Alaska. They will have to rely on their expertise, instincts and limited resources for survival. That means Professor Schindler will do much of what he does in his teaching: building tools and weapons out of stone, hunting and foraging for food, starting fires, and creating shelter. An associate professor in anthropology and archaeology at Washington College, Bill Schindler has been trained by some of the leading archaeologists, experimental archaeologists and primitive technologists in the world. He passes his knowledge and experience along with what he calls a "sole authorship" approach to teaching, a philosophy he discussed in January when he delivered the keynote address at the world’s largest experimental archaeology conference in Dublin, Ireland. He defines it as having students start at the earliest stage of any process they are studying, and follow it through to the end product: “For example, if they are learning about prehistoric leather clothing, they would butcher and skin the deer, flesh and de-hair the hide, brain-tan the deerskin, research different forms of buckskin clothing, tailor clothing using traditional methods, wear the clothing and then ... have an informed discussion about it.”

The recipient of the 2014 Distinguished Teaching Award from the Alumni Association, Schindler is known for engaging students in first-hand experiences that teach them about primitive technology and our relationship with food. This is a professor who shapes his own hunting tools, makes use of every part of the animal, forages for wild edibles and bakes bread with wheat he milled and in an oven that—you guessed it—he made himself.

He knows he will put his knowledge and expertise to the ultimate test during the filming for “The Great Human Race” but says he’s more excited than nervous. “I am thrilled with the work of the National Geographic team and their strict standards of authenticity,” he says. “There is so much we don’t know about the past, but they have been awesome about keeping it as accurate as possible both scientifically and historically. I will literally be recreating prehistoric life, as we understand it, during some of the most significant technological milestones in our evolutionary past, and doing it in the actual locations where they took place. No one has ever done this before. It’s as if I have been training for this my whole life! I’m going to come out of it with an entirely new perspective on the past. And, I know the experience is going to make me a much better teacher and scholar.”

Schindler expects to be winging his way to a remote part of Africa for the first weeks of filming around April 25. As the filming continues, he will miss the fall 2015 semester but says his faculty colleagues have been very supportive and “really pulled together to make sure I could take advantage of this opportunity.”

The hardest part for Bill Schindler won’t be eating insects, sleeping in trees or enduring rough weather. It will be missing his family — wife Christina and their three children, ages 11, 9 and 7. “That will definitely be tough. This will be the longest I’ve ever been away.” 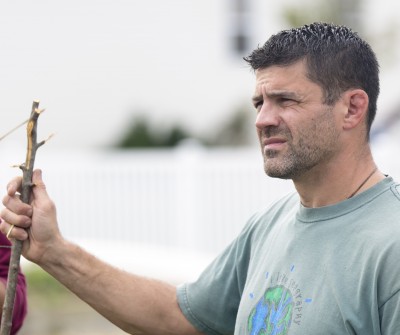 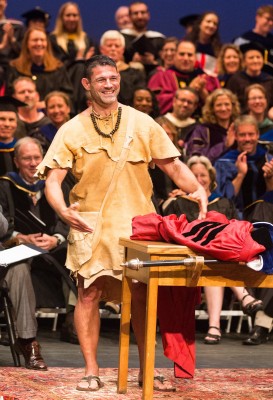