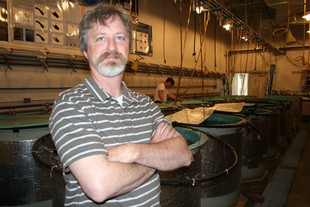 That's one finding in a study by recent Ph.D. graduate Trevor Selch and his adviser, adjunct associate professor Steve Chipps of SDSU's Wildlife and Fisheries Sciences Department. Chipps is also assistant unit leader for fisheries with the South Dakota Cooperative Fish and Wildlife Research Unit, a part of the U.S. Geological Survey.

Chipps said the study helped answer why South Dakota first began to see high mercury levels in fish from some lakes in the years after about 2000 — first in Bitter Lake, then in other lakes that include Highway 81 lakes, Lake Isabel, Lake Hurley, North Island Lake, Pudwell Dam, Roosevelt Lake, and Twin Lakes.

"By the time we got started with the research in 2004, we had about six lakes that had mercury advisories on them," Chipps said. "The question was, why do these particular lakes have high mercury concentration? Prior to that in South Dakota we really hadn't had any mercury advisories to speak of."

Though the health benefits of eating fish are well documented, human exposure to methylmercury from contaminated fish can pose a variety of health risks, with the severity depending on the amount of mercury consumed. The fetus and young children are considered much more sensitive than adults. Frequent exposure during childhood can damage the central nervous system and affect neurological function (with possible effects on learning, muscle development, motor function, and attention). In adults, high levels of mercury can harm the kidneys and brain and have also been linked to increased risk of cardiovascular disease.

Chipps said that research from other Midwestern lakes doesn't explain high fish mercury concentrations in South Dakota's lakes. The scientific literature suggested that lakes with low pH and low in productivity tend to have higher mercury levels. But in South Dakota, many lakes tend to have elevated pH levels, and those with high mercury levels are generally productive water bodies.

Chipps said Selch studied Landsat satellite imagery for the years since the 1980s to pin down the connection to surface area.

"He was able to look at the satellite images and then digitize the lakes before they flooded and then after they flooded," Chipps said. "And what we found was that lakes that expanded dramatically tended to have higher mercury concentrations than those that didn't expand as much."

The finding makes sense because there is mercury in the atmosphere from sources such as coal-fired power plants, and some of that mercury is continually deposited on the earth's surface. When lakes expand their surface area, more of that mercury ends up in the water and in the food web.

"It's tied pretty strongly to the atmospheric deposition, which is to a large extent human-induced. But what's incorporating it into our lakes is the natural cycle of wet and dry periods," Chipps said.

Some South Dakota lakes with elevated mercury concentrations don't show very good natural reproduction in walleyes and perch, Chipps noted — a fact that could be related to a range of factors, including lack of suitable spawning habitat. But the SDSU study included lab experiments to assess mercury as a factor in reproductive success.

"Our highest concentration was about 1 milligram of mercury per liter, which is pretty high for methylmercury concentration in the water. It's higher than what we would see in the natural environment. We just wanted to be sure we were covering the extremes. And there our fertilization success was only about 10 percent," Chipps said.

Though the experiment doesn't address other factors in reproductive success in fisheries, Chipps said, it clearly shows that high concentrations of mercury in water have a negative effect.

The SDSU researchers also looked at how mercury concentration varies seasonally in fish.

"What we found pretty consistently is that mercury concentrations in walleyes were significantly higher in the spring, and then they tend to decline into summer and into the fall. The reasons for that, we think, is that over the winter the fish aren't growing very much because the temperatures are cold. They still eat so they're accumulating mercury, but they're not growing very much. So by early spring those fish tend to have elevated mercury concentrations."

Over the summer, as water warms up and fish eat more and grow more, a factor called "growth dilution" kicks in. The fish's total mercury burden doesn't decrease, but the concentration is diluted as the fish gets bigger.

"Right now we have fish consumption advisories that describe how many fish to eat from the lakes that have advisories on them, and that's separated into a sensitive population, which would be pregnant or nursing women and children, and then the rest of us," Chipps said. "We think we can improve upon that by providing more information about the seasonality of mercury levels in fish so that anglers can make better decisions about when and how many fish to consume."

A map and a table of study results from different lakes are available at the following links. "Hg" is the modern chemical symbol for mercury. The measurement in walleye from various lakes that is described in one column of the table is micrograms of mercury per gram of fish: