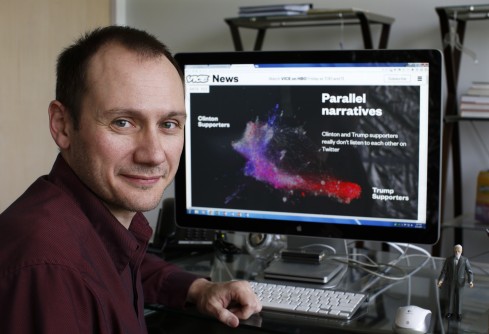 NMSU psychology associate professor Igor Dolgov, co-authored the paper, “The dark side of technology: An experimental investigation of the influence of customizability technology on online political selective exposure.” 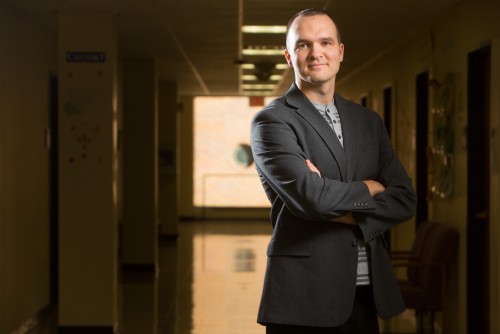 Ivan Dylko, former NMSU assistant professor in communication studies, currently at the State University of New York at Buffalo, co-authored the paper on the influence of technology on online political exposure.

Newswise — While pundits and news outlets claim political polarization in America is at an all-time high since the November 2016 election, a study led by New Mexico State University researchers may have discovered one of the factors driving it – customization technology.

“The MIT folks and others mapped out the social network sphere looking at the reds and blues and how they don’t talk to each other,” said Igor Dolgov, NMSU psychology associate professor, “but we are only one of two research teams to have tested the proposed mechanisms experimentally.”

In a paper, published in “Computers in Human Behavior,” the group investigated the influence of customizable technology on political exposure. Dolgov and Ivan Dylko, former NMSU assistant professor in communication studies, currently at the State University of New York at Buffalo, are the lead authors of the article titled “The dark side of technology: An experimental investigation of the influence of customizability technology on online political selective exposure.” Omar Aiziz, NMSU computer science instructor and William Hoffman, Nicholas Eckhart, Maria Molina, NMSU graduate alumni, are co-authors.

“This is a study of natural behavior when browsing a website,” Dolgov said. “It’s the only real study of this behavior without prompting people about things like elections.  Ultimately what we found is customization technology is increasing political selective exposure. It’s essentially keeping people away from alternative viewpoints.

“I’m a psychologist. This is a perfect example of in group/out group biases where you like the group of people in your group and demonize everyone else. This is why this has become such a heated separation in the country right now.”

In Phase 1, the research team surveyed 600 students in psychology and communication classes at NMSU to determine their political affiliations and opinions on key issues such as healthcare and taxes.  To execute Phase 2, NMSU researchers then invited them to participate in another, seemingly unrelated study a month later, asking their opinions of a new website for online news. Nearly 100 of those students who were surveyed in Phase 1 also completed Phase 2, which required them to browse websites containing news content regarding key political issues, in as natural an environment as possible. Their browsing behavior and choices were monitored for five minutes.

Participants were not told about the connection between the two phases of the research, nor about pre-customization of the website.  There were four groups: a control, for whom the website was not customized in advance and could not be changed; a second group, who had the site customized for them based on their survey responses but were not allowed to modify the content; a third group, which was allowed to customize their browsing and without having the site customized for them in advance; and a fourth group, which was shown a pre-customized website that they could change further, selecting the types of articles they wished to see.

“One of the things we found in the end was both system-driven (pre-configured) customizations and user-driven customizations create these filter bubbles and echo chambers,” Dolgov said. “One of the more impactful findings from the paper is when you look at people who are moderate to start with, when they customize content or content is customized for them, they are driven toward the extreme and so are the choices they are making.”

Previous research in this area, Dolgov explained, showed when there was system-driven and user-driven customizability and users are given the choice to see other opinions, they would customize to seek alternate opinions.

The NMSU research demonstrates the opposite effect.

“We observed natural behavior,” Dolgov said. “We showed even if you pre-customize for them and give them the option to get out of that shell they don’t get out. They may seek one or two alternative opinions, but generally they will customize away from alternative opinions.”

The next step in the research is to solve some of the study’s limitations by creating a larger sample size from two universities and observing the natural browsing experience for a lengthy period of time. Instead of a computer lab experience for five minutes, the participants will go to a functional website and the researchers will collect more organic data in real time with permission of the users. They plan to explore issues of why moderates are being pushed toward extremes and why those with extreme views respond the way they do to alternative viewpoints.

“The other component is how can we actually promote democracy? Technology is actually prohibiting the deliberative process,” said Dolgov. “So it’s an interesting question as to whether technology could actually be used to bring people back to the center.” 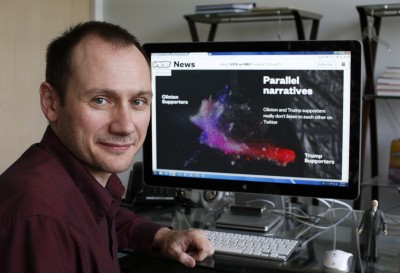 Caption: NMSU psychology associate professor Igor Dolgov, co-authored the paper, “The dark side of technology: An experimental investigation of the influence of customizability technology on online political selective exposure.” 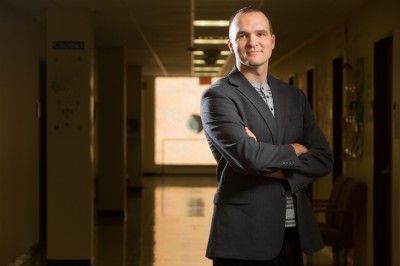 Caption: Ivan Dylko, former NMSU assistant professor in communication studies, currently at the State University of New York at Buffalo, co-authored the paper on the influence of technology on online political exposure.